If you’ve been on the internet lately, chances are good that you’ve come across a video or two of a computer-generated President Obama, weird dog alien things or your friends pole dancing, banging on drums or singing “Let It Go.”

That’s because the internet gods — or really, Huanshi Ltd., a Chinese app developer — have seen fit to bestow upon us an iPhone app called MyIdol that lets you take selfies or import photos and, well, do things to them.

Essentially you’re creating an interactive, three-dimensional avatar. The interface, which is entirely in Chinese, can be a little hard to navigate, but because we love you so much, we’re going to walk you through it with this little explainer. 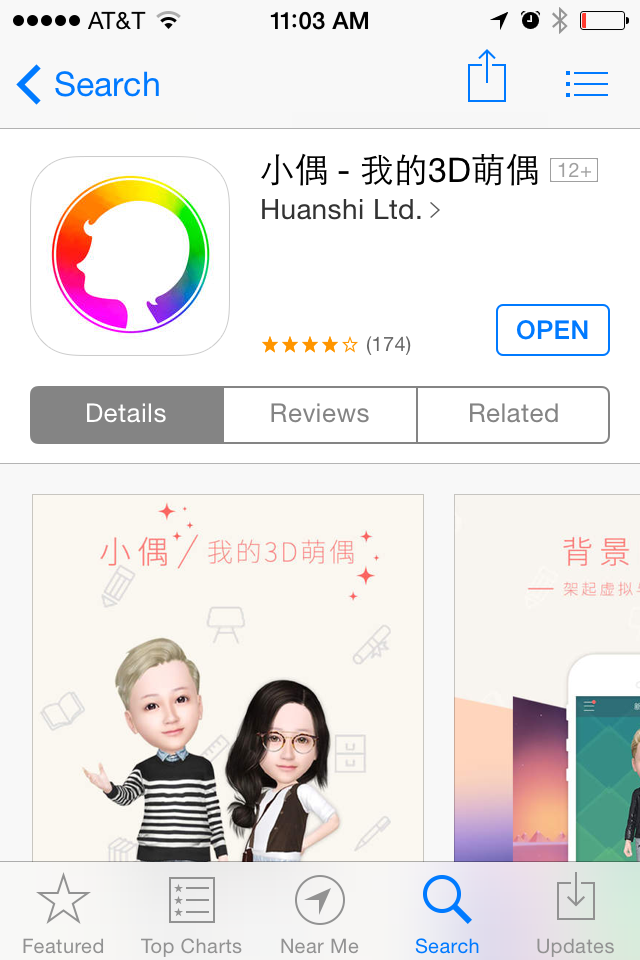 Obviously. It’s trending right now in the app store and easy to find, but there are also plenty of copycats out there. The first thing you’ll get is a video explaining how the app works. It’s in Chinese, but you’ll be able to get the gist — take your photos in good light, keep the camera straight, etc.

After the app loads, you’ll get a picture that looks a little like this. You need to tap the icon with the plus sign in the upper right corner: 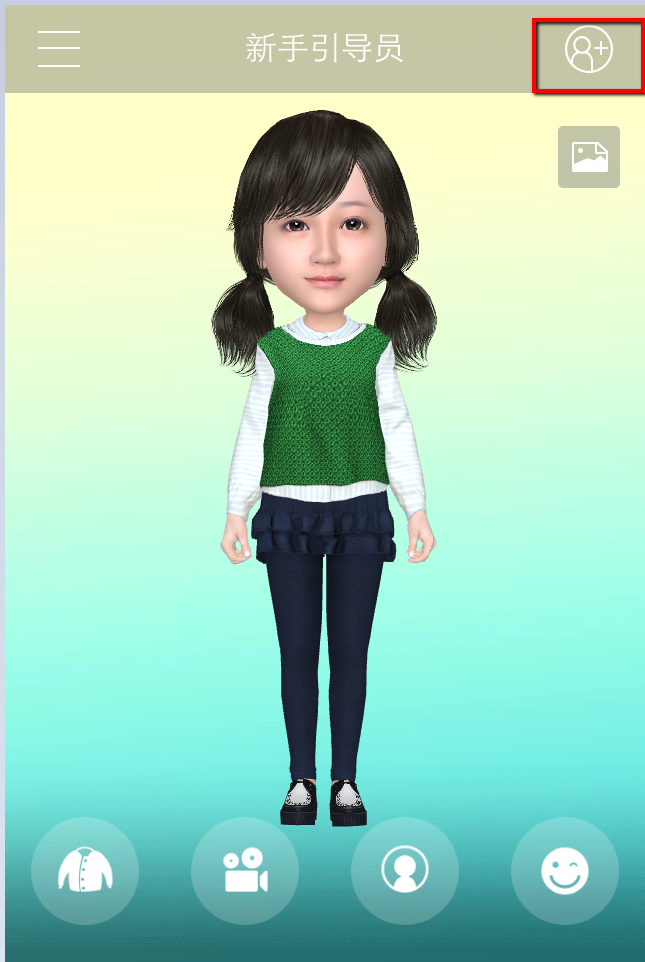 And then the green camera icon at the bottom of the next screen: 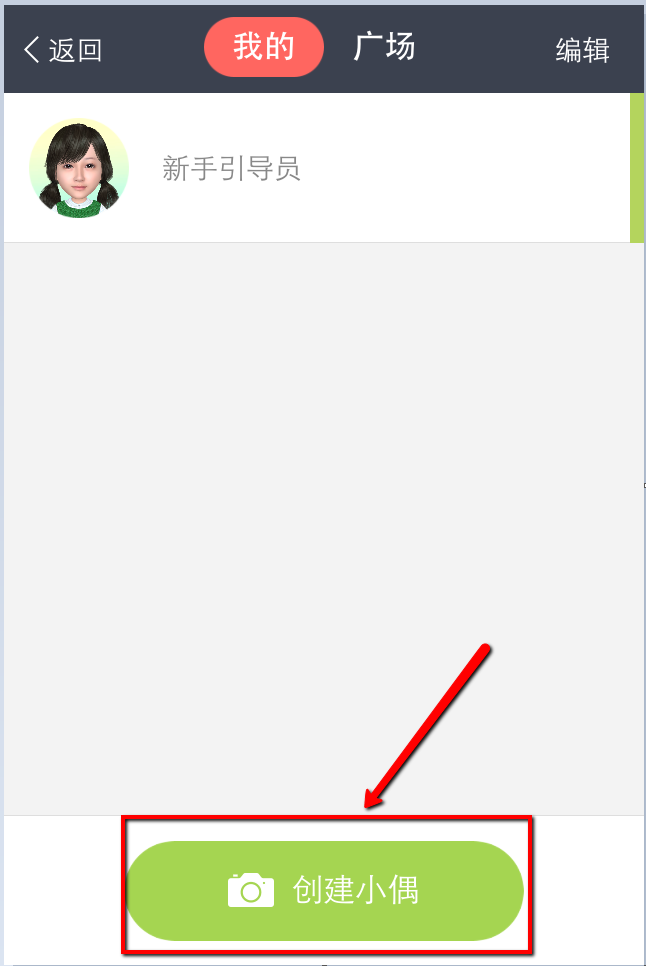 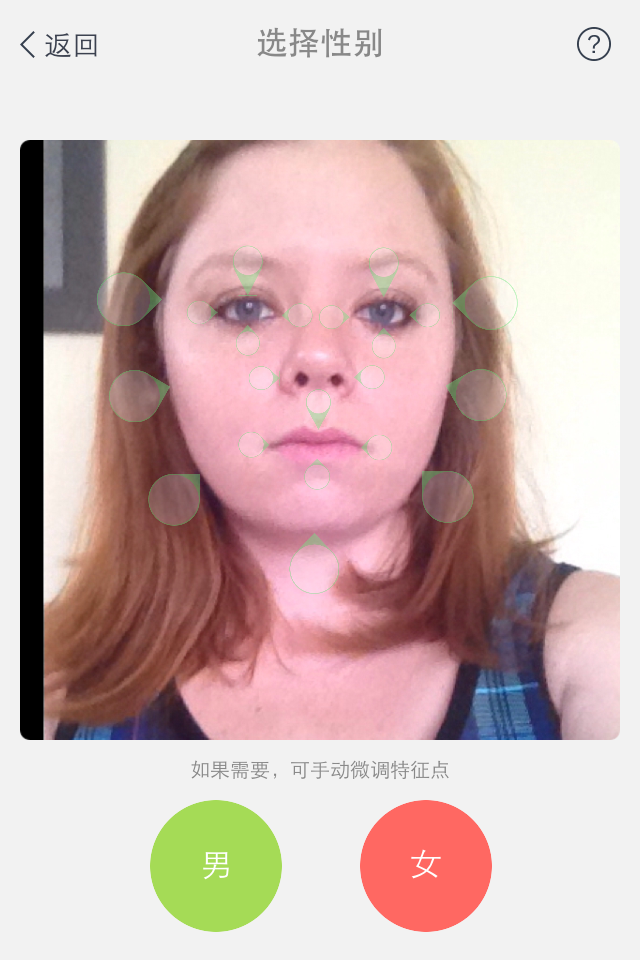 You get to take the least intuitive selfie ever. Straight on, lots of light, no weird angles. Mug shot style, basically. If I look angry, it’s because I haven’t had all the coffee in the house yet. If it isn’t perfect, no worries. When you click on one of those little green tags, it’ll show you where they are supposed to touch your face. Just drag them around until they are in the right spot.

Also — I didn’t figure this out until later — but those two circles refer to gender. The default is the green one, male. If you’re a lady, tap the red one. 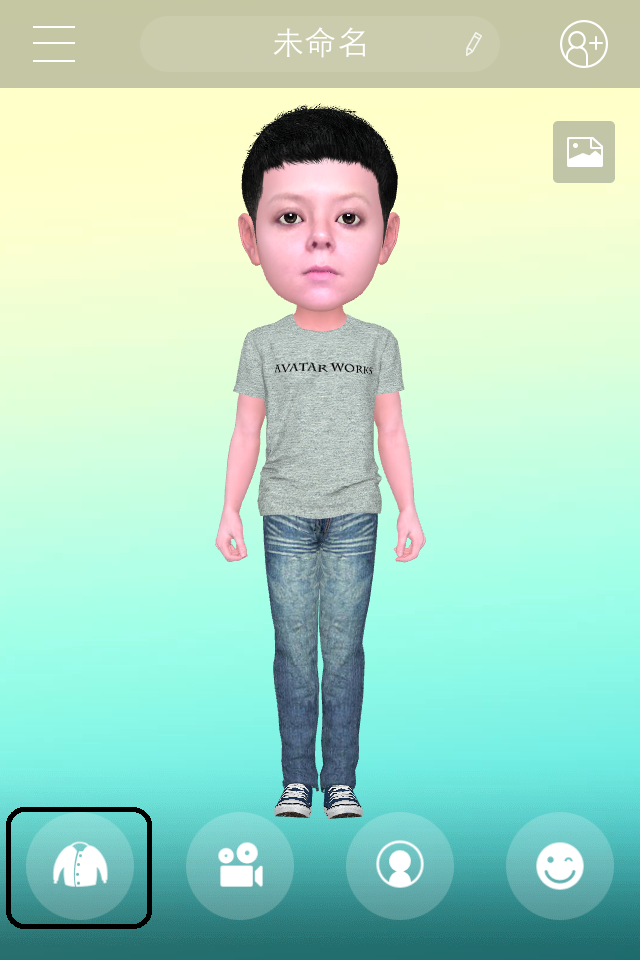 The first avatar that will pop up is this generic dude in a gray tee and jeans. You can tell I hadn’t figured out the gender thing yet, but I think I look pretty handsome.

At the bottom of the page are four buttons, and they are extremely fun to push. The first one is this little shirt icon.

It brings you to a full menu of clothing, hair, accessories — everything. The stopwatch helps you adjust your age: 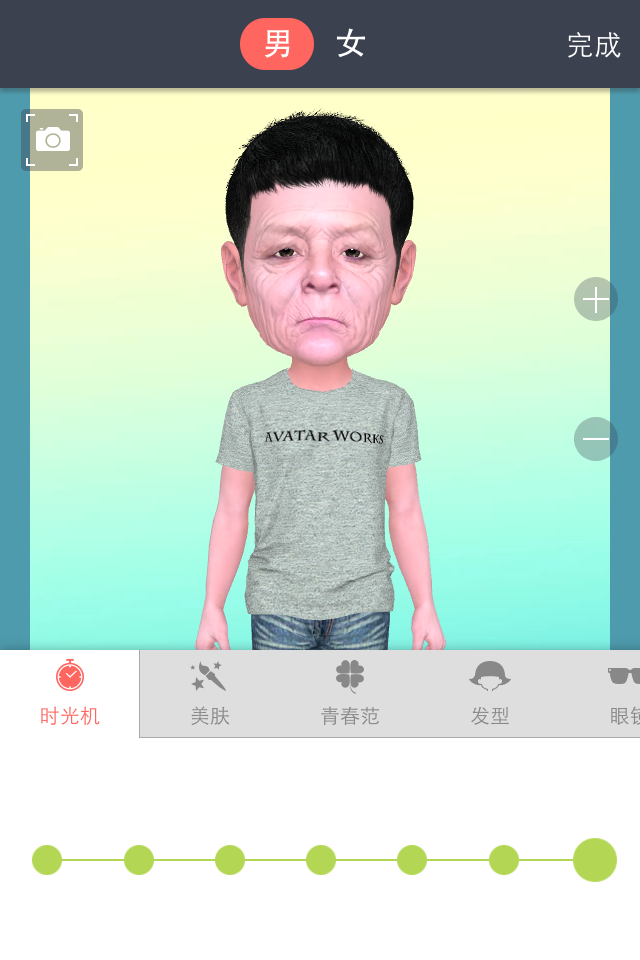 The magic wand is for skin color, and the rest are pretty self-explanatory. You can mess with your hair, eye color, facial hair, etc. I started with hair: 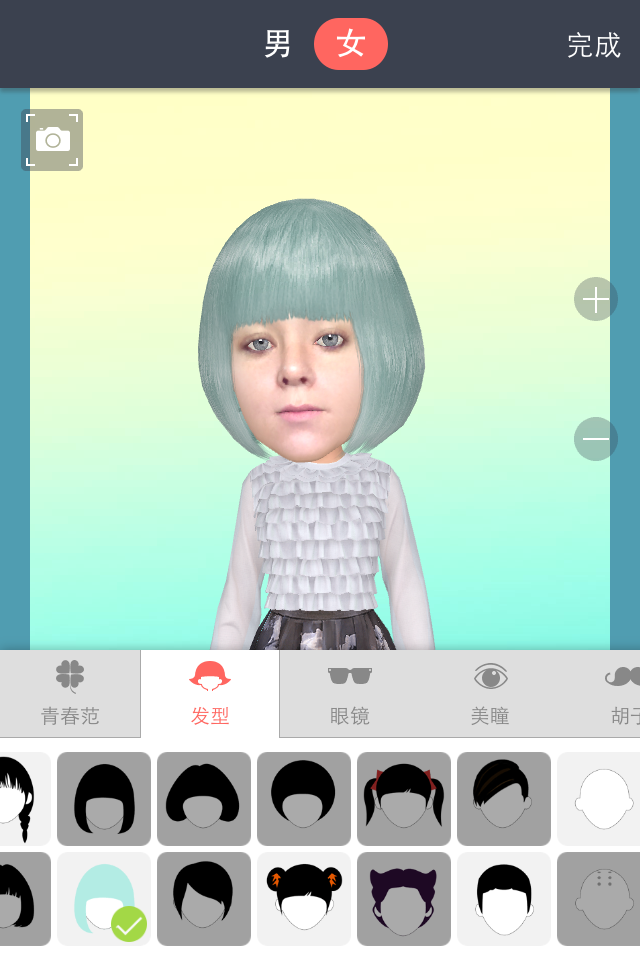 Utlimately I decided to give myself Elsa hair, because why not, but I think it turned a little more Julian Assange than Queen of Arendelle. No matter. Just a quick note here: If something is grayed out, it means it hasn’t been downloaded yet. You can tap it once to download, and then when it ungrays itself, you can use it. 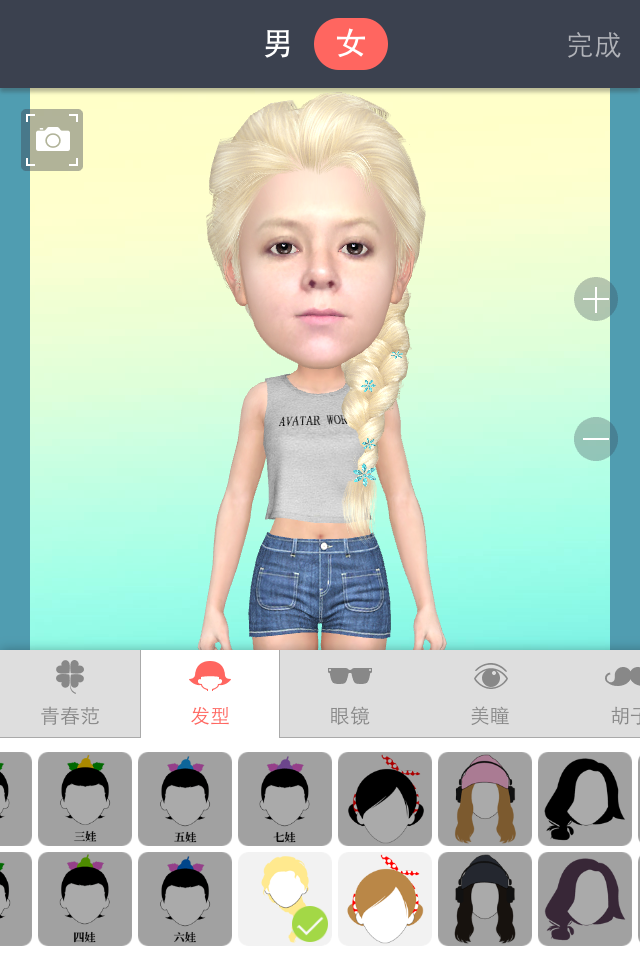 This is also when I figured out that you can switch the genders over. If you’re kind of slow on the uptake like me, you can always change it once you’re in the app by tapping the appropriate character up top.

So after that, you can play around with all the other buttons to mess with your clothes and accessories and stuff. There’s some pretty cute stuff on there, like this cat shirt I want in real life: 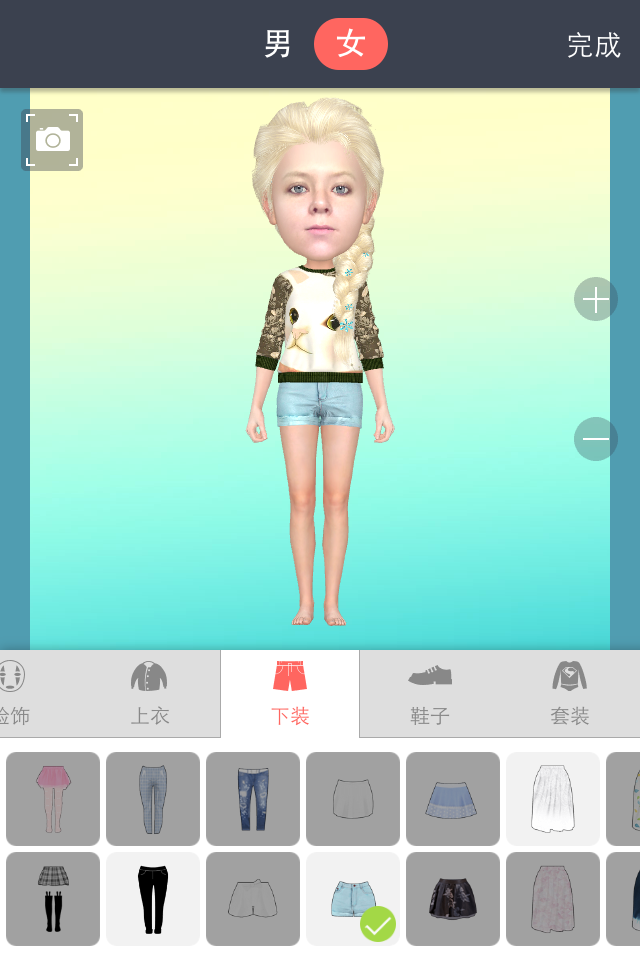 And this is literally the only time any incarnation of me would wear heels: 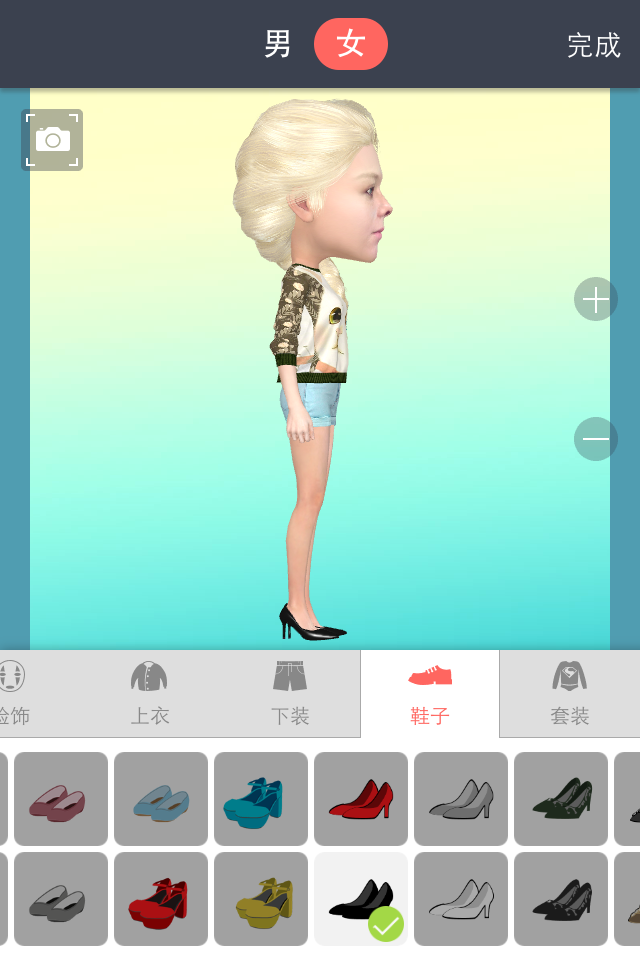 But I eventually found an outfit I was comfortable in: 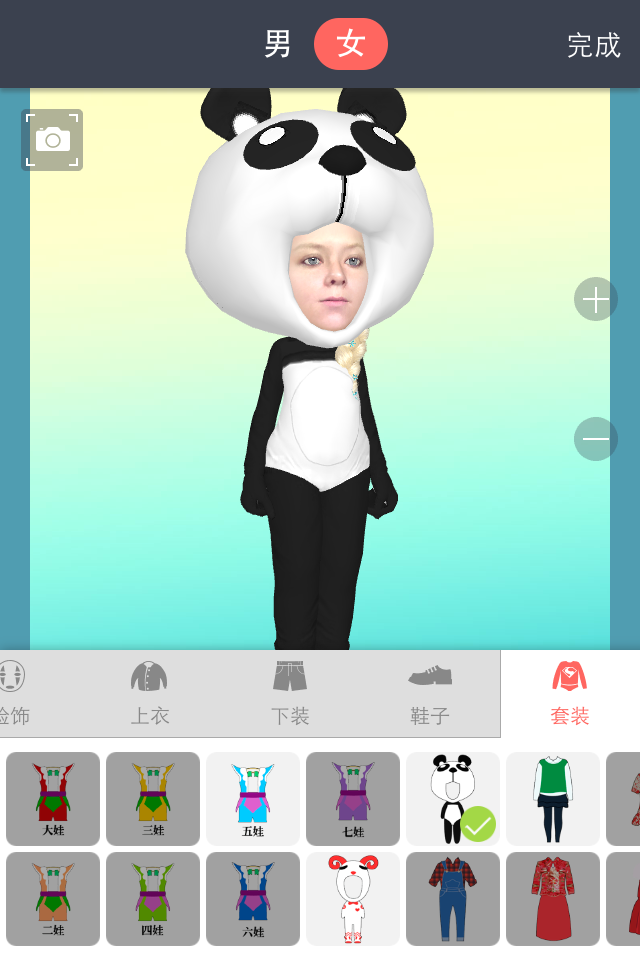 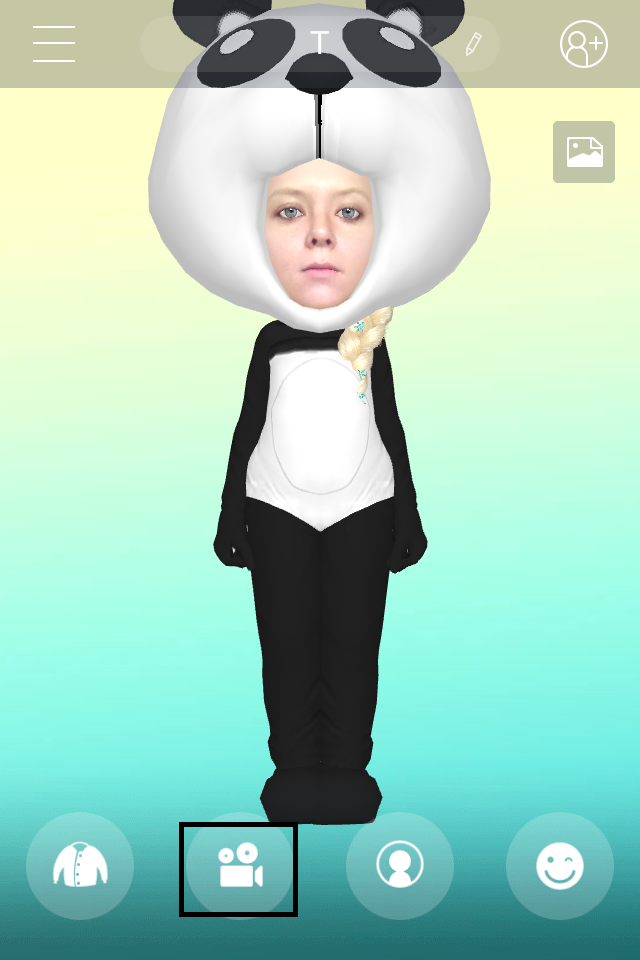 The second of the four buttons is that little movie camera. When you push it, it will bring you to a whole menu of little animations for your new Elsa panda or whatever. My personal favorite is SexyBack, but there’s a ton of options, including pole dancing and a motorcycle animation and a weird one where you can pop out of a box and throw pills around.

You can push the little photo icon up top in the right-hand corner to change the background: 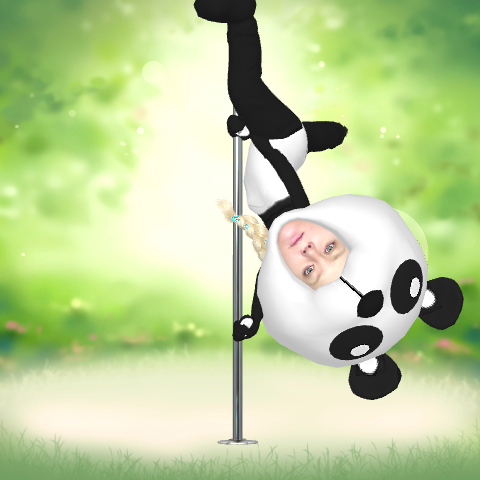 When you’re all done, you can press that green button at the bottom right to compile your video and save it to your phone so you can share it wherever you want to.

Sadly for me, my iPhone is about a billion years old, so the videos didn’t compile as smoothly as I would have liked, but that doesn’t mean you can’t enjoy some of the more hilarious ones out there.

6. Push all the buttons!

The last two buttons are this camera icon, which lets you just pose your avatar…

… and the smiley lets you make your own little GIFs, which you can’t really save unless you have the corresponding apps that let you share them. I get a little alert in Chinese when I try, which I assume means “none for you, sucka!”

You can also upload your own pictures from your camera roll if you don’t want to go the selfie route, which I recommend doing with pictures of Steve Buscemi or Nicolas Cage or your pet. So here’s my dog, Wheatley, here to give you nightmares with his adorable pigtails: 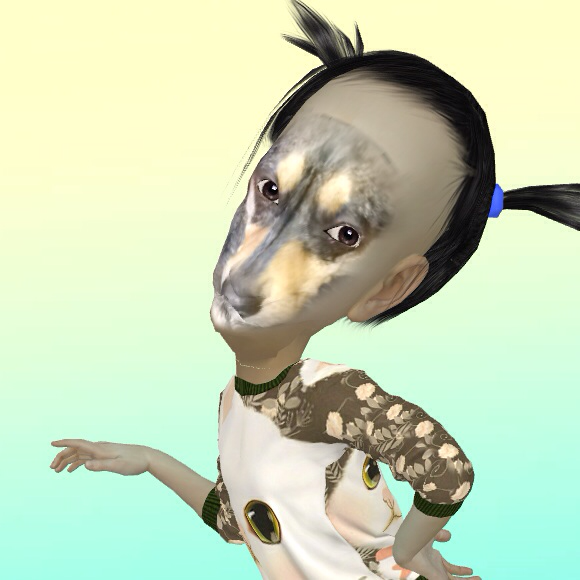 More apps to play with