The new Protein World poster campaign advertising diet supplements as a weight loss aid is a sexist, body-shaming double whammy. It screams “Are You Beach Body Ready?” while shoving a huge image of a woman in a bikini in our faces — just in case we’re not quite sure what the Protein World definition of a “beach body” is.

Granted she’s a beautiful woman in a bikini. But she’s only one version of beauty and sadly it’s the one that we see time and time again: in movies, on the pages of magazines and on enormous posters like this one plastered across the walls of our train stations, our bus shelters and our billboards. The one that doesn’t represent the vast majority of women. You know: the women who don’t have a tiny waist, a belly as flat as an ironing board and breasts that stay firm and pert in a bikini without any underwiring. You know: us.

It’s great to see companies like Dove, ModCloth and Lane Byrant use real bodies in their campaigns — and by real I mean all types of bodies, including the Protein World bikini girl but also shorter, skinnier, curvier, larger women than her — but we need more of it. And the only way to get more of it is to make our voices heard, perhaps in a very public way. Which is exactly what two bloggers, Fiona Longmuir a.k.a. The Escapologist’s Daughter and Tara of Zusterschap, did this week.

Tara tweeted a picture of herself showing exactly what she and her middle finger thought of the poster and this struck a chord with Fiona. The two began chatting, a plan was formed and 24 hours later they were both stripping to their bikinis in the middle of a crowded Charing Cross train station. 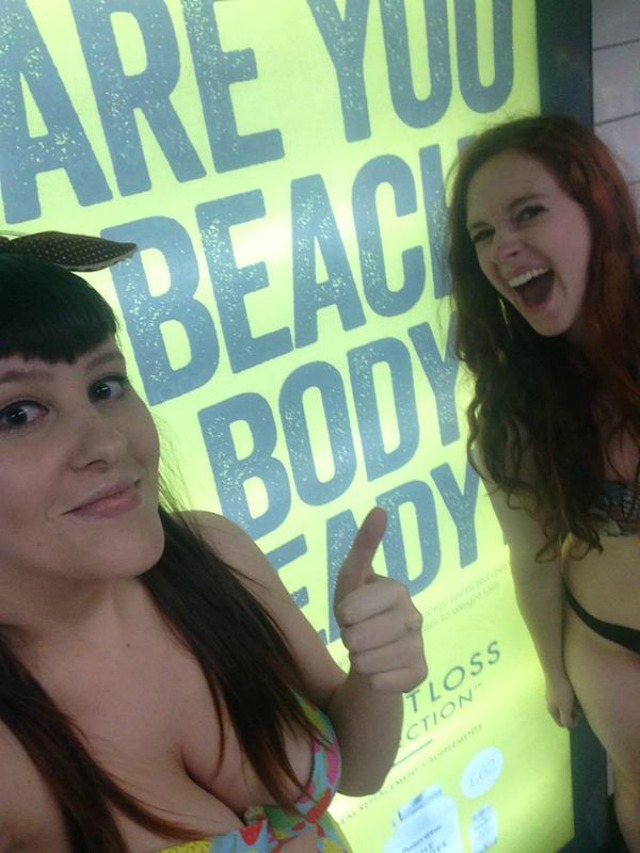 More: Men’s perception of beauty isn’t what you might think

“We agreed that we would pose in our bikinis next to the poster, just to let everyone know that we considered ourselves very much beach ready, and gorgeous to boot,” said Fiona. “I’ve had a lot of people compliment me on my confidence since posting this photo on Twitter, but to be honest, in those few seconds before I took off my dress, I felt like bursting into tears and having a heart attack simultaneously.”

Both women agreed that it helped to have someone else there for support (despite having only met each other the day before). “It was a very liberating experience for me as I’m not usually that comfortable on beaches in a bikini, let alone somewhere out of the ordinary in one,” said Tara.

“I don’t look like that model when I’m dolled up to the nines, never mind when I’m on the beach,” said Fiona. “But right there, in that moment, I felt sexy as hell.”

Tara agreed that it was “definitely a successful experience” saying, “I was really worried we would attract abuse or men making us feel uncomfortable but we didn’t. My faith in humanity has been restored a little.”

“The best part about all this is the fact that Protein World completely misunderstood, retweeted the photo and sent me a winky face emoji,” she added.

This particular campaign has annoyed a lot of people, prompting the #eachbodysready social media campaign and widespread vandalism of the posters around London Underground. A protest was held last weekend, a change.org petition calling for the removal of the ad has received 25,861 signatures to date and the advert is currently under Advertising Standards Authority (ASA) investigation due to the number of complaints received about it.

“Seeing images of the same (often unattainable) body type touted as the ideal all the time has an affect, whether we like it or not,” Fiona told SheKnows. “This idea that women need to meet a minimum standard to be acceptable for public misses the point that women aren’t supposed to be for public display. I think that’s what riled me so much about the Protein World ad. The model wasn’t presented as an unattainable goal, or an amazing achievement, she was presented as ‘ready.’ As the bare minimum that a woman should be.”

“Am I beach body ready? You can bet your ass I am,” she said. “And I don’t need meal replacements to get there. And neither do you. We’re already perfect.” 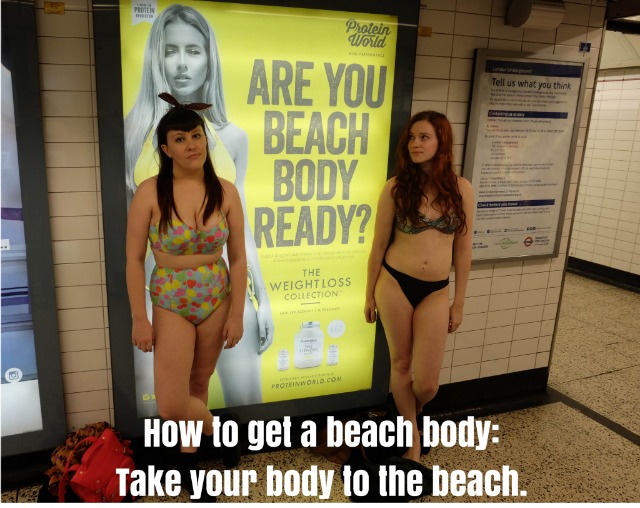 One woman speaks up on behalf of big, beautiful thighs
Plus-size blogger perfectly shuts down comments about bikini photo
Teach kids to love their bodies because the media isn’t (VIDEO)