Do pigs make good pets? Experts and pig owners offer their advice to help you weigh the pros and cons of adding a pig to the family.

“Pigs can make great family pets… as long as the family is expecting pigs to act like pigs and not dogs,” says Reid.

“We have found that pigs do best when they can live with at least one other pig,” cautions Reid. “Single pigs can often develop aggression issues.”

“Pigs can do well in the house as long as it isn’t their only living area,” says Reid. “They need access to the outside for most of the day. They need to have good shade, cool spaces and mud baths in the hot summer and warm housing and shelter in the winter. “

Potbellied pigs are the most common pigs living as pets in the U.S., but the farm hog occasionally makes a beloved pet as well,” says Reid. Kim Pezza’s potbellied pig was with her from the age of 6 weeks to when he died at age 13. Pezza also made a few of her farm pigs her pets as well.

“Pigs are super-smart characters with lots of personality and charm,” says Reid. “They are very clean and can do amazing things.” Brian Happie Foshée had a pet pig for 12 years and says, “Our pig could open the fridge, open the crisper, take out an apple and eat the entire thing! We’d find the fridge open with the empty drawer sticking out.”

“If not allowed to live as pigs — outdoors with pig companions and lots of room to root, exercise and play — they can become frustrated and destructive,” says Reid.

Emma Davidson, who described her pet pig as a “nightmare” and a “bully,” knows this all too well. The pig continually tormented and mounted the family’s Alaskan Malamute, and the kids were terrified of him. “He was clearly lonely for other pigs and would stick his head through the cat flap and squeal,” says Davidson. “Pig squeals are horrendous.”

“As with any animal or pet, it is up to the parents to supervise the interactions of younger kids and teach both the pigs and the little humans what is appropriate.” And your other pets may need some help adjusting, too. Kate Trimpey’s runt farm pig, pictured below, became best friends with the family’s Boxer! 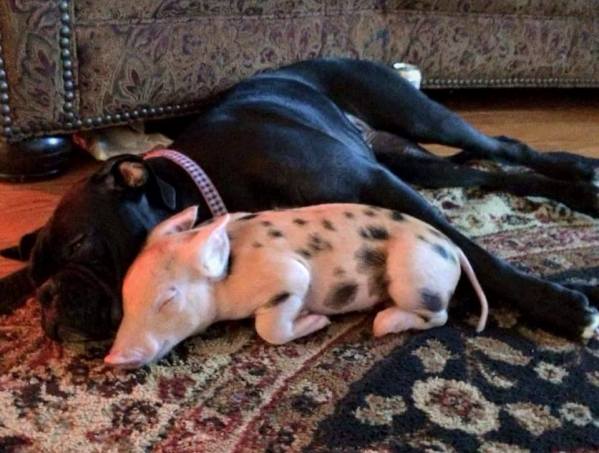 More on pigs as pets