Andres Yuhnke has had his rescue dog, Dharma, for 13 years. “She actually found me,” he told SheKnows. She was living as a stray in the San Tan mountains of Phoenix, Arizona, and jumped out from behind the bushes in Yuhnke’s yard, knocking him to the ground and covering him in kisses. She was anywhere from 2 to 5 years old at the time. “She’s very friendly… she loves other people, she loves other dogs.”

In December 2014, Andres found out that Dharma has an aggressive form of bone cancer. “It’s caused her right rear femur to fracture and is spreading to her lungs,” he shared. He and his family are trying to keep Dharma comfortable with the anti-inflammatory medicine and pain killers their veterinarian has prescribed. “She had been hopping along on three legs pretty fine… couldn’t keep her off the couch, couldn’t keep her out of the kitchen but in the last few days she’s lost mobility… her breathing is really labored.” They know that the inevitable time will come when Dharma’s condition worsens and she will need to be humanely euthanized. “As much as I’d like to keep her forever and ever, I know at this point she’s really suffering.”

Andres would prefer to do the euthanasia at home where his teenage daughters and even one of Dharma’s daughters, who also lives with their family, could be with her when she passes. “However, the in-home euthanasia I’ve found is currently outside my budget,” he said. The procedure is estimated to cost around $550 between the euthanasia, having to do the procedure on a weekend and having her body cremated.

That’s when Andres tried to set up a GoFundMe to ask friends, family and the greater internet to help him do what he felt was best for his beloved pet. He’d just finished his page and shared it across his social channels when he realized the link wasn’t working. He quickly received an email informing him that his campaign was being removed. 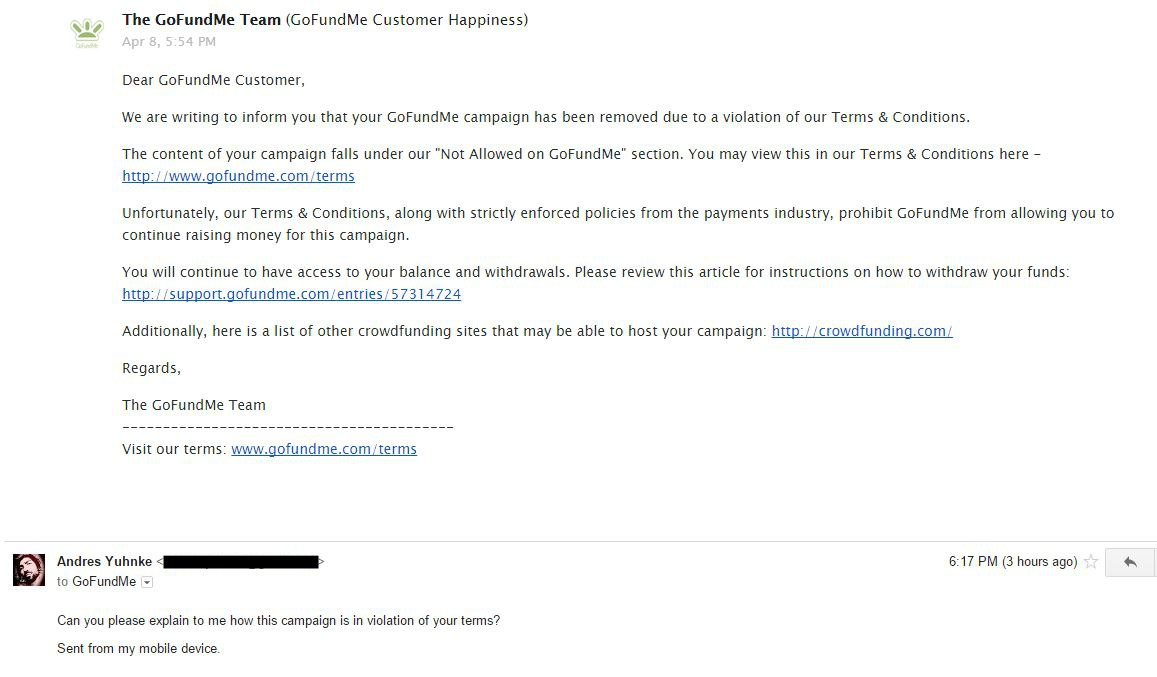 Apparently, GoFundMe’s Terms of Service currently do not allow campaigns for “ending the life of an animal.” Considering the company does allow fundraising for all kinds of vet bills and pet care campaigns, it’s surprising the company does not have the compassion to help a pet end its life in the most humane way possible. “I’m sure I’m not the only person who’s ever been in this position, so I would like to see them change their policy,” he said. “This isn’t something that’s illegal or wrong, this is a suffering animal that needs relief, and unfortunately euthanasia is her only real choice at this point.”

Andres has set up a PayPal account where people can donate whatever they can to help. And if he ends up receiving more than the costs to euthanize her, he will donate the profits to a local 501(c)3 non-profit animal organization.

Update: “Thanks in no small part to your sharing our story we were able to source the funds necessary. Dharma is no longer suffering and got to pass in the comfort of her own home, surrounded by her pack, myself, my girlfriend, my 3 teen aged daughters, my mother, Dharma’s daughter Babs as well as our 2 other dogs and our cat. Everyone got to say their goodbyes and understand that she was no longer with us. For her 12 year old daughter who has never been far from her, this was especially important. She needed to know that her mommy had passed on, not just that she left one day and never came home.”

Pit bull nurses abandoned kitten in this incredible rescue story (VIDEO)
Black dogs don’t get adopted and the reasons why are sad
Is tattooing your pet animal abuse?