Does it ever feel like lingerie isn’t made for you, but rather the models who model it? You are not alone. Sometimes I’ll go to the store, try on a bra that looks super hot online, but once it’s actually on my body, it just looks terrible. I end up feeling like there’s something wrong with me because I can’t pull off a bra that looks amazing on a five-foot-ten supermodel.

British designer Hayat Rachi knows just how we feel, so she came up with this amazing new lingerie line for real women that doesn’t require us to be sexy in it. Rachi (like many of us) had had enough of all the overly sexualized lingerie she kept seeing in stores and decided to make a bold move against it. She believes lingerie should be about self-expression and body positivity, not sexual objectification. Her brand, Neon Moon, allows women to just be in their underwear, rather than be what men or society want them to be.

She says on her Kickstarter page, “Neon Moon won’t place pressure on girls; instead, it will design and sell intimate garments that young women can comfortably, and confidently wear. It’s important for girls to not compare themselves to unachievable standards of ‘beauty’, but to succeed in their own way, and not purely out of the male gaze.”

Rachi put her life savings into creating this line of “nonconformist” lingerie, as she calls it. She also received significant funding through her Kickstarter campaign — she’s already $3,000 past her goal, largely in part to Zooey Deschanel’s support of Neon Moon on her Facebook page. The New Girl creator and star loves supporting girl power, and this is that times a thousand.

Besides Zooey, she’s received significant support and encouragement from feminists (men, women and transgendered) everywhere. Her goal, to show the subjectivity of beauty, is obviously a universal one. Check out some more of the shots from the line’s first photo shoot and you’ll see what I mean. 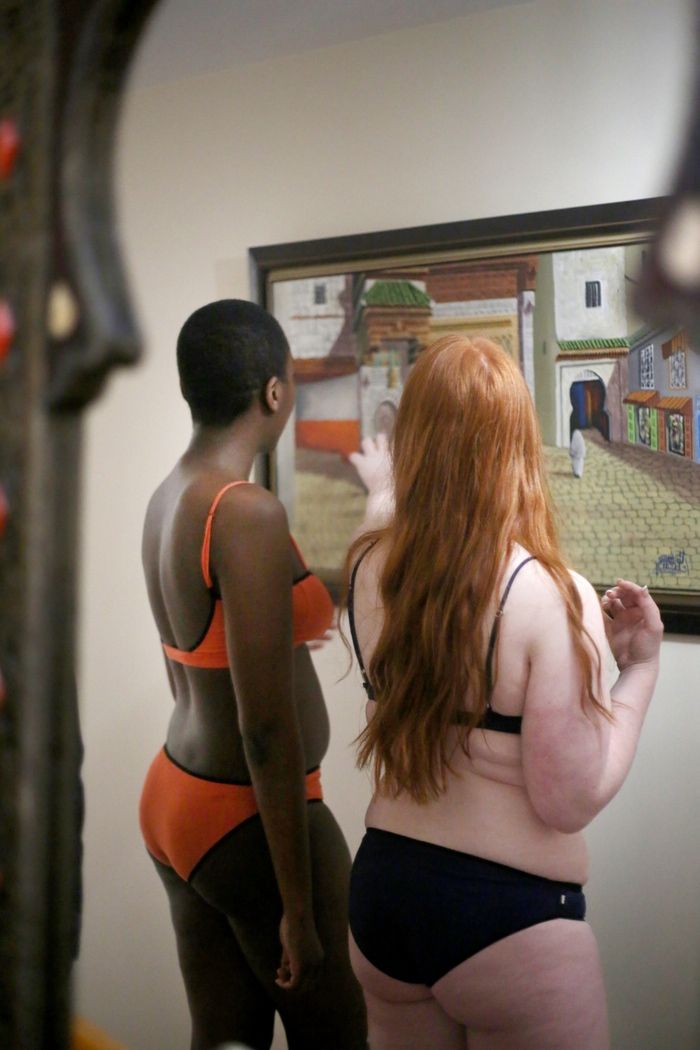 The lingerie has no padding or underwire, but instead is made of a simple bamboo material designed to fit your body, not the other way around. Also, you’ll notice her models have been left untouched by Photoshop and don’t assume sexy poses, but rather just appear to be hanging out, like we sometimes do in our underwear. The first collection is called Mon Dieu, and comes in four styles: Coucou, Bof, Tac-Tac and Non. While basic and comfortable, each style is super cute and colorful. Remember, just because it’s feminist doesn’t mean it can’t be fun and cool.

Pricing is yet to be determined but Rachi intends to keep it extremely affordable because she truly wants all women to be able to wear it. As of now, sizing is small, medium and large, but she plans to extend that once production is in full swing. If you want to buy a bra or “knickers” now, you can do so by donating on Kickstarter. You’ll receive your body positive lingerie by October 2015.

If you want to embrace yourself, including all your “imperfections,” give this line a try. Let’s put a stop to lingerie being all about society’s standards by redefining those standards to fit us. As Rachi says so eloquently in her campaign video, “there’s a very narrow standard of beauty in today’s society and Neon Moon is set on changing the lingerie industry for the better.”

Plus-size women to Victoria’s Secret: We’re here too!
Real men talk about your underwear and lingerie
Lingerie for any day