Don’t you just love the feeling when you’ve splurged out on something you’ve been wanting for ages — the latest iPhone or a pair of killer heels? But according Dr. Thomas Gilovich, a Cornell University psychology professor, studies undertaken have proven you’re better off spending your money on life experiences.

While Dr. Gilovich believes retail therapy can soothe the savage shopping beast within, the buzz only lasts for a short time. He suggests you are better off spending your hard-earned dollars on a once-in-a-lifetime type of experience, like seeing your favourite band live or an exotic holiday.

So we thought we’d take a look at the 50 coolest life experiences you can do to top up your happiness meter.

1. Swim with the whales in Tonga

Encounter the incredible humpback whales in the crystal-clear waters of the South Pacific. Tours take place each year between July and October. (whaleswim.com, $1,500) 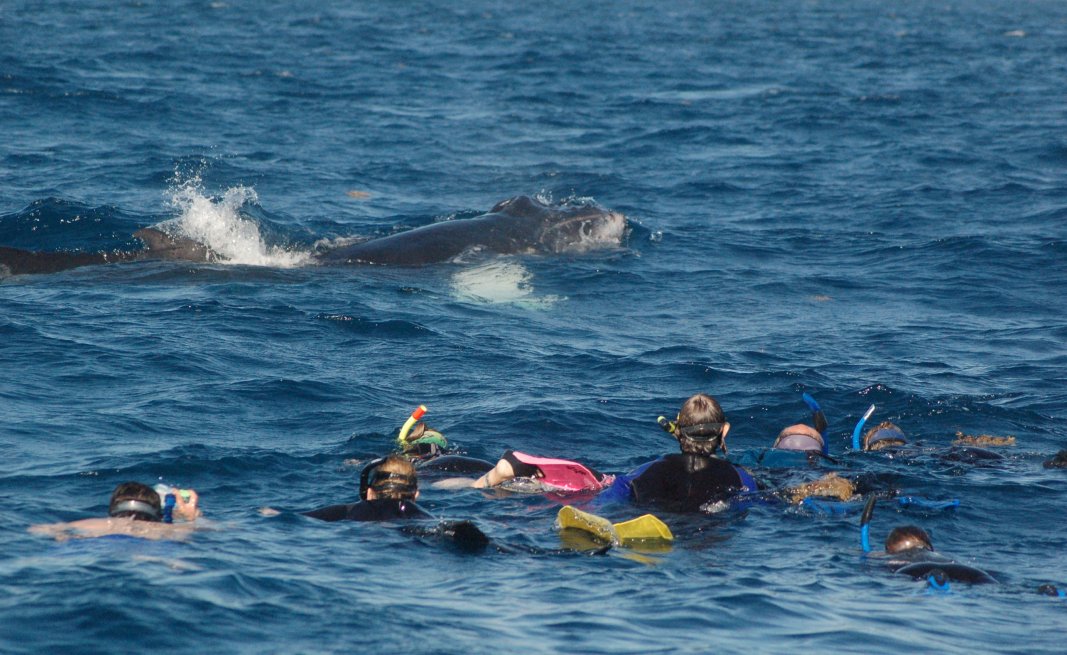 Experience Surfers Paradise like never before by kayaking to the second largest sand island in the world and interacting with dolphins. (Australian Kayaking Adventures, $85)

3. Swim with the whale sharks

Coral Bay on the Ningaloo Reef in Western Australia is one of the only places in the world where you can swim with whale sharks. The limited tour season runs from March to July. (Coral Bay Ecotours, $395)

Face off against some of Australia’s largest saltwater crocs and survive to tell the tale next time you’re in Darwin. (Red Balloon, $160) 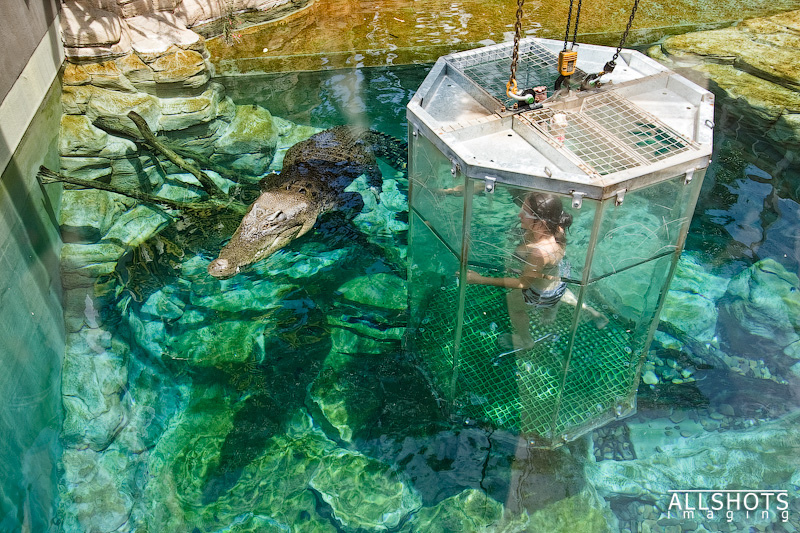 6. Get up close and personal with penguins

Sea World’s penguin experience is the closest you can get to an Antarctic adventure without leaving Australia. (Sea World, $115)

7. Bathe with elephants in Phuket

Taking a bath will never be as exhilarating as this once-in-a-lifetime experience. Frolic with the elephants in the water after a trek through the Thailand jungle. (Khao Lak Explorer, $61) 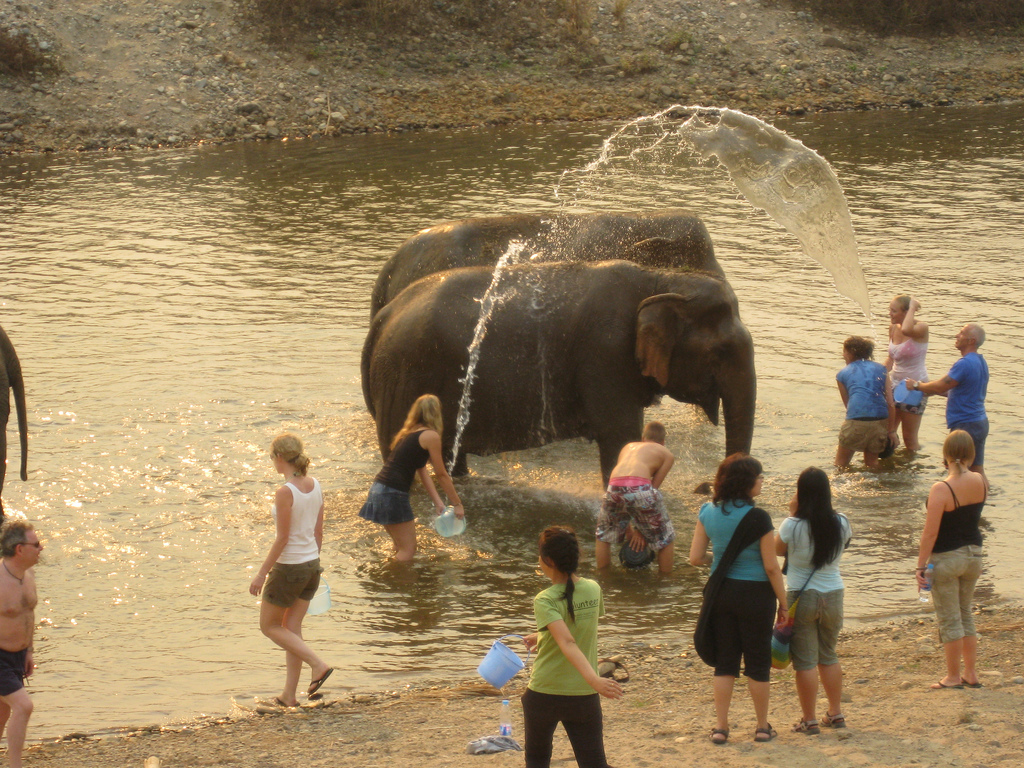 8. Try your hand at piranha fishing

As part of a tour into the depths of the Amazon, you can fish for flesh-eating piranhas from a dug-out canoe. (gadventures.com, $1,600) 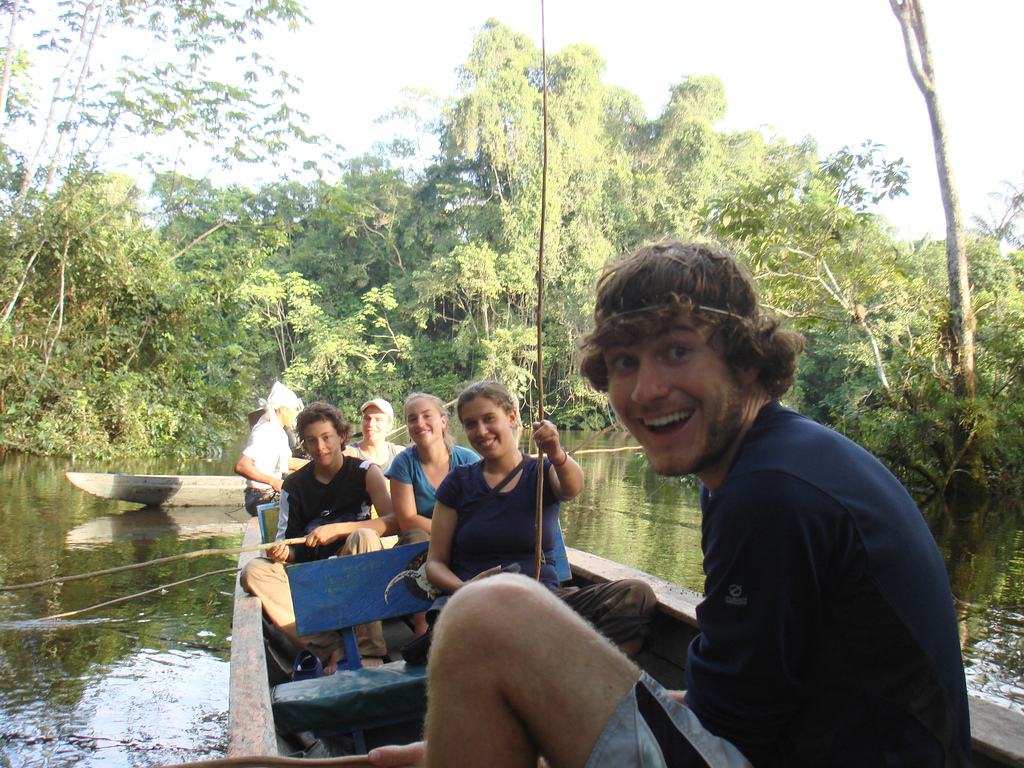 Visit the Chengdu Panda Breeding Center or the Dujiangyan Giant Panda Center in China and experience the pure joy snuggling a baby panda brings. You’ll even get photos to capture the moment. (Viator, $68)

10. Have dinner where monkeys are your waiters

Kayabukiya Tavern is a traditional sake house in Japan, but it’s worth the money just to be served by real monkeys. The monkeys only work two hours a day and only after 7 p.m. (Kayabukiya Tavern, prices vary)

This is the closest you’ll ever get to real live grizzly bears in the Canadian wilderness without disturbing their natural habitat. (Go Wild, $330)

12. Volunteer to work with orangutans

Immerse yourself for 12 to 27 days in the heart of the Borneo jungle to help rehabilitate orangutans. (The Great Projects, $2,315)

13. Snorkel at the Great Barrier Reef

Some of the most spectacular snorkelling in the world is right on our back doorstep. Get your goggles on because you’ll be talking about this life experience for years to come. (Viator, $149) 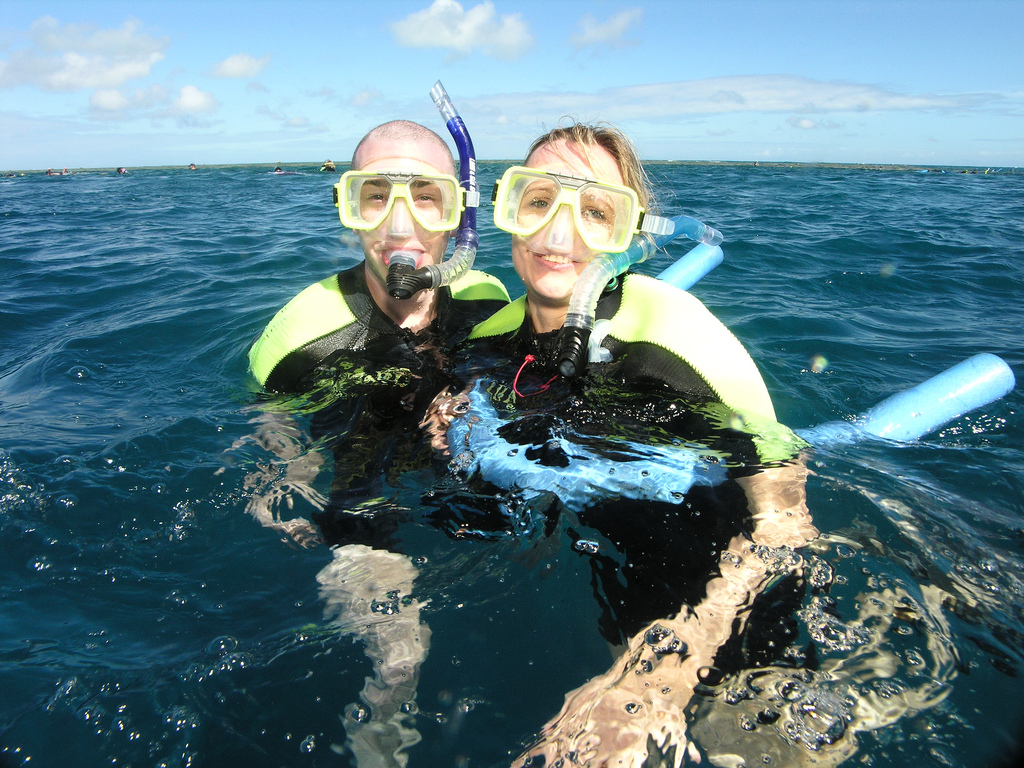 Be one of the first in Australia to try out the latest extreme sport, which involves being jetted five metres out of the water. (Red Balloon, $165)

With some of the best surf beaches in the world, Australia is as good a place as any to wax up your board and try and catch a few waves.

Hop aboard your own private sailboat, complete with your own crew, and experience the Gold Coast from the water while enjoying a gourmet lunch. (Viator, $73)

Soak away your worries in 6 million litres of geothermal seawater, one of the 25 natural wonders of the world. Upgrade your experience to a luxury package that includes a beauty treatment, spa products and exclusive lounge use. (Blue Lagoon, $165) 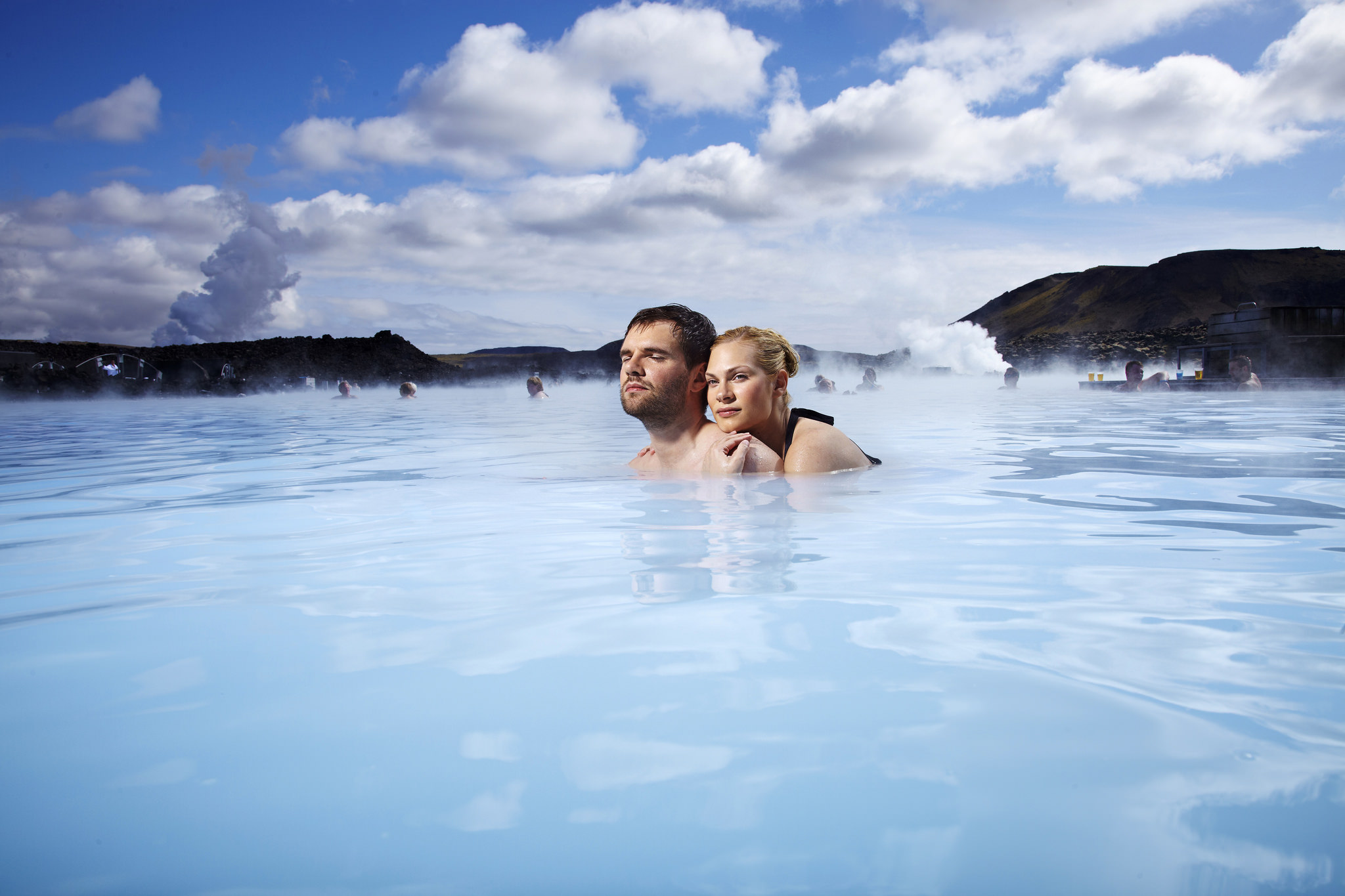 Witness the twinkling lights of Sydney from the highest vantage point after conquering your fear of heights and climbing the Sydney Harbour Bridge. (Bridge Climb, $230) 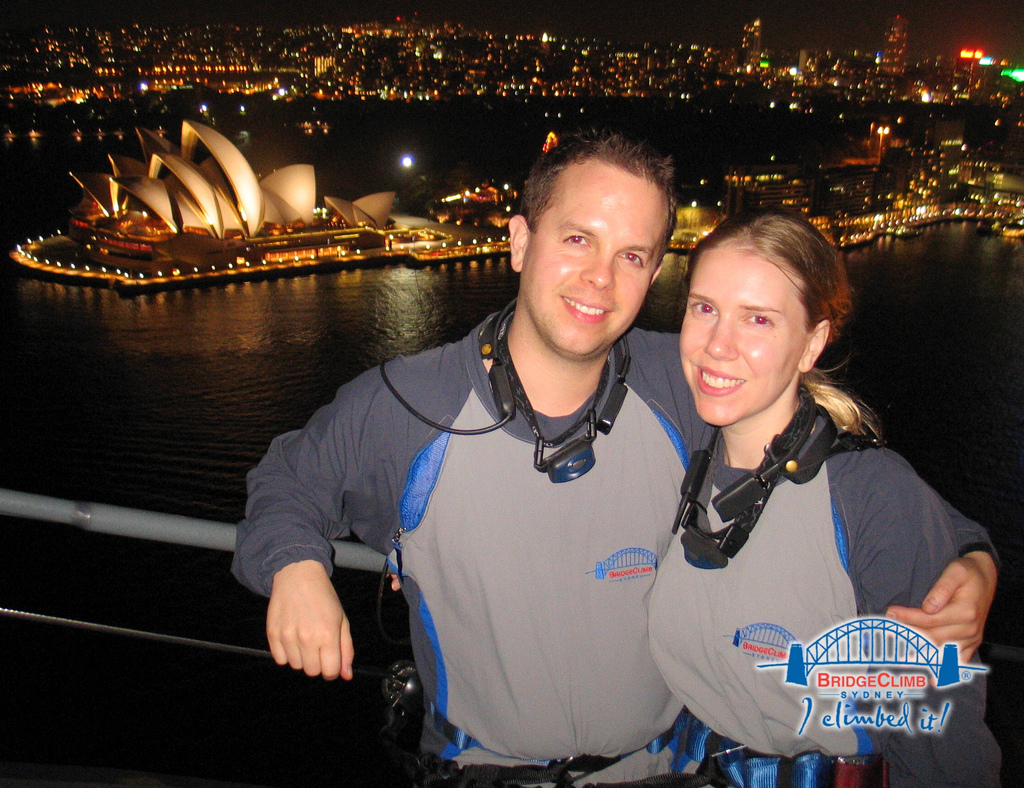 If ordinary skiing down the snowy slopes no longer gets your heart racing, take your skiing experience to the next level with heliskiing in Queenstown, New Zealand. (Alpine Heliski, $385)

Soar through the air with the greatest of ease and learn to swing, flip, twist and turn like the professionals. (Sydney Trapeze School, $165)

The world’s ultimate thrill ride resides on the top of the Stratosphere in Las Vegas. If the rides at Dreamworld no longer cut the mustard, try this one on for size.

Repel, abseil and zip line over 300 metres down a steep set of waterfalls in the picturesque heart of the Coromandel, New Zealand. (CanyoNZ, $360) 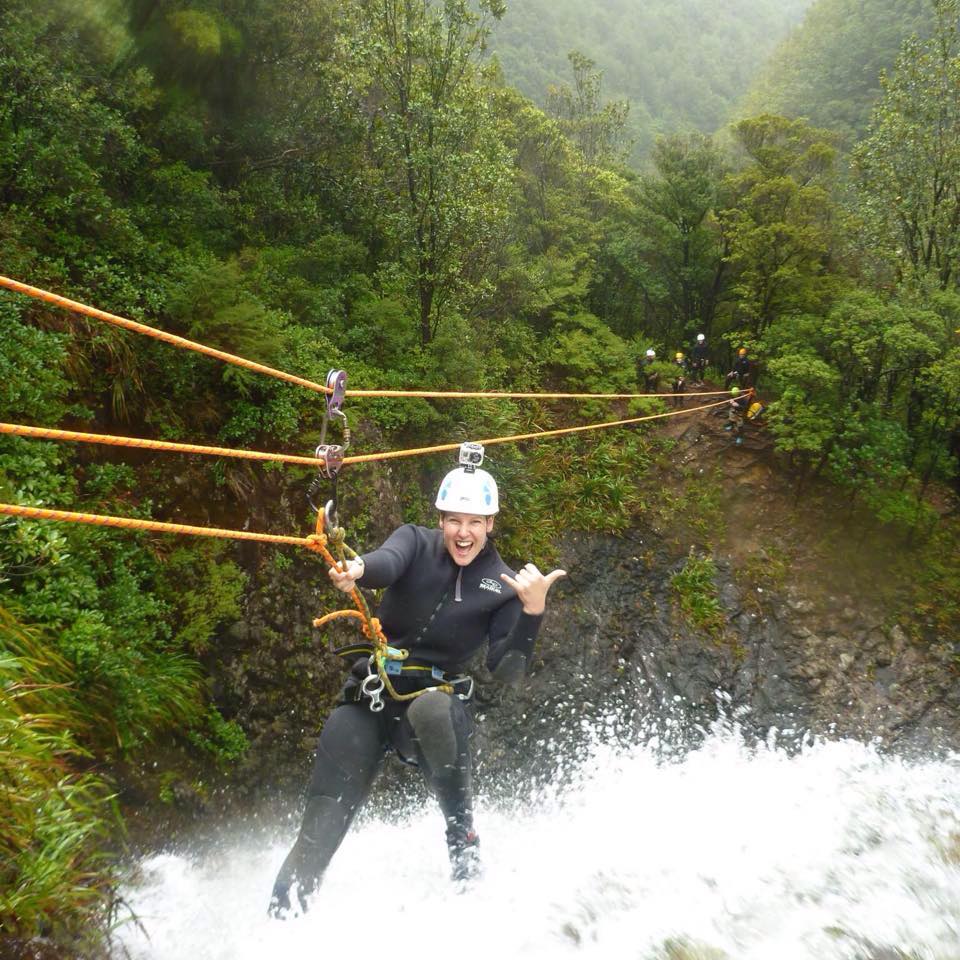 Sliding down sand dunes at up to 80 kilometres per hour face-first (if you are brave enough) at Moreton Island will give you a buzz that lets you know you’re alive. (visitmoretonisland.com, prices vary)

Hurtle down a hill in a big plastic ball with a group of friends. What could possibly be more fun? (giftsthatthrillandspill.com.au, $100) 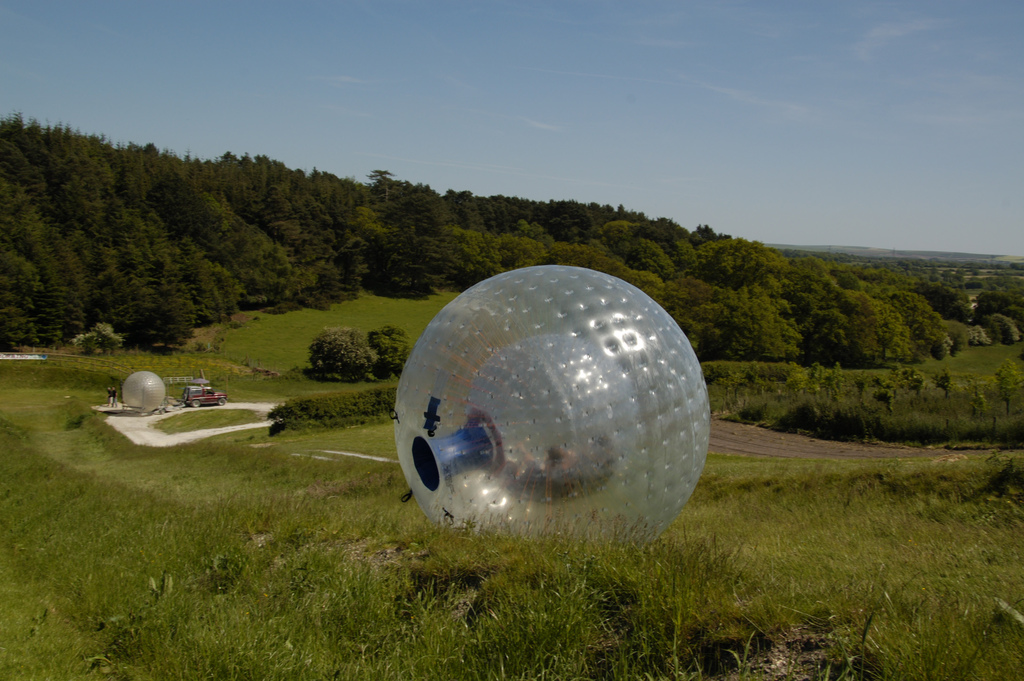 26. Learn to fly a helicopter

To get your private licence, it will cost around $27,000, but you can try it out to see if it’s something you’d like to pursue by having a trial lesson. (adrenalin.com.au, $340)

Get a taste of what it’s like to be part of the Fast and Furious team by getting behind the wheel of a super car. (Red Balloon, $299)

This is not a hike for the fainthearted and it is physically demanding. Fuego is a fired-up and angry volcano in Guatemala, but your happy meter will be full when you’ve survived it. (OX Expeditions, $85)

29. Eat at a Gordon Ramsay restaurant

While you may not get the experience of being screamed at, you can at least sample the menus the world-renowned chef has put together. There are over 30 restaurants around the world.

30. Indulge with a Golden Opulence Sundae

While in New York, make sure you make the time to call in to Serendipity 3 for dessert. Their Golden Opulence Sundae is world-renowned and, at US$1,000, you’ll be making history among your friends by just trying it.

What better excuse to dress up and have a girls’ afternoon with dainty sandwiches, cute cakes and champagne? If you’re the next Jamie Oliver in the kitchen, whip up scones and sangas yourself, otherwise most of the flash hotels in your local city host them.

Experience the hustle and bustle of Las Vegas as you explore all the biggest casinos and the crazy sights you won’t get to see anywhere else in the world. Aside from your airfares and accommodation, this experience is free. 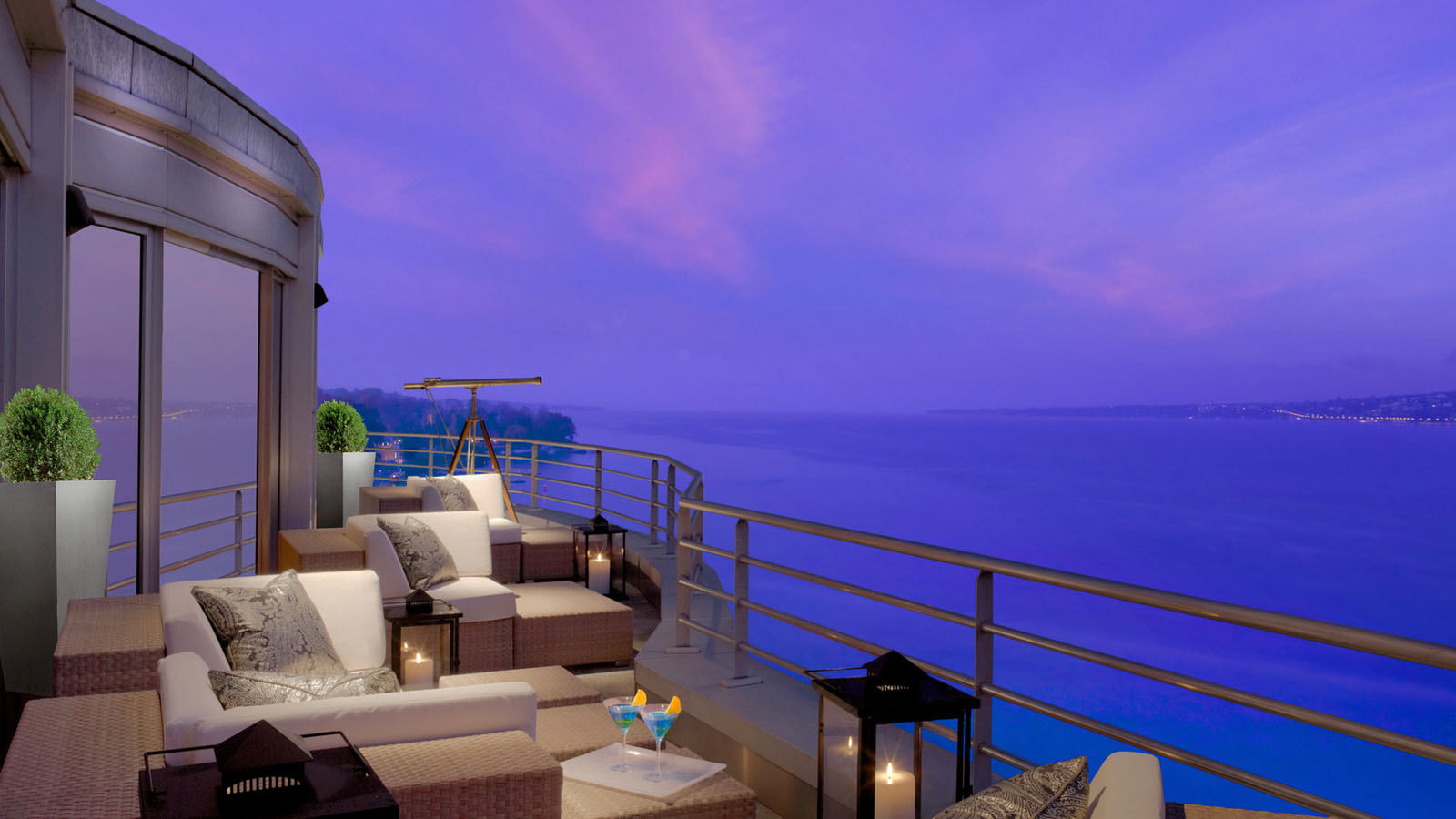 36. Hire your favourite band to entertain at your birthday

You may have to do some research and track down the band’s management, but you can usually hire homegrown talent and the less popular bands for around $30,000 and up.

A 15-day guided tour from Chicago to Los Angeles along the iconic Route 66 on a Harley will be a memory you’ll treasure forever. (ridefree.com, $6,900)

38. Volunteer at an orphanage

Giving back and helping people less fortunate than yourself can be one of the most rewarding experiences you can buy. Whether it’s just a week or a couple of months, you’ll be glad you signed up for this challenge. (Project Abroad, $2,500+)

39. March with the red crabs

Head to Christmas Island to witness the migration of the red crabs during breeding season, which is usually during October/November for up to 18 days.

Experience hot laps with a professional driver and get a chance to get behind the wheel. (Red Balloon, $449)

41. Take a horse safari through the snowy mountains

Explore from Darwin to Sydney in a 26-day guided tour. The price includes meals. (Contiki, $4,781)

This annual event takes place every year in Copenhagen during July and has to be seen to be believed, with hundreds of Santa Clauses all in the same place at the same time.

Get jiggy with it with your partner in an infamous Japanese love hotel. There’s usually plenty of tacky decor, ceiling mirrors and rotating beds.

Forget the Gold Coast, head to the U.S. and take on some of the world’s biggest roller coasters at theme parks across the country.

46. Be part of a live studio audience

Whether it’s the live filming of The Voice or The Footy Show, there’s nothing quite like being part of a studio audience.

In 2016, the Big Nude Boat cruise leaves from Fort Lauderdale. If you have up to four people in your cabin, it’s cheaper. (Bare necessities tours, $699+)

Lord of the Rings fans will enjoy heading across the ditch to Matamata, New Zealand, for a true Middle-earth experience. (Hobbiton, $75) 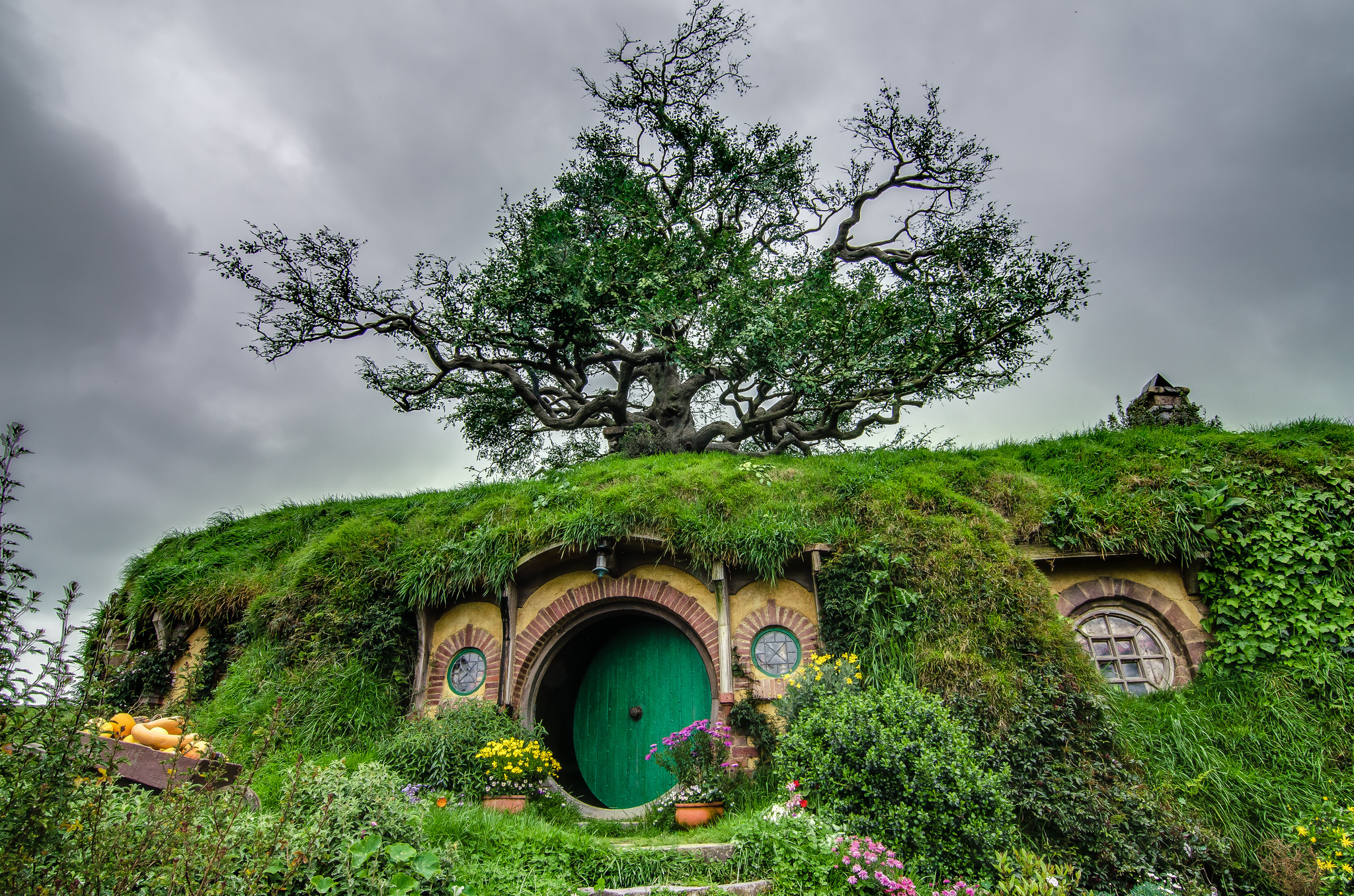 Have a traditional meal with a monk who used to be a New York investment banker and hear about his spiritual journey. (Sidetour, $50)

Travel to Norway and see the breathtaking natural display that lights up the night skies, usually between September and March.

Quiz: How well do you really know Disney World?
The Batcave and other themed hotels that will bring out your inner child
10 British cities cheaper and cooler than London