Social media is the one place we can have total control of the image we put out into the world. There’s no way I’m going to post a picture of myself looking like I just got out of bed when I can post images of myself looking my best.

We carefully construct our personalities and make sure the best versions of ourselves are always on show. Isn’t that how social media goes? If people from high school track you down, you at least want to look like you’ve got your shit together, right?

Well, it seems a new tool called Analyze Words could spell the end of the social media personality farce by providing a revealing look into our real personalities by psychoanalysing our tweets.

The website allows anyone to pop in a Twitter handle and, based on specific word use in a tweet, the interactive tool claims to be able to determine your real personality by looking at how you use words and language.

The tool was created by James Pennebaker, a psychologist at the University of Texas, who studies the relationship between language and personality, so there’s bound to be an element of truth to what he’s doing.

The tool uses your very own language and use of words to determine things like your mood, thinking style and personality traits.

We’ve taken a look at 10 of Australia’s high-profile personalities to see how they stack up. 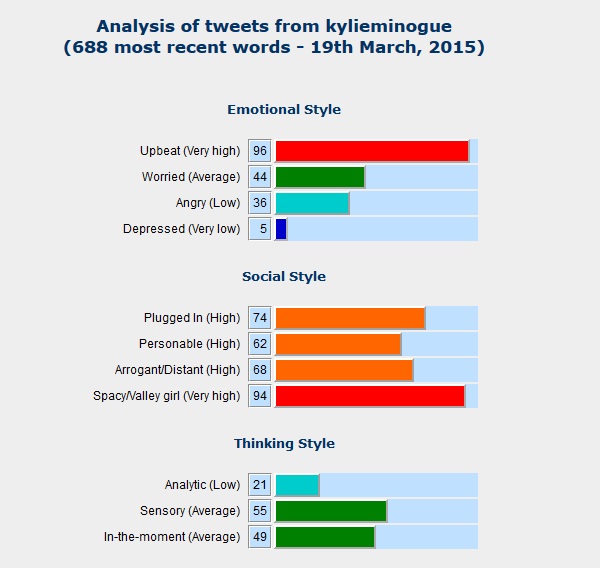 Kylie Minogue’s positive emotional style is off the charts (with 96 points); she’s incredibly upbeat and personable, but a bit arrogant, too. 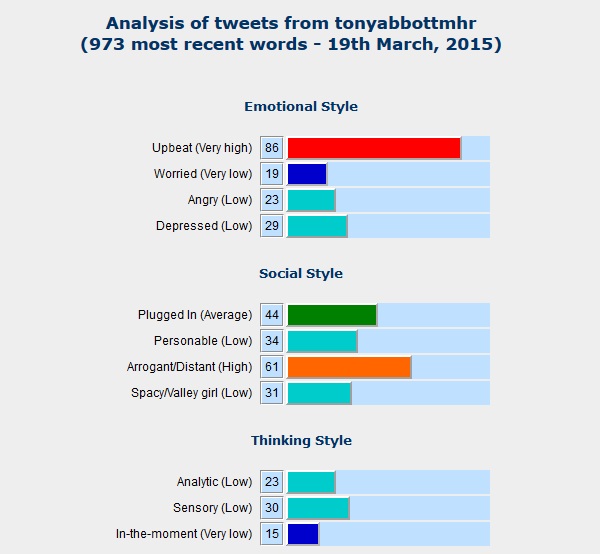 The prime minister of Australia is also upbeat (with 86 points), but is also arrogant and distant and not too analytical. 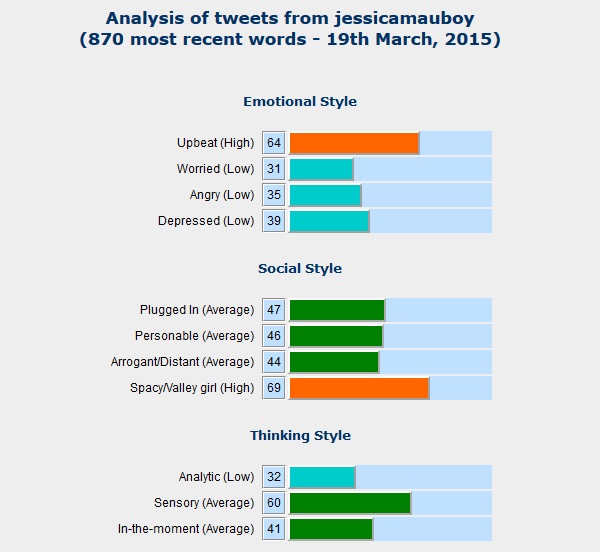 Good old Jessica Mauboy is upbeat, too, as you’d expect (with 64 points) and she’s a bit spacey and doesn’t shy away from expressing her feelings. 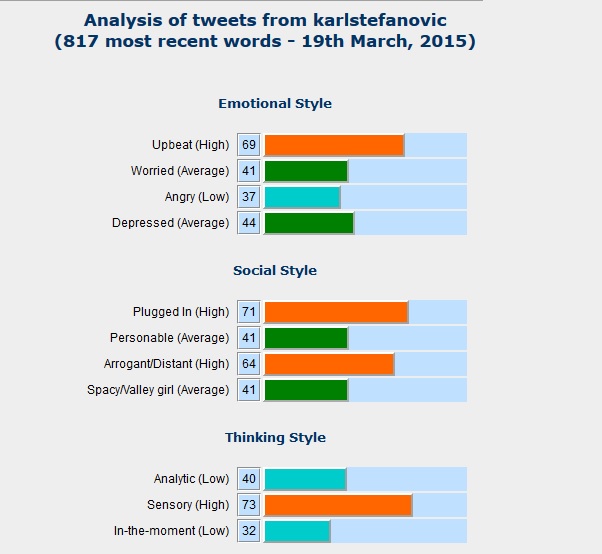 Karl Stefanovic is also someone who doesn’t shy away from expressing his feelings, with a high sensory thinking style. 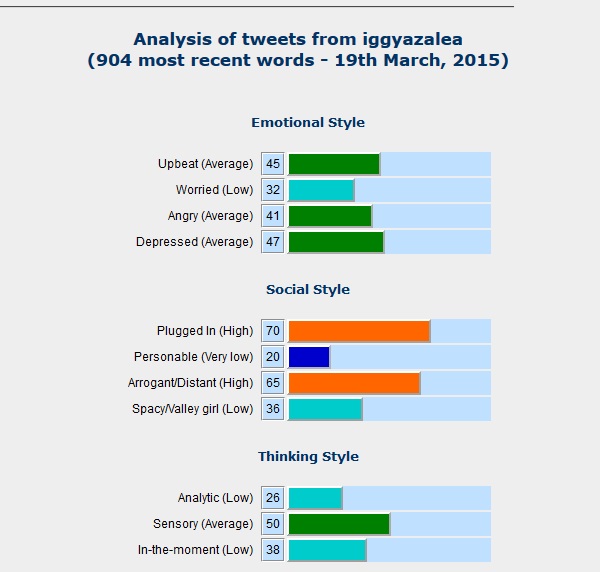 Iggy Azalea’s emotional style is pretty average across the board. But she’s very plugged in, which means she regularly engages others in her tweets. 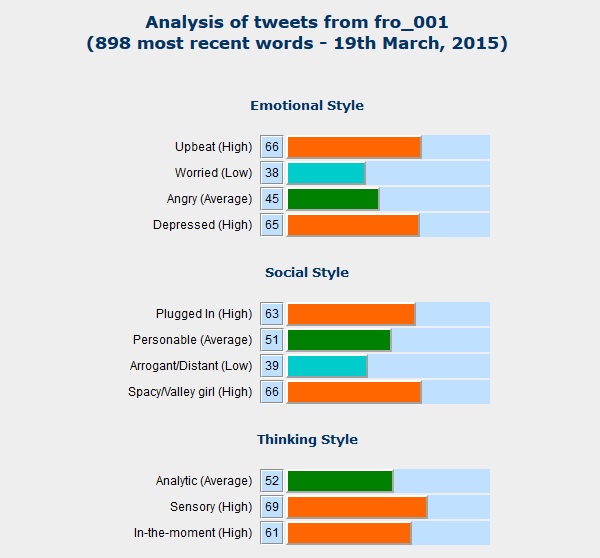 It looks like Samantha Frost is both upbeat and depressed, which is expected given the highs and lows she experienced last year. 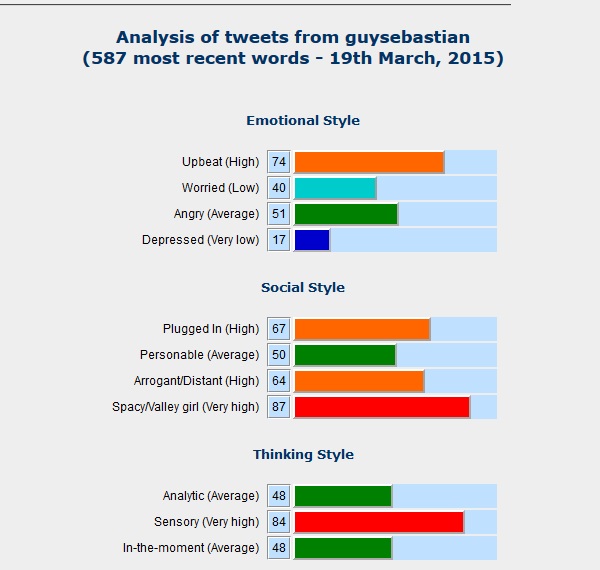 Guy Sebastian prefers to talk about what he does rather than how he feels, scoring particularly high in the arrogant/distant social style. 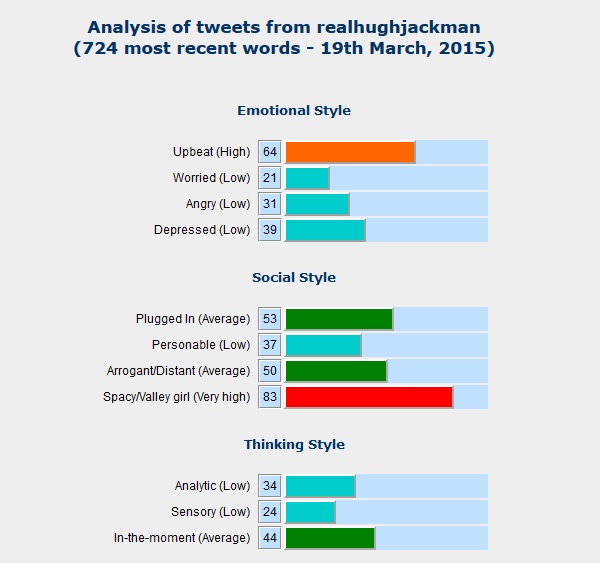 Hugh Jackman is a storyteller and loves to tweet a good LOL or emoticon, scoring high in the spacey/Valley girl social style. 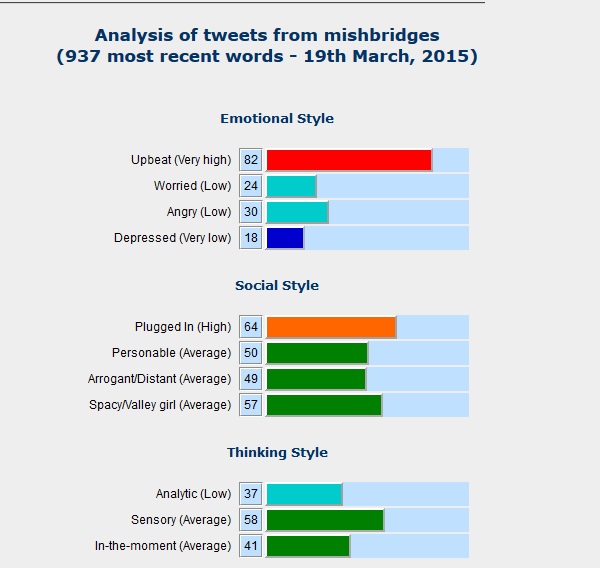 Michelle Bridges loves to share the love with shout-outs, scoring high in the plugged-in social style. But she doesn’t use complex thinking styles. 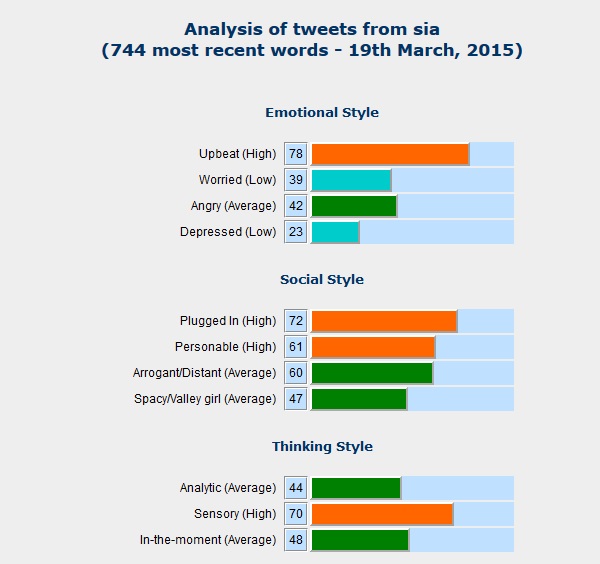 Sia is upbeat and asks questions about other people’s well-being, scoring high in the personable social style.