Our hats are off to the brilliant person who not only bothered to type out and print a passive-aggressive note, but had it laminated to make sure it withstood harsh winter weather long enough for the owner of the vehicle to take notice. That’s dedication.

Stacy Morrison, a media executive and author, pulled into the parking lot at the Metro-North train station in Garrison, New York, and began the painful process of trying to find a permit parking spot. “Due to the never-ending snowstorms, many spots are taken with a massive snow pile; others are iced over or have frozen ridges of snow, making them unusable,” says Morrison. She finally found a very tight spot next to a snowed-in car. It had been a week since the last storm, so the car had been there at least that long.

“The problem with socialism is eventually you run out of other people’s money.”

When she got out of her car, she saw a laminated note on the back window: 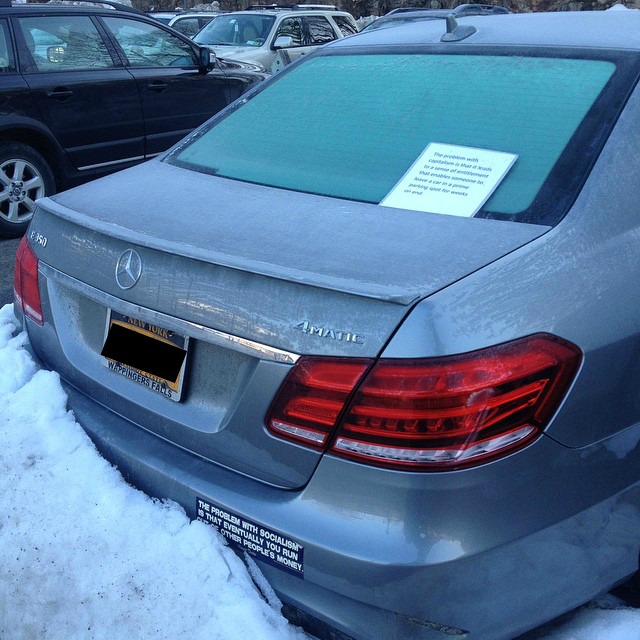 “The problem with capitalism is it leads to entitlement, such as leaving your car in a prime parking spot for weeks on end.”

Morrison says the exchange — evidently as yet unknown to the owner of the car — captures the political tone in Garrison perfectly. As for the lamination, clearly intended to make sure the note outlasted the next winter storm? “That’s taking parking lot passive-aggression to a gold-medal level,” Morrison says. “So I snapped a photo, to share the love.”

Let this note be an inspiration to all of us. Don’t just scrawl out your angry responses to people who park like jerks. Type out a classy note and make sure it’ll stand up to the elements.

13 Reasons we wish life was like a musical
6 Gorgeous ways to make your collectibles look organized
QUIZ: How badly do your coworkers hate you?