The selfie stick has gone from a novelty gadget to a banned product, with event organisers and even countries banning it altogether.

One Direction fans may have been hoping to get the perfect shot of Niall, Harry and the boys with the selfie stick, but now that’s just not going to happen as audience members have been banned from bringing the stick into stadiums and venues around the country.

Along with pepper spray, alcohol and fireworks, selfie sticks have joined the list of banned items that weren’t allowed to be brought into the arena during the One Direction concert at Suncorp Stadium on Wednesday.

Not only does the stick raise health and safety concerns, no-one wants a selfie stick to the eye. But if hundreds of people attempt to use the stick to photograph and film the show, imagine what kind of visual obstruction that is going to cause — although, parents and chaperones probably wouldn’t mind that too much, but there would still be the issue of the sound that they might also want to obstruct.

“They are a restricted item for all concerts due to safety concerns and potential sight impacts for many patrons,” Stadiums QLD spokesman, Mark Brown, said.

“During sporting events, we would encourage patrons to show some common courtesy to people seated around them by not blocking their view when games are being played.”

Surely stadiums hosting One Direction aren’t the first to ban these selfie-enabling gadgets? Here’s who and where else have banned the selfie stick. 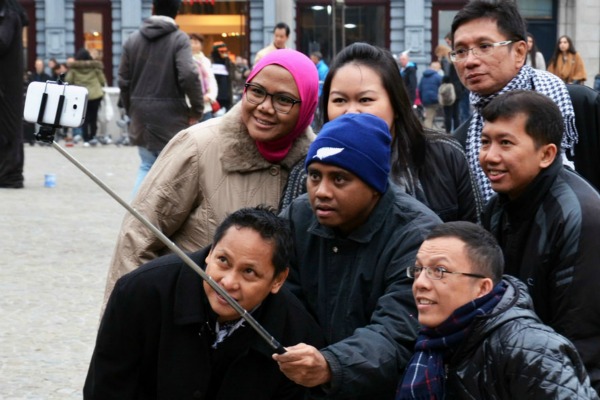 Australia’s Future Music Festival has also asked music lovers to leave their selfie sticks at home. “Future will not be allowing selfie sticks at the Festival. They still encourage punters to take selfies… but just with their arms,” the festival organisers said in a statement.

The South Korean government has banned selfie sticks and telescopic poles and monopods, with anyone found selling them facing three years in prison and a $30,000 fine. The government have declared them “communication equipment” which must be certified and tested before sold or used.

London venues are also cracking down on the use of selfie sticks at their concerts and events, because of fears that concert-goes could become injured or block the view of the show. Ticket holders are refused entry at Wembley Arena, the O2 Arena and Brixton Academy if they have the selfie stick on them.

Even the Australian Open is sticking it to their spectators, saying the selfie stick is banned from tournaments because they are a distraction to both players and spectators. They haven’t banned selfies altogether, though, and have created specific selfie zones for those who can’t help but take a selfie.

Don’t even think about using your selfie stick in New York’s Museum of Modern Art, because they are banned there, too. Other galleries and museums have also followed suit, including Smithsonian Design Museum, Boston’s Museum of Fine Arts, DC’s National Gallery of Art and the Getty Centre in Los Angeles.

Where else do you want to see selfie sticks banned? Do you think it’s a good idea or OTT?

More on selfies and social media