Zimbabwean dictator, Robert Mugabe, has taken a bit of a fall on the red carpet at the Harare International Airport. And while Mugabe’s information minister tried to cover it up, Twitter has gone into meltdown. 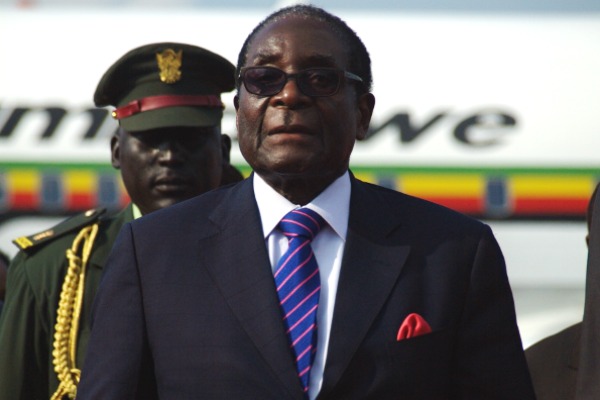 Robert Mugabe has become the target of much ridicule on social media. Reportedly missing a step when walking off a podium, the dictator was photographed losing his footing and taking a fall.

Journalists were reportedly rounded up by security guards and forced to delete any photos of the incident, while the 90-year-old’s information minister, Jonathan Moyo, quickly came to his defence, denying that Mugabe fell at all.

“Nobody has shown any evidence of the President having fallen down because that did not happen,” Moyo told Zimbabwe’s Herald newspaper.

“The hump on which the President tripped was formed by two pieces of the carpet which apparently had not been laid out properly where they joined. And to be honest with you, even Jesus, let alone you, would have also tripped in that kind of situation.”

Since the image was released, people have been going into meltdown creating memes with Mugabe at the centre of the joke. The hashtag #MugabeFalls has since gone viral on Twitter. Here are some of the most out-there images we’ve come across so far.

#DoingAnAbbott: Australians react to the PM on Twitter
The Queensland election: Milestones for women and the indigenous
#WeDontWantMenOnTwitter: The Saudi women taking Twitter back

8 hrs ago
by Marshall Bright

Genius (& Easy!) Tricks to Help Parents Tackle Every Home-Organizing S.O.S This Fall, According to Pros