There’s no shortage of spots around the country to sit and watch the sun set for the day. We’re truly spoiled for choice. But therein lies the challenge. Where are some of the sunset spots in the Australia and where can you set up camp and get the best viewpoint? Here are our top 10 spots around the country. How many have you seen? 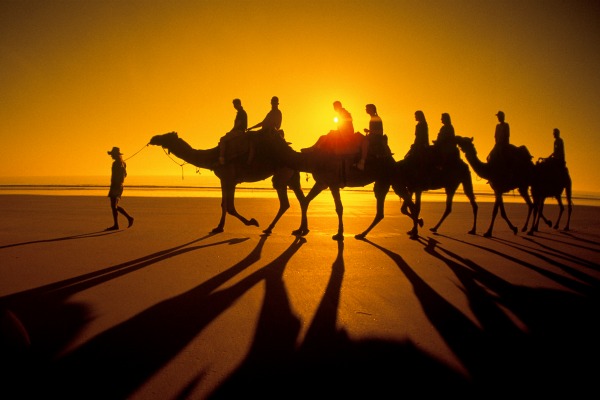 The sky lights up and colours of red ochre and burnt yellow linger over the water of the west long into the evening. Cable Beach is where the locals and visitors gather to watch the sunset in Broome and there are also walking, camel and hovercraft tours at sundown, which make the most of the atmospheric glow. 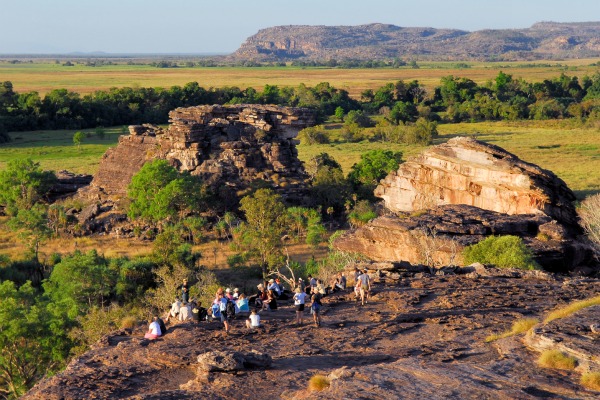 The rustle in the trees and the view of birds flying overhead make the historical area of Ubirr in the heritage-listed Kakadu National Park come alive. Walk up to the lookout overlooking Magela Floodplains and take in the rich ecological and biological diversity of this cultural landscape, which has been lived on and cared for by the traditional Bininj Mungguy people for more than 50,000 years. 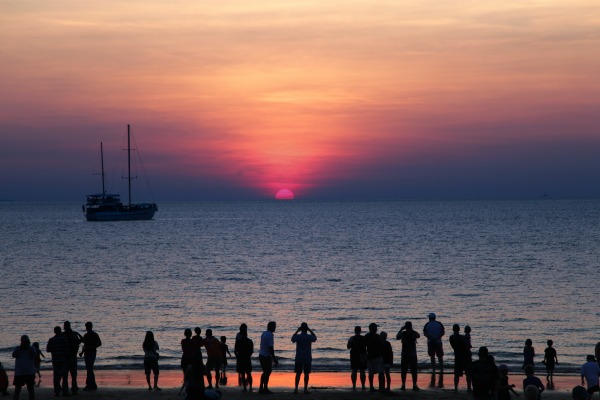 The greatest sunsets aren’t just reserved for those in remote areas of the country. In Darwin, there are great spots to sit and watch the sun set. Head along to the Mindil Beach Sunset Markets which are held during the dry season (from May until October), find a seat on the beach with the crowd and watch the day come to a close, perhaps with a glass of wine in hand, too. 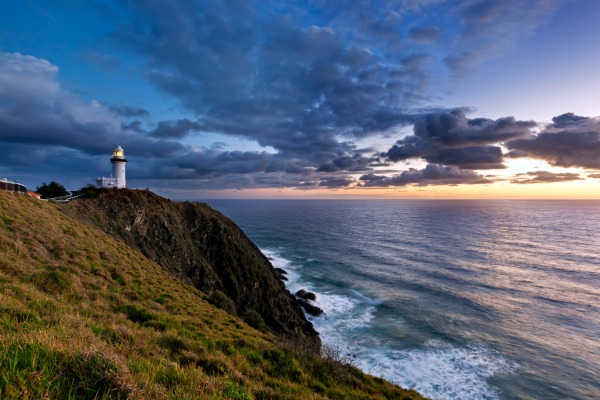 Walk or drive up to the easternmost tip of Australia in Byron Bay and watch as the sky lights up in colours of fluoro orange, pinks and purples. You might even be lucky enough to spot a dolphin or a whale in the water in the distance. 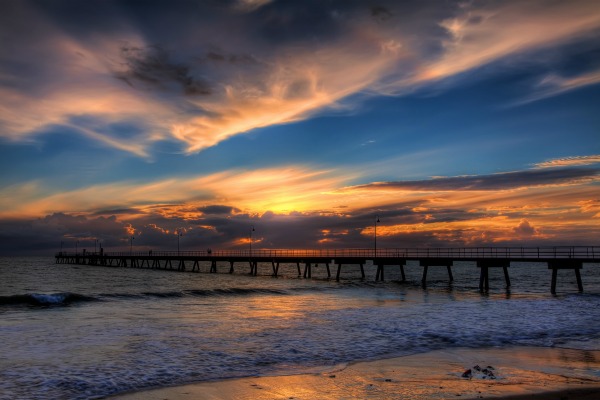 If you’re in Adelaide, or just passing through, it’s worth a tram ride to Glenelg for the day, even just to get a glimpse of the sunset while you’re there. The coastal town is right at the end of the tram line, just 11 kilometres out of Adelaide city. Take a stroll along the pier and feel the stillness in the air as the sun sets and lights up the sky. 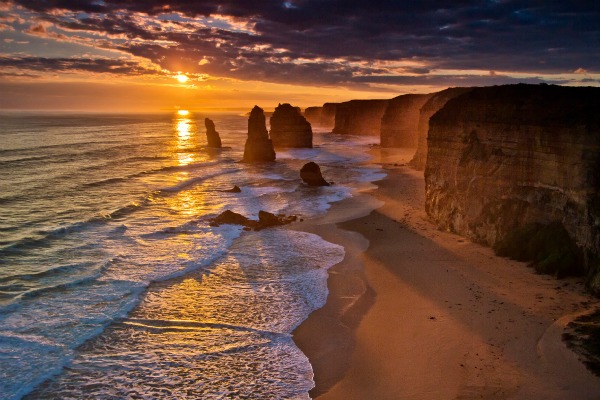 One of the highlights of driving along the Great Ocean Road is stopping to see the limestone rock formations called the 12 Apostles. The view of the Apostles is enchanting by day, but when framed by the burnt sky as dusk falls, it is something else. 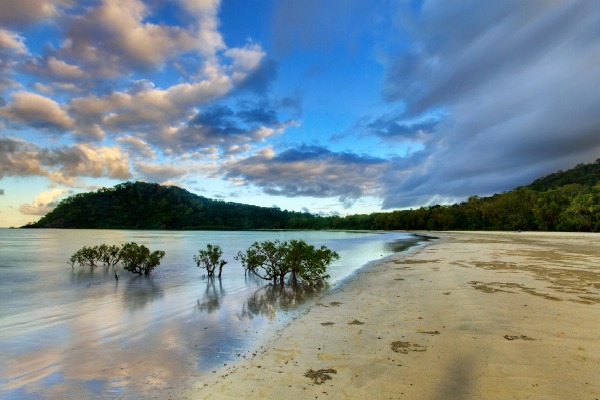 Up towards the north of Queensland and tucked into the Daintree Rainforest, Cape Tribulation is around 140 kilometres from Cairns. It’s quite secluded and takes a bit of effort to get there, but the 2.5-hour drive through the rainforest is worth the trip in itself. Taking in the sunset on the beach, where the forest meets the reef, is just the cherry on top. 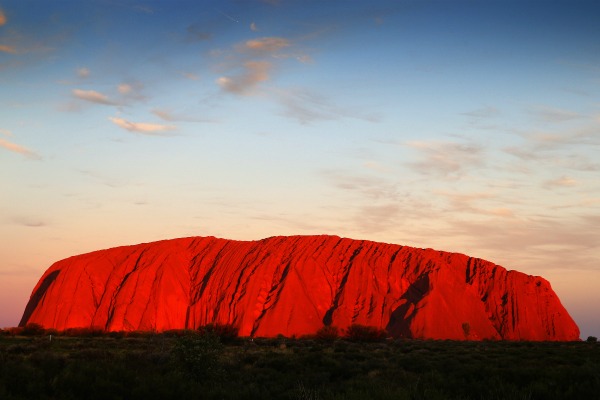 Uluru, or Ayers Rock as it is also known, is sacred to the Anangu people of the area and holds great significance. It was listed as a World Heritage Site by UNESCO and has a long important history, with ancient cave paintings found in the area. It is truly one of the most magical and culturally important places to watch the sky light up as another day comes to a close. 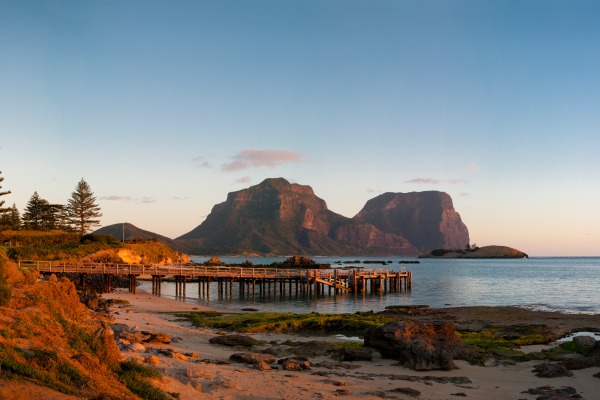 A boomerang-shaped island off the coast of New South Wales, Lord Howe Island is just a two-hour flight from either Sydney or Brisbane. After taking in all the wildlife, you can take hiking, bird watching and snorkelling trips during the day, take a seat at one of the restaurants or hotels on the island and take in the view of the water to watch as the sky changes colour before fading to black. 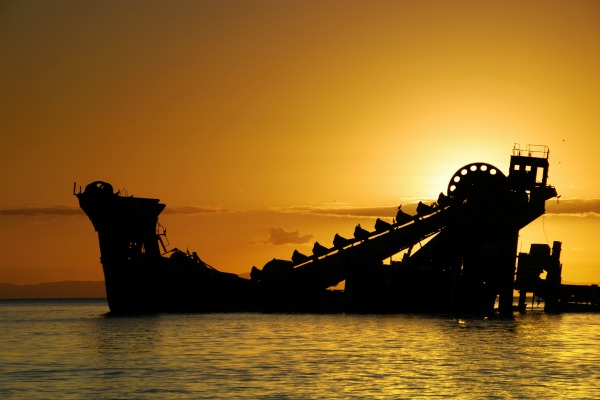 Watch the sun recede beyond the horizon in Tangalooma on Moreton Island with your feet in the water, getting ready for the wild dolphins to come in to shore to feed for the night. Or take a stroll along the beach and watch as the Moreton Bay shipwreck casts a strong silhouette in the distance.

Where are your favourite sunset spots around the country?