With its cutting-edge bars, funky restaurants and creative cuisine, Melbourne has developed a well-deserved reputation as the nation’s premier foodie destination. Some of the city’s best eating and drinking establishments can often be the hardest to find, unless you happen to be in the know — and now, thanks to the authors of Flavours of Melbourne, you can be!

The recently-updated second edition of the best-selling book, Flavours of Melbourne,(Smudge Publishing, $70) explores the city’s nooks and crannies to present an updated guide to the best eateries in Melbourne. The bold tome, written and edited by avid foodies, Jonette George and Ethan Jenkins, features a mix of the city’s newest and most established restaurants and bars, resulting in an eclectic range of chic, authentic and sought-after dining experiences that could only be found in Melbourne.

Of course, it’s not just about the food, with a smattering of sublime coffee shops and a bar or two making their way into the book, as well. In no particular order, here’s a round-up of some of the most interesting and unusual entries. 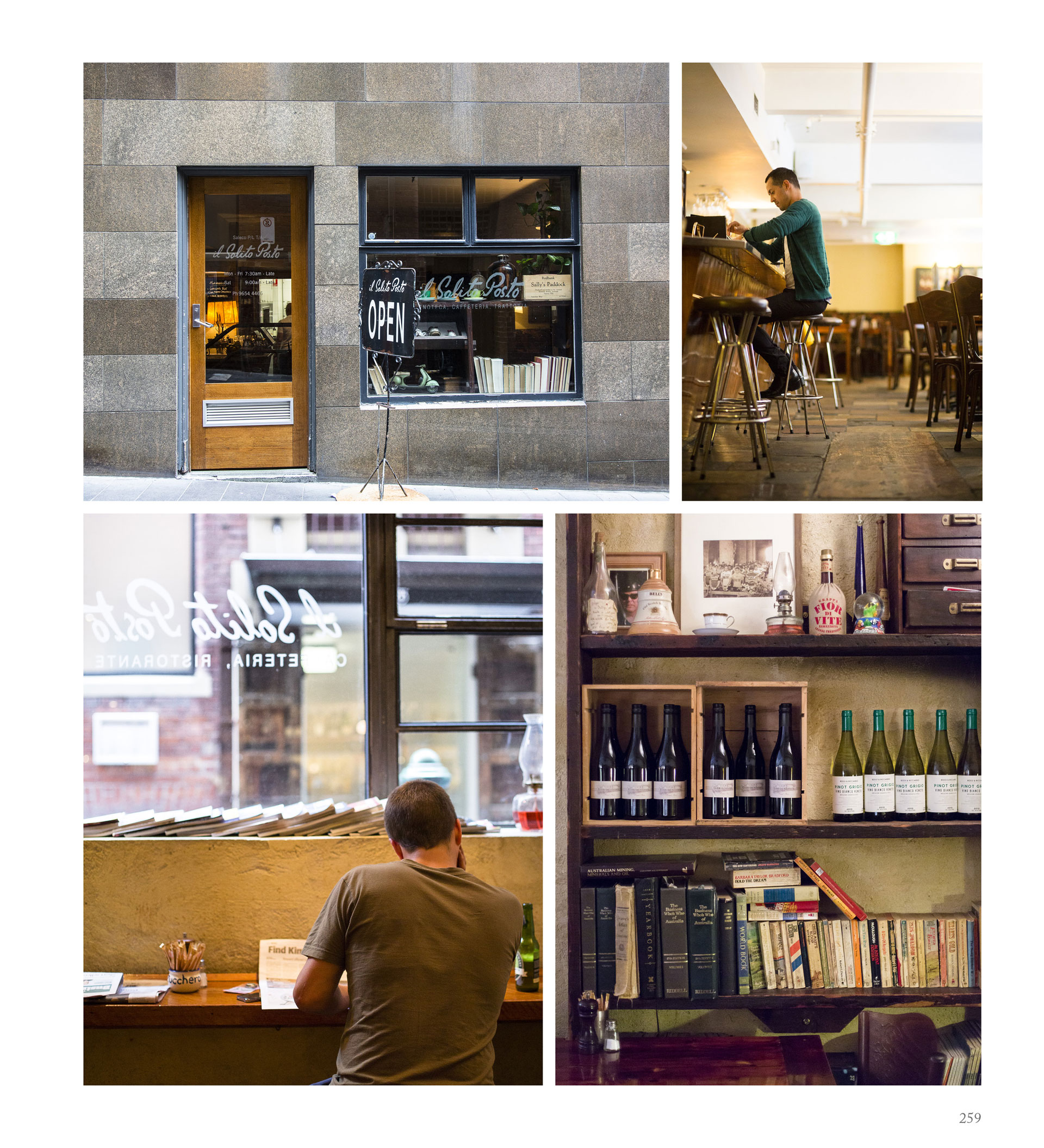 One of Melbourne’s first basement restaurants — although it’s located on Collins Street, you enter via George — Il Solito Posto has become something of an institution since opening its doors almost two decades ago. Dishes are so authentic, they’re “capable of whisking you away to Italy”, and their desserts are legendary. “The Affogato, with its beautiful presentation, has developed a near-cult status,” George and Jenkins advise. Make no mistake about it, those in the know go to Il Solito Posto. 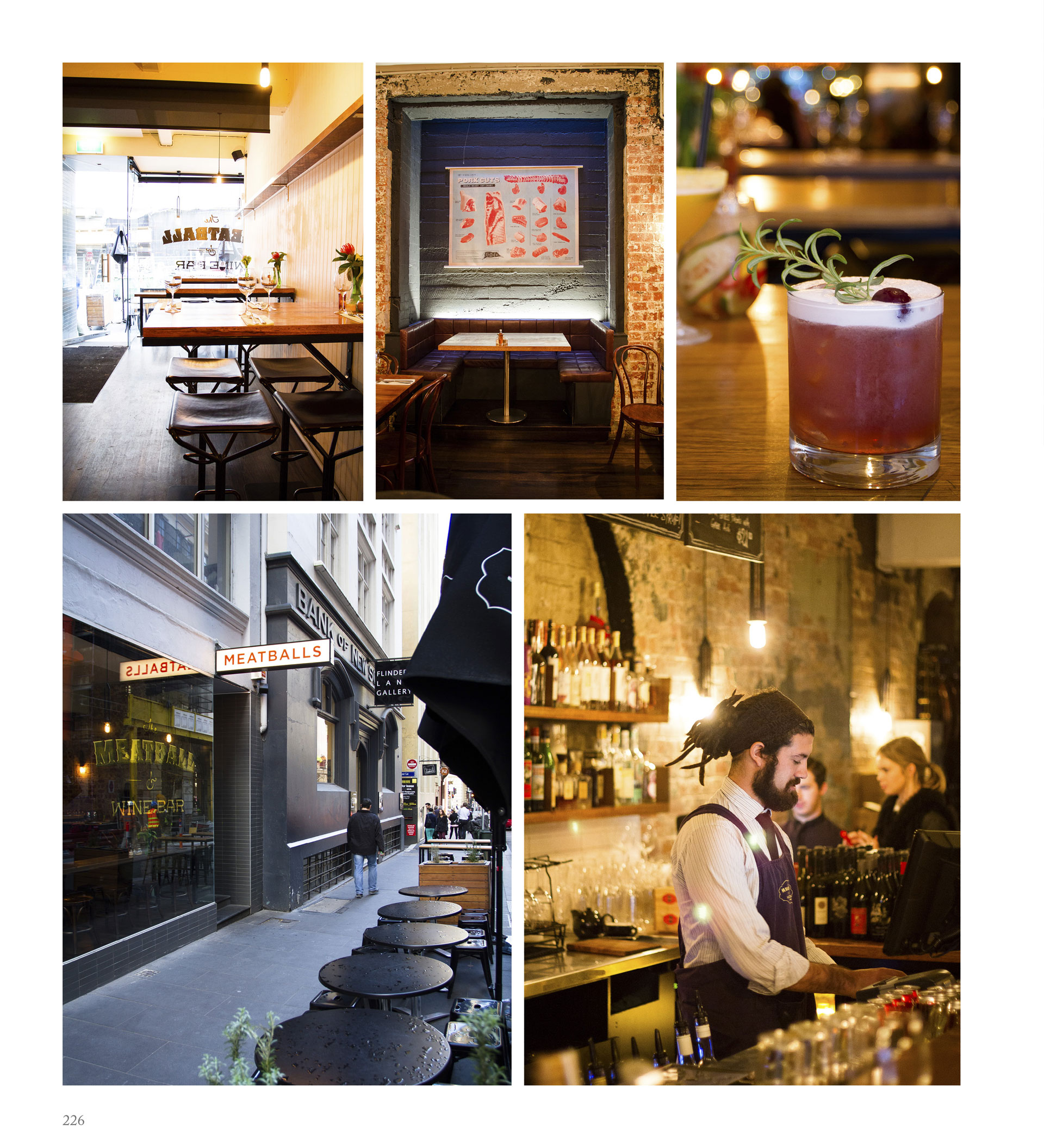 Since opening on Flinders Lane in 2012, owner Matteo Bruno has had his hands full with this busy establishment. He has since opened two moreMeatball & Winebar locations, in Richmond and Collingwood, and his restaurants caters to both carnivores and vegetarians, with a selection of meatballs — choose from pork, beef, chicken, fish or vego — available alongside your preferred sauces and side dishes. “You can mix and match to create a surprising number of dishes,” the book advises, “and all balls are gluten free.” 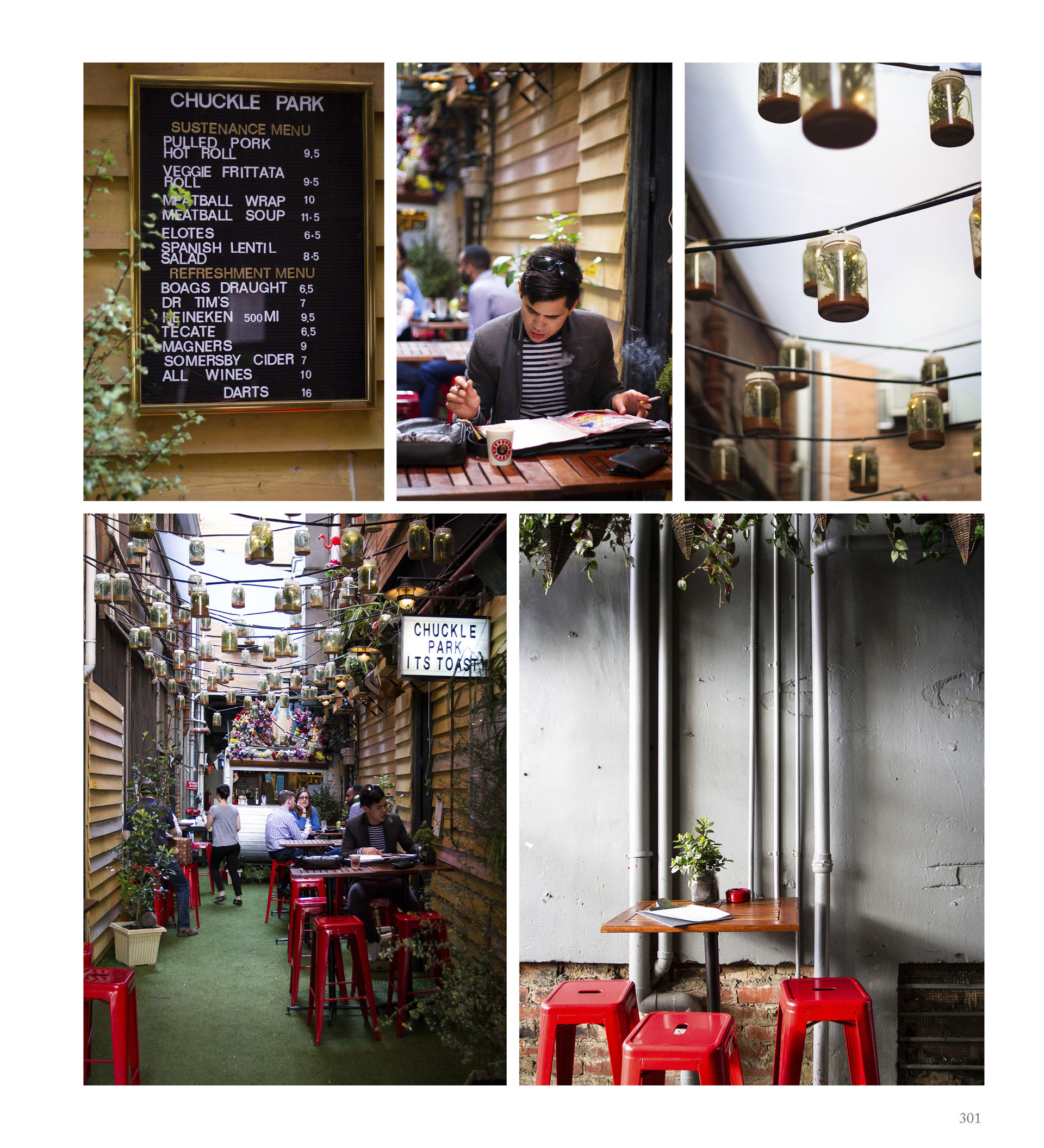 A laneway eatery inspired by 1970s caravanning holidays, Chuckle Park is a real find on Collins Street. Open midday until 1 a.m., the cafe “supplies a breath of fresh air during an all-night soiree,” the authors promise, “but it also stands alone as a self-contained cafe, great for grabbing lunch or dinner.” Astroturf lines the full length of the laneway and food options include pulled pork rolls, frittata and meatballs made from Grandpa’s authentic recipe. 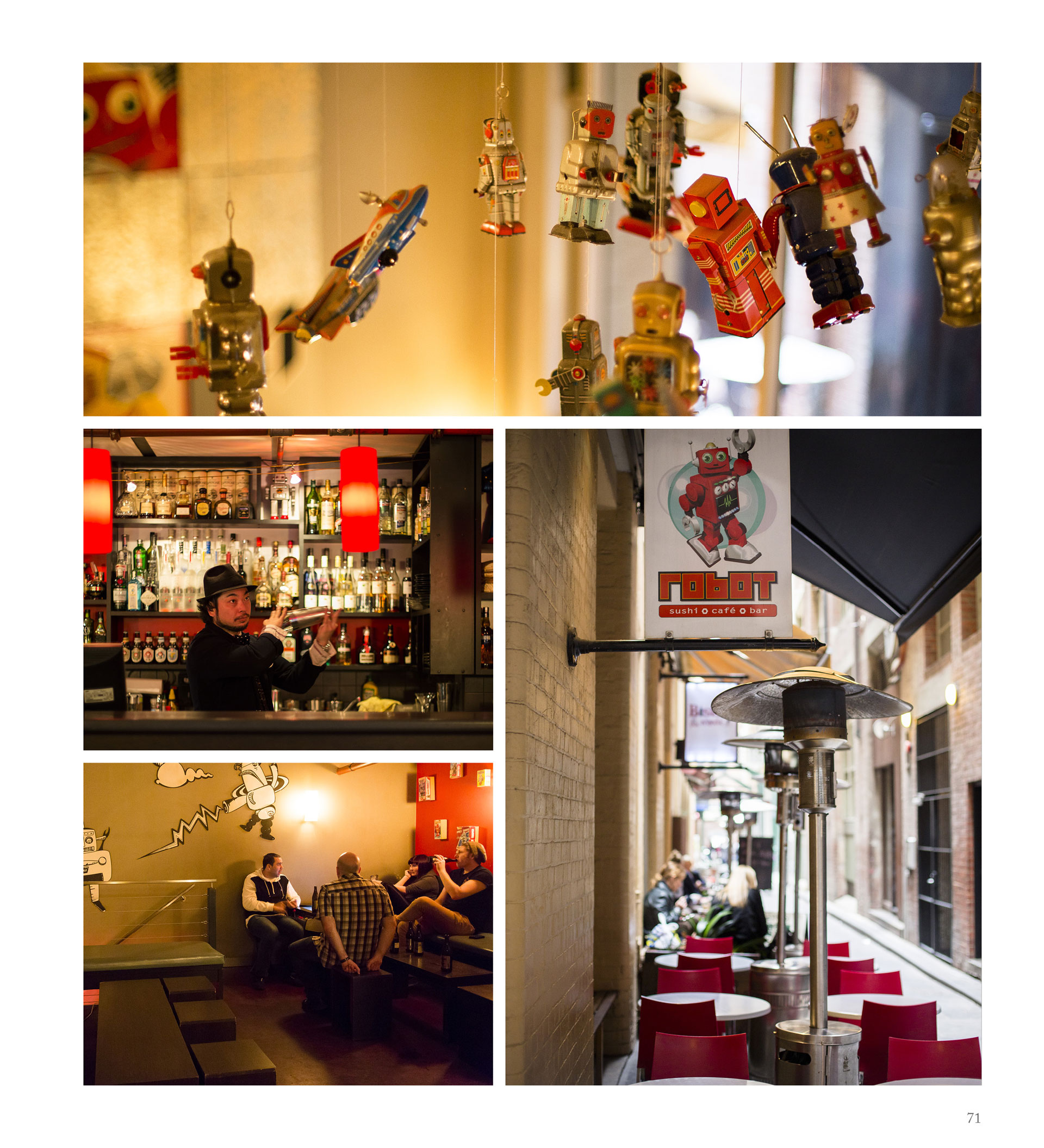 Yet another hidden delight located down one of Melbourne’s many lanes and alleys, Robot Sushi is a sake and sushi bar that serves up a great selection of Asian beers, wines and cocktails. The food on offer includes traditional Japanese fare — think edamame, takoyaki and, of course, sushi — alongside pizzas with a Japanese twist and even cheese plates.

Keen on some A-list action? Check out Melbourne’s celebrity restaurants >> 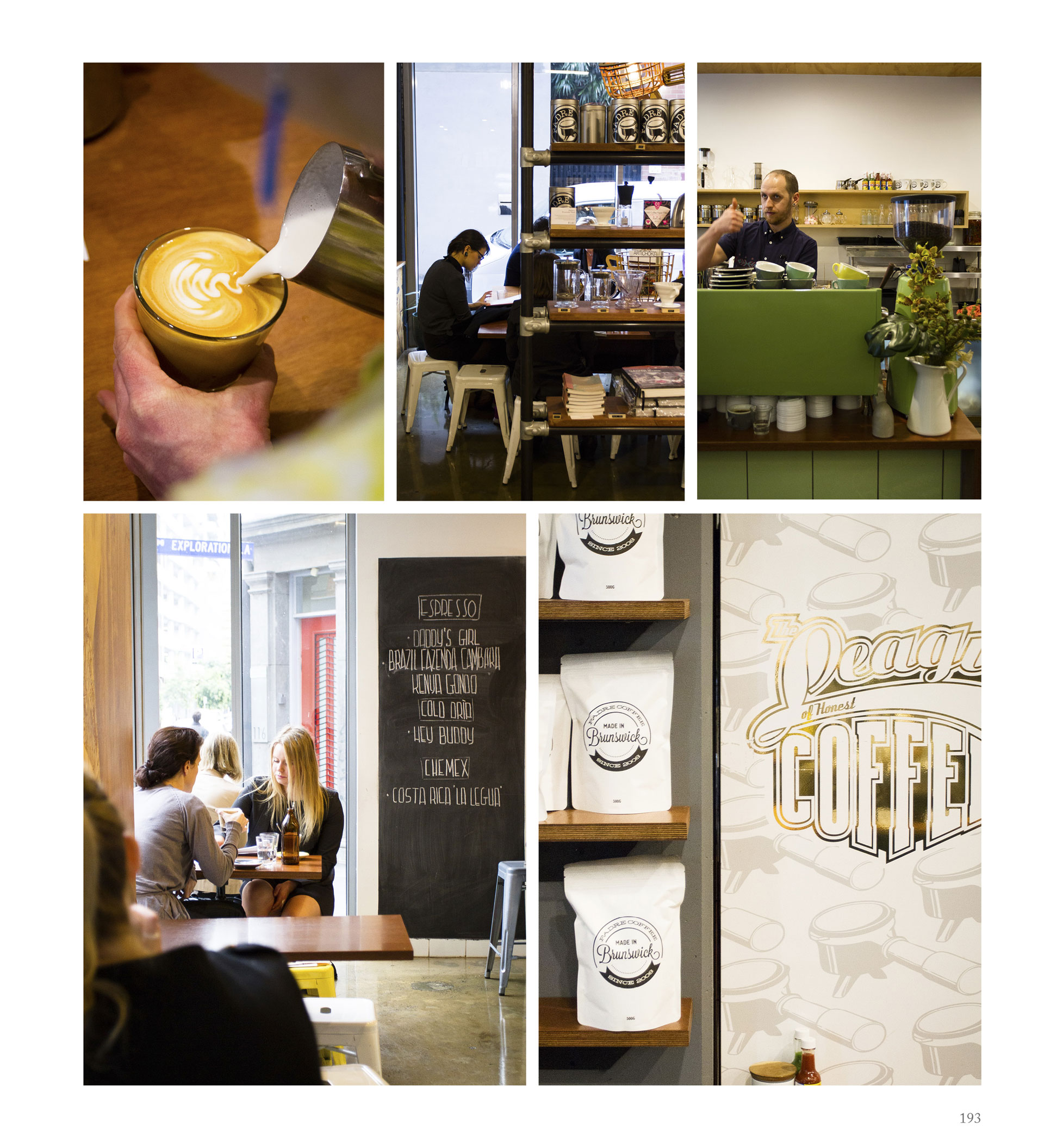 Located at Exploration Lane in the city, The League of Honest Coffee is “a little unique” in that it delivers the vibe of a local, neighbourhood coffee haunt, but it’s located in the middle of the CBD. “We recommend ordering a coffee and taking a seat at the brew bar for a firsthand view of the bright and friendly baristas as they work their magic on the League’s famous slayer espresso machines,” the authors advise. 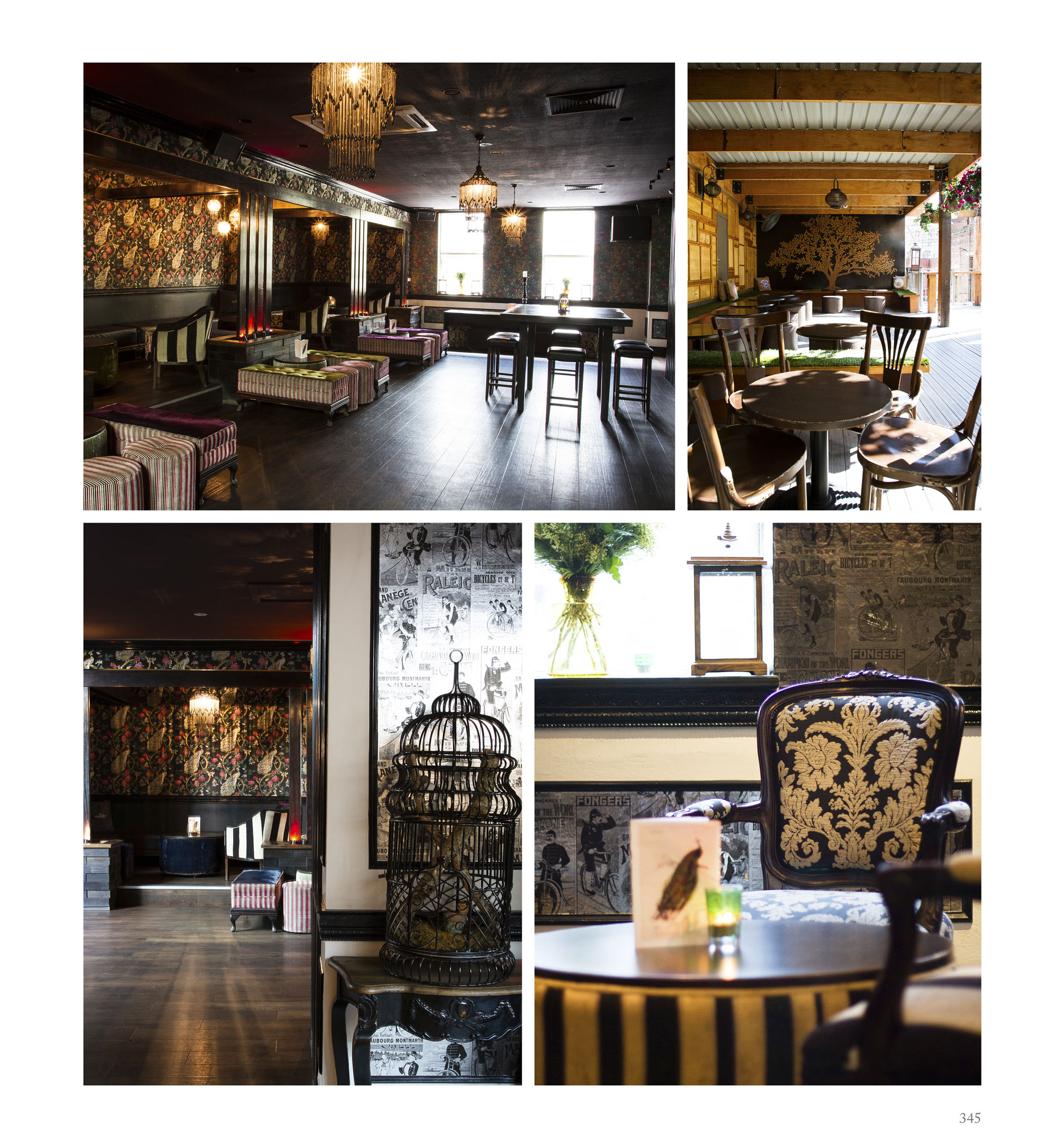 With three distinct areas — The Cocktail Lounge, The Peacock Lounge and the glorious rooftop — The Emerald Peacock offers a mix of retro styling and eclectic decadence, complete with ornate, lush furniture, glam wallpaper and wood panelling. Describing the rooftop as the “piece de resistance”, George and Jenkins say the upstairs zone of this swanky pub gives “a more relaxed vibe” than downstairs, with beautiful views of the city skyline to boot. 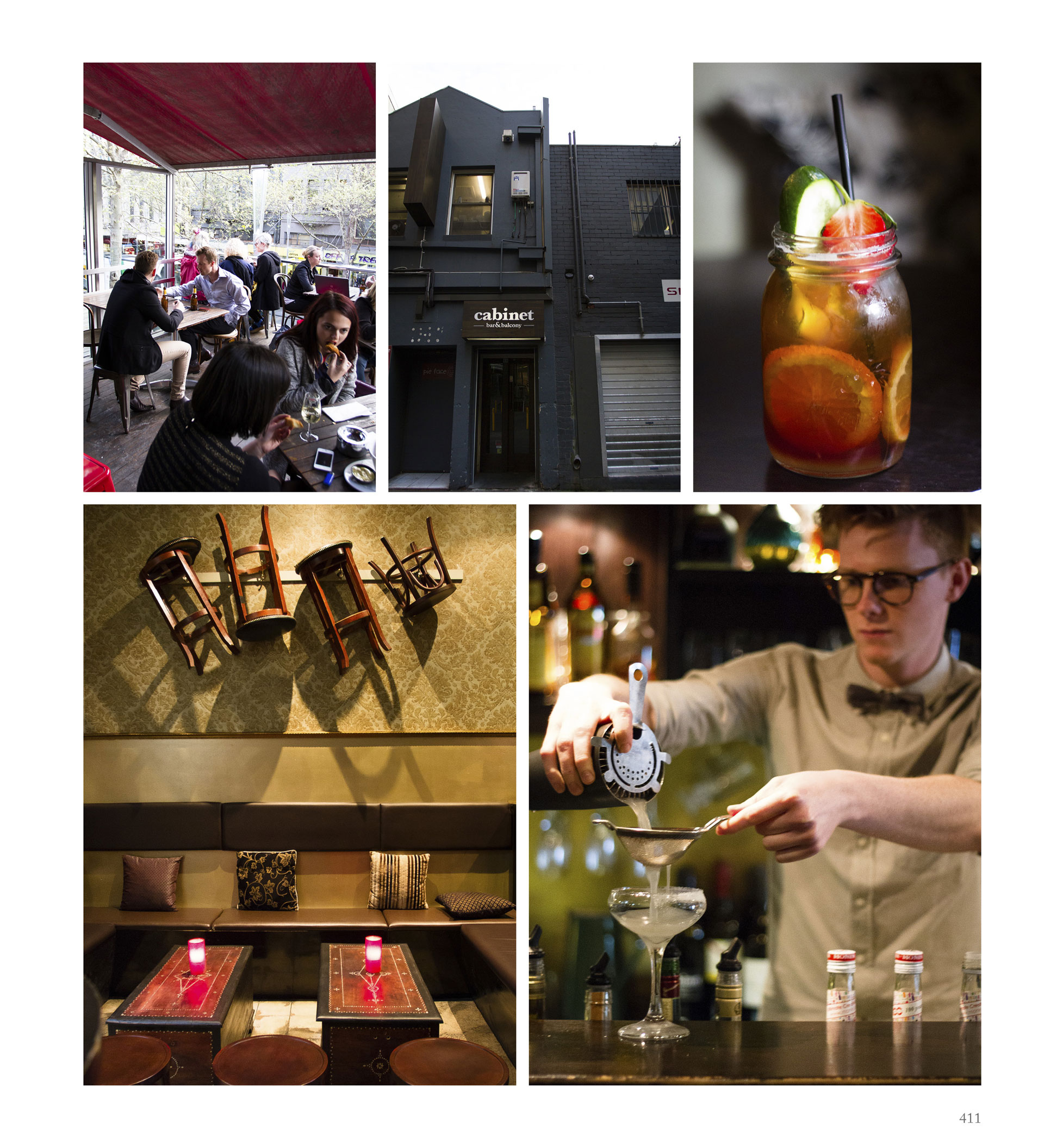 “Finding a secluded and cosy bar in the Melbourne CBD is a rarity, and Cabinet Bar & Balcony is nothing if not an insider’s hangout,” the book reveals. Blackboard menus offer delicious dishes designed for sharing, including eggplant chips, quinoa and smoked salmon salad, fried olives stuffed with feta and a range of flatbreads. Whether you’re chasing a quiet drink, a romantic meal or a fun night out, Cabinet is not to be missed.

Is Melbourne romantic enough? The world’s most romantic cities >> 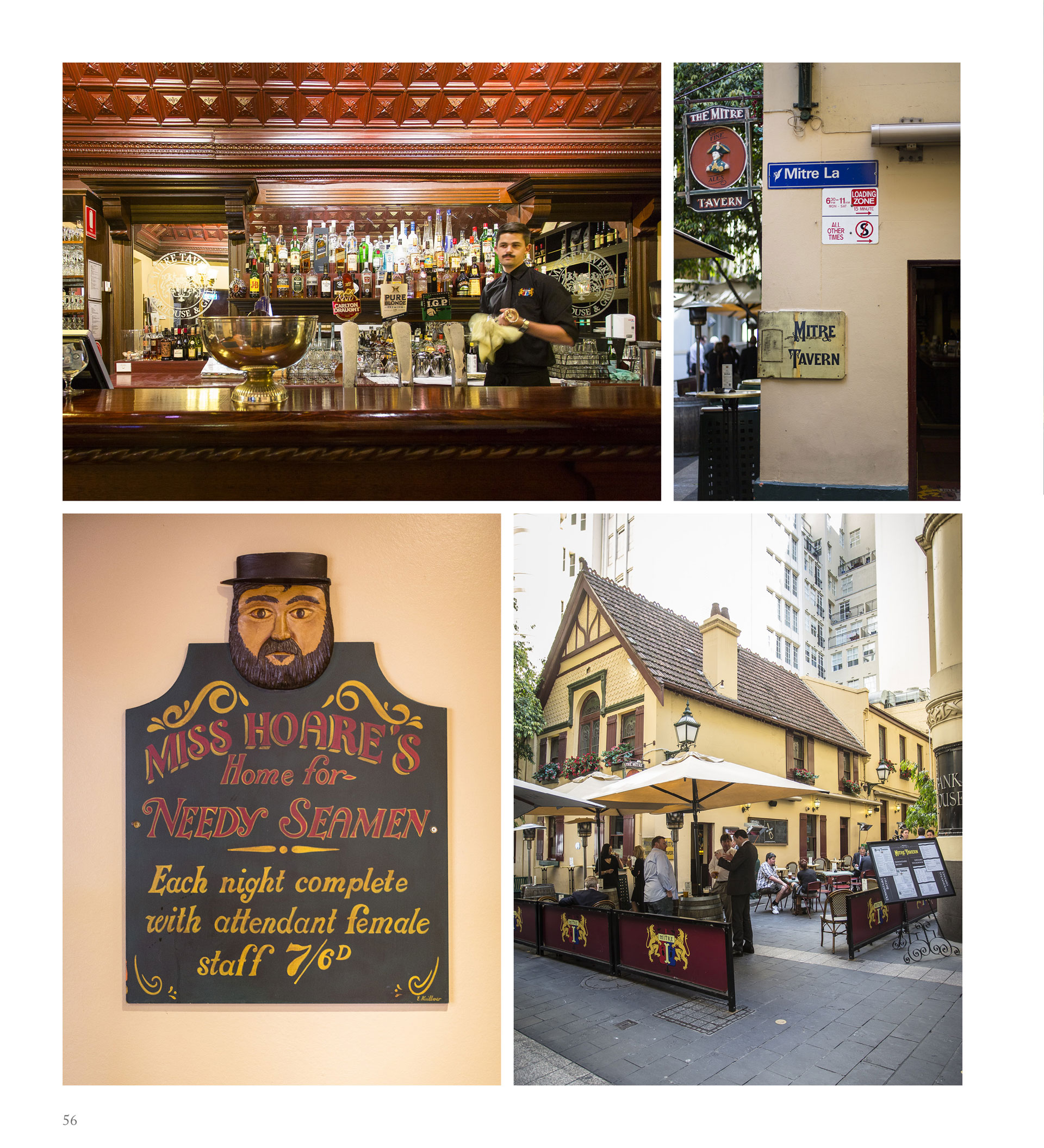 With a history spanning more than 140 years, the Mitre Tavernis home to one of the city’s largest beer gardens, with over 400 square metres of drinking space. You’ll find it nestled in one of Melbourne’s oldest buildings on Bank Place, a narrow, elegant laneway in the heart of the legal precinct. The go-to dish is the steakhouse pork ribs, according to George and Jenkins: “Six whole racks of American pork spare ribs are left marinating for six hours… the meat is so tender it falls off the bone.” 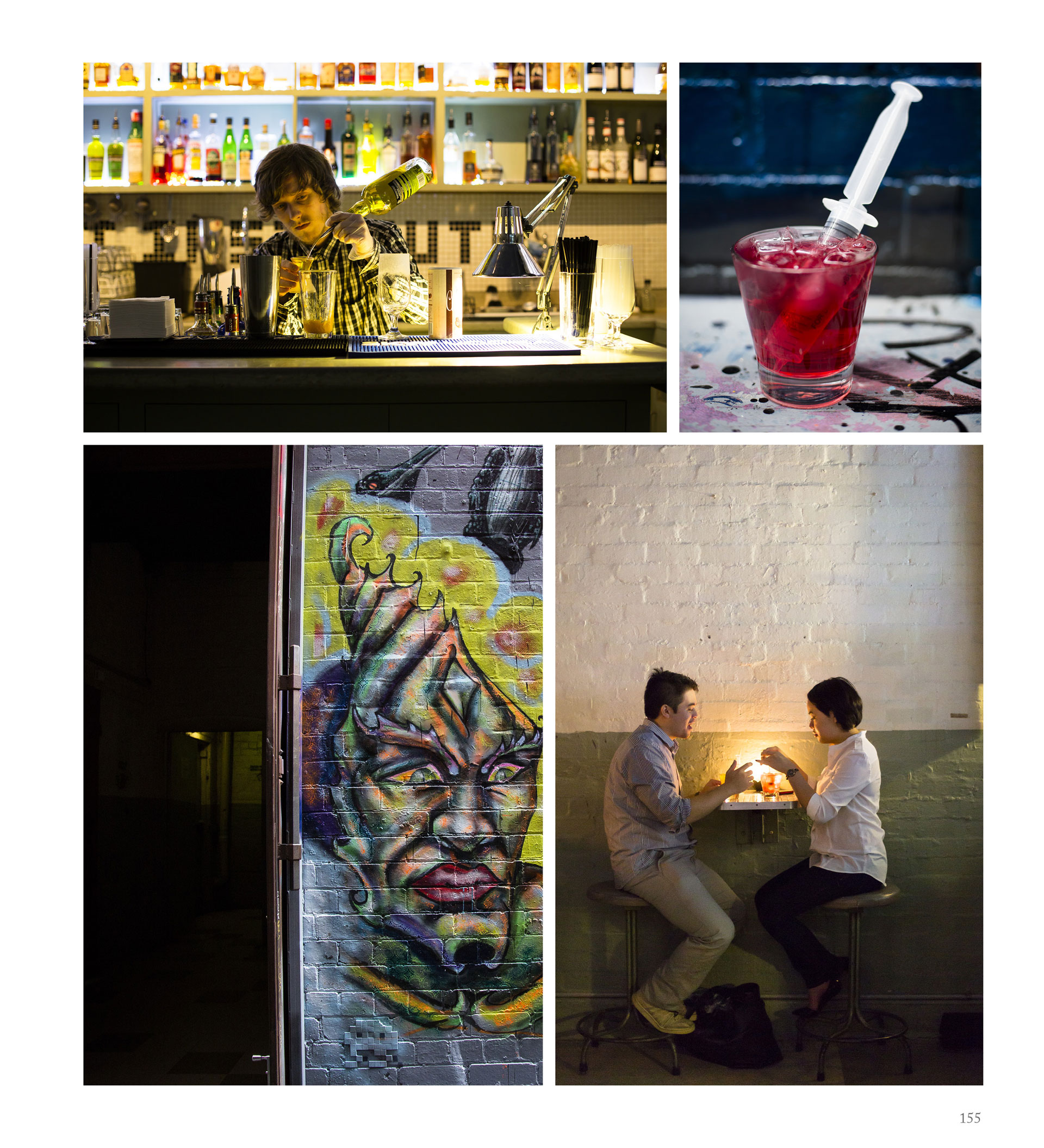 In true Melbourne style, The Croft Instituteis so well disguised, you may not actually find it without detailed instructions. “Its laneway is barely signposted and ends in a dead end, but that’s all part of the adventure of this unique bar,” the authors explain. The pay-off is definitely there, as the cocktail kings behind the bar are so keen to please, they construct drinks based on guests’ individual tastes. You’ll have a ball — if you can find it, that is. 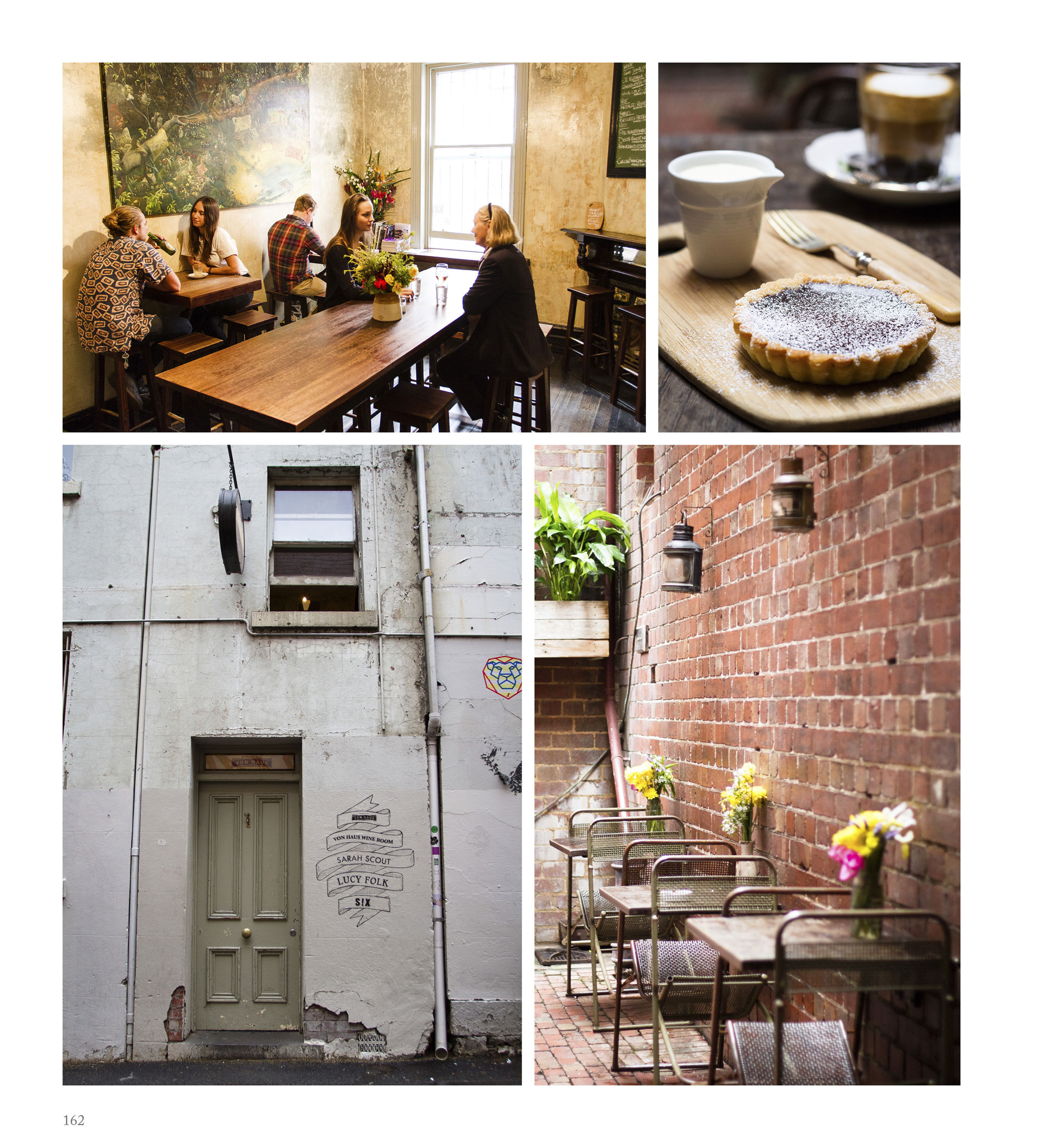 A cute wine bar that occupies a space “about the size of an apartment living room”, Von Haus is certainly an intimate venue, but that is all part of its old-world charm. Owner Deven Marriner says they aim to “serve each customer like a personal guest”, and it appears to be working. In a former life, the space was an art studio for painter Eugene von Guerard, but today, it offers breakfast, lunch and dinner via a seasonal, French-inspired menu that changes daily.