Kate’s wardrobe for the royal tour of New Zealand included turquoise blue, bright red and emerald green. We’re loving the canary yellow dress she wore to touch down in Australia, and are excited to see what colour of the rainbow she chooses next. 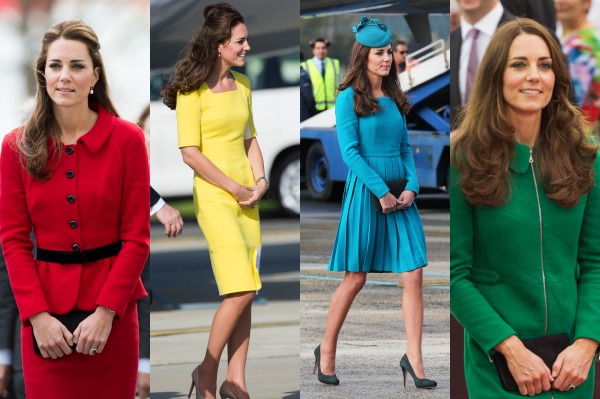 The Duke and Duchess of Cambridge have arrived in Australia, and as well as cooing over adorable Prince George, we’re fascinated by Kate Middleton’s wardrobe. This is one princess who knows how to make an entrance!

Kate chose a scarlet Luisa Spagnoli suit for the royal visit to Christchurch, adorned with black buttons and cinched in at the waist with a black belt. Her colour choices didn’t go unnoticed by the locals — black and red are the official colours of the region of Canterbury. Always keen to recycle her outfits, Kate purchased the skirt suit in 2011 and first wore it on a visit to Scotland later that year.

At Dunedin Airport, Kate looked stunning in a turquoise blue pleated dress by New Zealand designer, Emilia Wickstead. She accessorised it with a Jane Taylor hat of the same shade, a black clutch and a large silver brooch in the shape of a fern — the New Zealand national emblem.

Kate wore an emerald coat by Canadian designer, Erdem, over a Suzannah dress as she and Prince William greeted 10,000-strong crowds on the streets of Cambridge. Apparently, her husband wasn’t 100 per cent sure about her outfit: Kate reportedly told a local well-wisher — 68-year-old Evie Hayes — that, “William thinks it is a bit bright.”

Kate Middleton arrived in Australia like a ray of sunshine in an eye-catching yellow dress by London-based Serbian designer, Roksanda Ilincic. The fitted dress paid tribute to one of Australia’s national colours, but it seems not everyone was in admiration. Stopping to chat to the crowds at the Sydney Opera House, Kate apparently whispered to one greeter that, “William said I look like a banana!”

Red and yellow and blue and green — Kate still has a few days to check off every colour of the rainbow.

Will and Kate: Non-traditional and why we love it
Why the Queen offered Kate Middleton a makeover
Plastic surgery: Kate Middleton’s nose in hot demand