What it is about these places we don’t know, but what we do know is they make for a great romantic getaway with your partner, and with Valentine’s Day just around the corner, what better treat could you ask for? 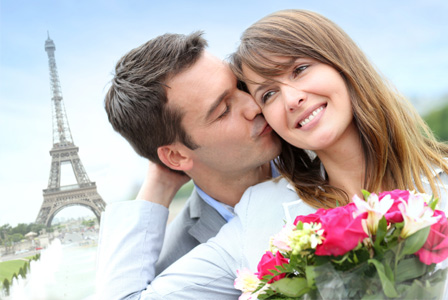 There are some cities that simply ooze romance; it’s in the very fibre of their existence. These are places where locals seem to be perpetually smitten with each other, hanging off of one another as if to be separated would kill them; where the lights and buildings that make up the city whisper ancient stories of romance.

Restaurants line the streets, cafes and bars encourage chance encounters and, above all, travellers, too, find themselves wrapped up in the magic.

Rediscover each other as you explore a new city, and surround yourself with enough romance to last you the rest of the year. Or at least a good couple of months.

Here is our pick of the world’s most romantic cities — start planning your trip now.

The quintessential romantic city. No other place in the world says romance quite like Paris. Everything you could ask for is here: fancy restaurants, great wine, a fascinating history and beautiful architecture. Whether you’re walking along Monteparte, visiting the incredible museums or just relaxing in Paris’s ubiquitous cafes… Paris is the city for lovers, end of story.

Buenos Aires takes Parisian architecture, melds it with Italian food and culture, and adds a sizeable dosage of Spanish passion. The result? A fantastic city with so much to offer a travelling couple. The leafy streets of trendy Palermo make for the perfect getaway.

Want to know where you can enjoy some of the best wine in the world? >>

Romance may not be the first thing you think of when someone mentions Colombia, but the country has come leaps and bounds since it made our newspapers decades ago. Nowhere quite demonstrates this like Cartagena. It’s one of the most beautiful cities on earth, and with its great restaurants and colourful local culture, it’s sure to make you both fall in love all over again.

Fez is an ancient fortress; a myriad of maze-like cobblestone alleyways punctuated with mosques, charming shops, tea gardens and spices. Chaotic, authentic and utterly engrossing, Fez is a feast for the senses, and the perfect place for an intensely romantic trip.

Prague is one of the most romantic cities in the world and the perfect place for a hedonistic weekend. British bucks-do goers find their home here, but you can ignore them as you wander around the archiecturally stunning main square, explore the historic bars and drink copious amounts of delicious beer (yes, you might run into the “lads” there!).

Kyoto is a city that defines tradition. As well as boasting incredible architecture, it’s a place you and your lover can indulge yourselves in several romantic pastimes, including bathing in an authentic Japanese bath house, or taking a stroll in a Japanese garden. Be sure to stop in at a tea house for the authentic Japanese experience.

New York City is a city so full of character that it can be overwhelming at times. Life in the city is nothing short of a film script, but that’s exactly what makes it so romantic. Some of the best restaurants, cafes and bars await you, as well as an unrivalled (if chaotic) atmosphere. Who could fail to fall in love with a city that casts you as its main star?

Our very own Melbourne had to make its way onto this list. While the rest of the world might not always think of Australia and romance in the same sentence, as we all know, Melbourne’s green streets and world-beating restaurant scene make it a city for star-crossed lovers.