From Driza-Bone coats to Dunlop Volleys, check out the Aussie Olympians’ uniforms as they’ve evolved through the ages. Say goodbye to the old cringe-worthy get-ups and hello to the new casual-chic uniforms that are sure to give other international competitors a run for their money in the fashion stakes! 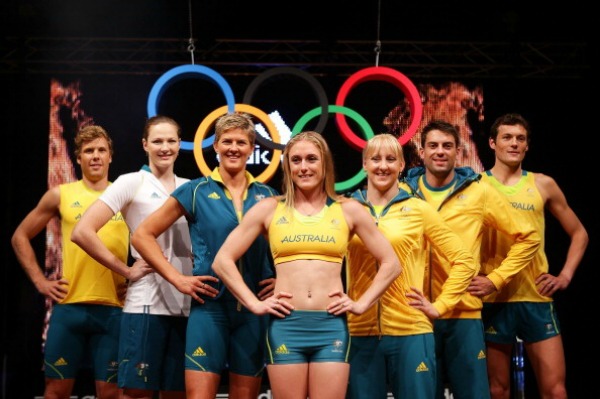 Looking back at the official Olympic uniforms over the past few decades reveals some high fashion moments — and some hideous ones! As the uniforms have kept in line with the fashion trends of the time, we’ve seen oversized gum leaf necklaces, bright printed shirts and formal suits. But whether showing off the traditional green and gold or putting an innovative twist on the Southern Cross, the ensembles have always been carefully considered and very symbolic.

The 1920s and 1930s saw tailored, casual-chic outfits, predominantly featuring a green blazer, trousers or pleated skirts and caps or hats. In 1956, the official uniform took a formal turn, possibly in response to official hosting duties. The 1970s saw interesting twists on the swimming costumes, with loud “groovy” patterns, such as the 1976 women’s full-piece which was covered with the word “Australia.” 1984 was another notable year in the fashion stakes, with the Aussie uniforms embracing ’80s fashion with open arms. Female athletes wore dresses featuring large emu and koala prints, teamed with gum leaf pendant necklaces and matching belts, while the men wore flashy kookaburra print shirts. In Seoul in 1988, the Driza-Bone coats and hats made an appearance, while Barcelona 1992 was all about bold patterned shirts. Sydney 2000 introduced the full body suits into the athletes’ competition gear; this was the year Cathy Freeman blitzed the field in her head-to-ankle suit, while swimmers also had the full-length option, which was said to reduce drag in the pool. Recent years have seen the official ceremony uniforms ditch the green and gold and return to formal suits in darker shades.

The official opening ceremony uniforms were revealed by the Australian Olympic Committee (AOC) during Fashion Week this year, with many leading athletes praising the designs. The outfits have gone back to the casual-chic uniforms of earlier Summer Games, with the dark green blazer making a re-appearance, this time teamed with white Dunlop Volley sandshoes. Matched with crisp white shirts, black ties for the boys and white long pants or knee-length pencil skirts, the outfits embrace the quintessential Aussie laidback vibe. Designed by Sportscraft and Volley, they achieve comfortable, relaxed style.

The competition uniforms were revealed in March and feature the traditional green and gold colour palette, with just a touch of fluoro lime green — or “acid buzz,” according to the designers. This Summer Games the outfits aim to be lighter, cooler and thinner. Athletes have a number of different options to choose from, including gold jackets with green trim, singlets, crop tops and bike pants of various lengths. With hidden Kangaroo prints on the garments, our Aussie athletes will look fantastic when out there competing for their country. Aussie Aussie Aussie!

24 hrs ago
by Julie Sprankles