Our fair nation has been blessed with over 37,000 kilometres of coastlines, so it’s no wonder that Australia is considered one of the world’s premier surfing destinations. Whether you’re new to the waves or you’re an experienced surfer, you’re certainly in the lucky country, as you’ll find everything from easy-rolling swells to challenging beaches with reef and point breaks. We profile five of the best surf spots in Australia that every water babe needs to add to their bucket list! 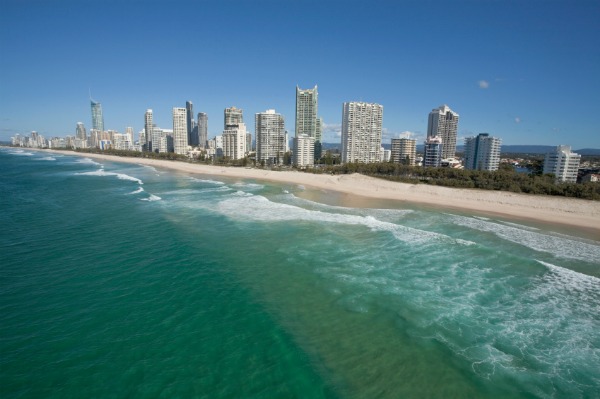 They don’t call the centre of the Gold Coast “Surfers Paradise” for nothing! This is where the international surfing community’s elite come to surf, which is a pretty strong indicator of just how good the waves are on the Gold Coast. With four epic point breaks at The Spit, Narrowneck, Palm Beach and Mermaid beach, there are plenty of opportunities to catch some world-class waves. Locals also like to check out Burleigh Heads and Kirra.

It’s part of the Gold Coast, but we would be remiss if we didn’t give Snapper Rocks its own entry on the list. Located at Rainbow Bay, this popular break is home to the famous “Super Bank”, regarded in surfing circles as the longest, most consistent and most hollow wave in the world. No surprises then that Snapper Rocks plays host to international surfing events, including the Quiksilver and Roxy Pro, Rip Curl Masters and MP Classic. “The swell here often reaches six to eight feet, and one good, clean wave can transport you from Snapper to Kirra, a distance of almost two kilometres,” says travel writer Cameron Wilson. “It’s also a favourite surfing spot of local world champs Mick Fanning, Joel Parkinson and Stephanie Gilmore, who enjoy nothing more than surfing their own local break when they’re at home.”

It’s widely know for its status as a prestigious wine growing region, but did you know that Margaret River is also the undisputed surf capital of Western Australia? With over 40 scenic kilometres of powerful waves and pristine beaches, the area attracts tourists and locals alike, including WA-based surf stars Taj Burrow and Jake Patterson. Surfer’s Point, which hosts the annual Margaret River Pro each March, is a favourite haunt, offering powerful ground swells and first-class waves.

The point break at Crescent Head is revered by long-boarders the world over, and for good reason, according to Australian Geographic. The coastline beginning just north of Port Macquarie through to Crescent Head is home to “four perfect right-hand point-breaks,” they report, which is “tailor-made for long-board riders, grommets and beginners and capable of generating miracle rides of 200 metres”.

Located around 100 kilometres south-west of Melbourne, on the Great Ocean Road near the towns of Torquay and Jan Juc, sits the small coastal town of Bells Beach. “Historically and spiritually, Bells Beach is the home of Australian surfing and today is still the site of the country’s oldest and most prestigious professional surfing event,” Wilson says. These days it’s known as the Rip Curl Pro, but more than 50 years after the competition kicked off in 1961, the winner still receives the traditional clanging bell trophy.