We all need inspiration, and what better way to get inspired than by artists who care about the environment? We showcase three leading artists who care — Ed Kashi, who raises awareness on environmental impacts in the Niger Delta; Anthony Heywood, who makes his work with waste and around environmental issues; and Daniel Clemmett, who uses car parts in his art.

Related story How to cloth diaper on the cheap 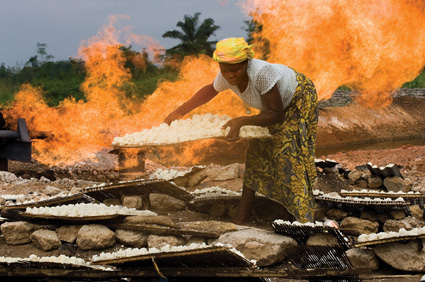 Ed Kashi is a US photographer who shoots to raise awareness for the environment, and social and political issues. In 2008 Ed Kashi produced a book with photographs about the oil and conflict in the Niger Delta called Curse of the Black Gold.

The book contains inspiring photographs revealing what the big oil companies are doing in and with the Niger Delta, including pictures of an oil spill on fire and polluting the air, and pictures of the people who are affected by it. For 50 years the oil companies have been reaping the rewards of oil, but they are not doing anything about the pollution from the oil spills or adequately compensating the people who live in the Niger Delta.

Based on his study of the oil exploitation and conflict in Niger Delta, Kashi won the “Earth Commission – 2009” from Prix Pictet, the world’s foremost environmental art awards, and travelled to Madagascar in January 2010.

“My work has led me to many places on this earth and it’s critically clear our world is under tremendous stress,” he says.

“The relationships we hold as human beings with the earth, and the issues that are raised about how we conduct this vital relationship, have developed into core themes within my work. Nowhere are the effects of this dysfunctional relationship more evident than in Madagascar.”

Ed Kashi is helping us see that we should make an effort to help people of the world and rethink our relationships with big business by looking for alternatives, including reducing our dependency on oil and the big oil companies.