Ruby Rose didn’t think in a million years she would be considered a fashion icon. She’s now taking her role as Maybelline cover girl a step further and has become a role model for young girls.

Ruby Rose is many things. An MTV DJ. A television presenter. A designer. A filmmaker. A Maybelline brand ambassador. A self-proclaimed “tattooed rock chick.” A fashion icon. And inspiration for anybody who struggles with mental health issues, sexuality or gender confusion.

Here are five reasons this Aussie chick is killing it right now:

Ruby was so shocked to be asked to take on the role of Maybelline brand ambassador in 2010 that she thought it was an April Fool. But it was real and Maybelline wanted her just the way she was. “For them it was quite a risk,” admits Ruby in an interview with beauty website Beauticate. “But they were like, ‘We love that [edginess]. Keep all of that.'”

The model grew up thinking of herself as a tomboy and being teased about her looks before realising she didn’t need to conform to a certain type of beauty. “I was like a little boy,” she said. “I liked playing football but I also had nice skin and I had really blue eyes and I had really big lips that people used to tease me about — but they ended up being positives.”

How to raise confident daughters >>

Ruby has described the fact that same-sex marriage isn’t recognised in her homeland of Australia as “heartbreaking” and said current Prime Minister Tony Abbott is the “worst Prime Minister we’ve ever had”. She’s engaged to Phoebe Dahl, fashion designer and granddaughter of Roald Dahl, and they plan to marry in 2015.

Ruby has also spoken frankly about her battle with depression. “I go from managing it, to not managing it, to managing it and then there may be a time when it’s not manageable,” she said. “You’ve got to think about your diet, that’s why I don’t drink. I take medication and sometimes you take it for so many years and then it doesn’t work and you’ve got to find a new one — and that period is a really crazy period.”

Know the warning signs of depression >> 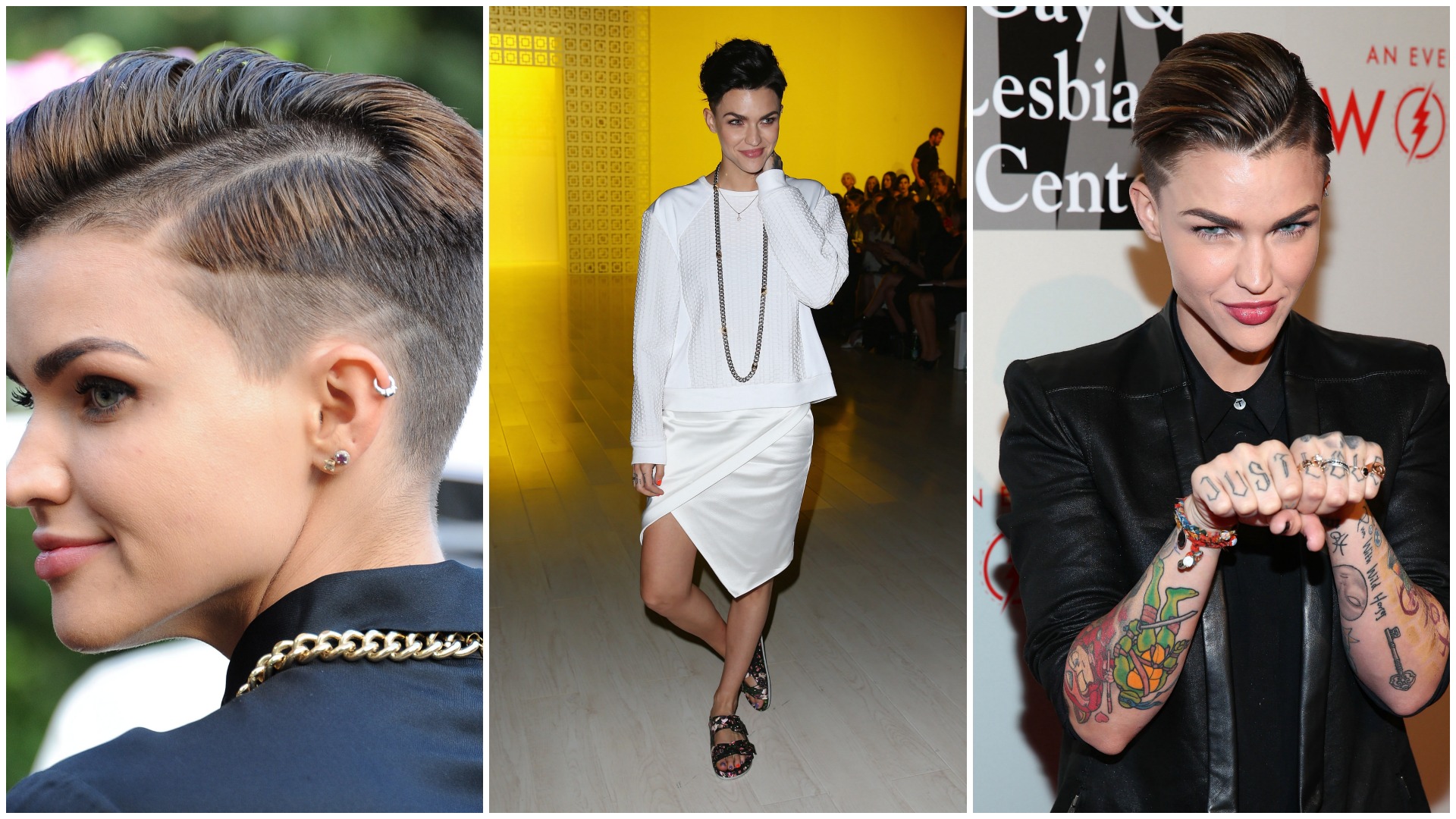 Androgynous clothing plays a big part in Ruby’s look. “When I got into modelling that was something I never knew existed,” she admitted. “I remember being at a Yum Cha restaurant with my dad and the owner coming up and saying ‘Excuse me, we’re trying to work out if you’re a handsome boy or a beautiful girl.’ It was a compliment and I was shocked, and when I thought about it I actually wanted to be a handsome boy.”

Ruby also likes to play with abstract shapes and soft tailoring and, of course, whatever she wears is accessorised with her 20-plus tattoos.

“It’s really tough out there, now you have social media and everyone has the internet,” said Ruby. “Girls are trying to be whoever their favourite supermodel or favourite singer is, and it’s important that not everyone that they’re looking to is flawless, and has this white picket fence story that they can’t relate to.

“The more we share with the kids of today, whether it’s depression, anxiety or sexuality, they can see that it’s not the end of the world, that it’s actually something they can use as a positive.”

Written and produced by Ruby, Break Free is a short film about gender roles and what it is like to have an identity that deviates from the status quo.