Just two hours from London, the glistening city of Palma on the island of Mallorca has it all. Small but perfectly formed, it’s the perfect capital city for a weekend of sun, sangria and Spanish paella. The island itself is magical, boasting everything from romantic bolthole B&Bs to Bikram yoga, painting classes to Pilates, but those wanting a simple weekend away would do well to stick to the capital, Palma. Built around the sensational 14th-century sandstone cathedral, the city is a gorgeous hub of cobbled streets, olive trees and teeny-tiny plazas, with stunning hotels and restaurants peppered throughout. It’s a very brief cab ride from the airport and a short flight so, fly out in the morning, and you can be poolside by lunchtime. 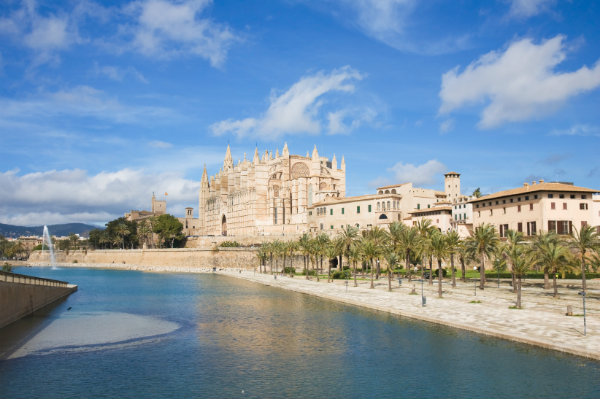 If you’re after something quite hip, the Puro Oasis Urbano, which resides within the very central quarter of La Lonja is where you want to book. Its decor is Marrakech meets Miami: lots of white leather sofas, Rajasthani mirrors and eclectic, citrus-silk cushions. The rooms aren’t huge, but you won’t be spending all that much time in there anyway and, if you feel lazy on arrival, you needn’t go far because the hotel’s restaurant, bar and roof deck, with its billowing tents and sleek plunge pool, are hot hangouts all on their own.

The Portixol at Calle Sirena 27 is a hotel which lies in the old fishing district of Portixol on the edge of the city. It’s a short walk from Las Ramblas (the city’s central street) and it is now a very trendy spot in its own right. The Portixol was one of the establishments which opened and helped to give the area this new-found image so it’s fast becoming old-school cool. The pool is for guests only, sadly, but the restaurant and bar area are hip hideaways from the pedestrian beach crowds by day, and popular watering holes by night. If you’re after a very strong, well-mixed aperitif, this is your place. Their wine list is also excellent, as is their restaurant if you don’t feel like moving again for food.

Dinner is always a late night affair in Mallorca, as it is in most of Spain, so don’t be surprised if first sittings in some restaurants aren’t until 9pm. Well worth this late wait, however, is Txacoli. Located in the wonderful Santa Catalina neighbourhood (do check this out by day as it’s home to a heavenly food market), the street on which the restaurant resides was recently pedestrianised so one can now enjoy the gorgeous Txacoli fare outdoors. Not for vegetarians, the house speciality is a gigantic T-Bone steak that is packed with rock salt and seared on a scorching flame. It is the finest meal imaginable and the wine list that accompanies the menu is extremely well thought-out.

If all that late night food and fanfare leaves you hungry for a little more excitement, head to Tito’s which has been a clubber’s favourite for many a summer. Spread across three floors, the glass lift will transport you into an exciting haze of heart-busting tunes that pump through the night. Wind down by walking back to your hotel along the marina’s edge. It’s tranquil, beautiful and one of the largest in the world.

This Viral & ‘Powerful’ Under-$25 Waterproof Speaker With Over 22,000 Reviews Is a ‘Must-Have’ for the Bathroom