Croatia has a varying natural landscape that boasts mountain vistas in the eastern and northern regions, fertile farmland throughout the middle country and Mediterranean topography along the Adriatic Coast. It’s a relatively small country – measuring a little more than 35,100 square miles – but has one of the most ecologically diverse environments in all of Europe. It is home to many national parks, more than 1,000 islands that dot its Adriatic coastline, and eight UNESCO World Heritage Sites, both cultural and natural.

Plitvice is a series of 16 turquoise-colored lakes and collection of waterfalls that flow into one another and create mass deposits of travertine. Waterfalls range from a few meters high up to approximately 70 meters. Plitvice Lakes National Park is located in the mountainous region of Lika. Its first conservation committee was instated in 1896 and in 1979 it was registered as a UNESCO World Heritage Site. 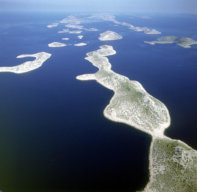 Situated south of the major city of Zadar, Kornati National Park is actually a collection of 89 islands, islets and reefs – called the Kornati archipelago – that occupies about 54,000 acres along the Adriatic Sea. What’s really unique about the Kornati National Park is the indented shape of the islands that produce dramatic “crowns” (cliffs) facing the open sea. The diverse sea life and topography make it a favorite spot for underwater adventurers.

Mljet is the southeastern-most of the larger Croatian islands known for its Mediterranean vegetation, clear seawater, smooth and sandy shoreline, and a wealth of underwater sea life. It is popular for its white and red wine, olives and goat cheese. Mljet has two saltwater lakes, Veliko (large) and Malo (small) Jezero, on the north end of the island with an old Benedictine monastery located in the middle of Veliko Jezero.

The village northwest of Dubrovnik has a population of just under 300 people. It has the oldest arboretum in the area that was built in the 15th century and has taken part in a five-century-long continuous development from Gothic Renaissance, Renaissance Baroque and Romantic forms to the present. The two Oriental Planes trees in the central market place of Trsteno are more than 500 years old.

The Zrmanja River is one of the most popular spots for water safari sports like kayaking and canoeing. And, with its turquoise-colored, warm water, we can understand why. It’s also very geologically diverse with an abundance of limestone and dolomite that dates back to nearly 220 million years ago. 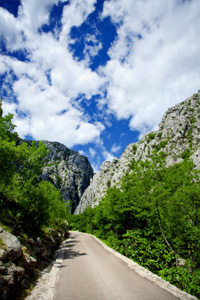 One of the oldest cities in all of Croatia, Trogir, was founded in the 3rd century B.C. by Greek colonists from the island of Vis. The city’s rich culture and Greek, Roman and Venetian influence is evident throughout the city, most obviously displayed in the architecture. In 1997, it was added to the UNESCO World Heritage List. It is the best-preserved Romanesque-Gothic city not only along the Adriatic, but in all of Eastern and Central Europe.