Remember when Rachel gave Joey a man purse for his audition, and everybody made fun of him for being girly? Well, don’t worry, Joey, because the joke’s on them. The man bag is now not only a totally acceptable male accessory, its sale rate is rivaling that of women’s bags. Women’s bags! The single most necessary female accessory there is! All I can say is, times have definitely changed since that fateful Friends episode premiered 16 years ago.

We now live in an age where metrosexuality is commonplace, and the man who fashion suits up is not only accepted, he is the norm. Thus all things that go along with having style are becoming staples of the male wardrobe, and this absolutely includes the bag he carries.

Cool new bags were all over the men’s runway this season, from fringy totes, to cross-strap messenger bags. This was likely in response to the growing demand for such items, which in turn caused prices for said bags to rise significantly. Quartz reports that based on a Euromonitor study, men now spend about $6 billion per year on high-end bags, with 5.9 million being sold in 2014.

According to this same study, one in five luxury bags sold is a “man bag.” That’s a pretty high percentage considering how many luxury bags women buy on average. The man bag however is not the only, shall we say, slightly more feminine style trait gaining popularity in the fashion world today. Here’s a look at four other man trends on the rise.

I feel like Jared Leto exemplifies this trend the best. The look, also sometimes called “Jesus hair” was popular in the early ’90s as it was a big part of the Seattle Grunge movement. Now, instead of long, unkempt locks that were more likely saying “screw you” to mainstream society than creating a fashion statement, long hair on men today is kept smooth, clean and even highlighted. It actually has a softening effect on hard, angular faces, and thus accentuates the feminine side, but you know, in a totally hot, manly way. 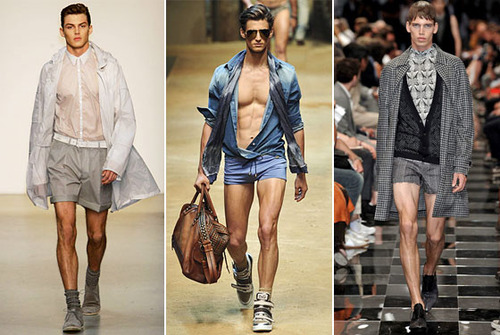 Who wears short shorts? Everyone now apparently. According to David Coleman for Wall Street Journal, men’s shorts are short, and getting shorter. I personally don’t feel this is a cause for alarm, as I like to see a nice leg on a man, but when you compare it to the shrinking glaciers, it seems terrifying. “In the past few years, the low-water-mark length of a 15-inch-or-so inseam receded to knee-length (11 inches), then a knee-baring 9 inches, to a quadriceps-exposing 7 inches and on to the newly fashionable thigh-flaunting 5 inches. If men’s shorts were a glacier in Greenland, scientists would be freaking out.”

Now I have to say, this one bugs me a bit because it’s not like we ever called nail polish “women’s only.” Nail polish has been available to both sexes, and has been used by both sexes for a while now. However, this is the first time it’s being marketed specifically to men. The new lacquer from NCLA and HUFF is called “Craig’s Black Lust,” and was named by pro surfer Craig Anderson. Apparently it’s masculine because it’s black and comes in a very basic, no frills bottle. Because dudes might like a nice, polished nail, but heaven help you if you hand them something in over-the-top packaging.

4. Meggings — aka men in tights

So this fashion trend just started to hit this past summer when NBA player Russell Westbrook of Oklahoma Thunder released an exclusive collaboration with Barneys and Jordan, trading his love for Rick Owens drop-crotch pants in favor of a snugger fit — aka leggings or tights. Of course, Westbrook considers them “athletic leggings” that can be worn under shorts when it gets cold, but it didn’t take long for the fashion industry to spin its own metro version of them. And just like that, the megging was born.

8 Accessories women love to see on men
4 Ways to improve his sense of style
Stock his wardrobe: The classic guy

58 mins ago
by Taylor Lane

Target Just Marked Down Dorm Essentials Up to 50% Off, But It Won’t Last Long