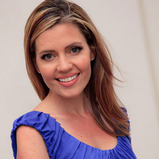 Since my family “went viral” with “Xmas Jammies”, I get a lot of questions — and they’re usually very personal. To celebrate our new partnership, the SheKnows Editors lobbed some of the most common Q’s (and a few uncommon ones) my way.

And here we go…

SheKnows: “Is your family really that happy?”

Kim Holderness: I hate to say it but… yes. I know, it’s been called “cringe-worthy” but we are actually very happy. Don’t get me wrong: We fight, the kids whine and we are always forgetting something — but in general we like each other a lot.

I get it how people roll their eyes at us. My parents divorced when I was 21 after years and years of separating and getting back together. As one of my favorite comedians Louis CK says, “no good marriage has ever ended in divorce.” I love my parents. They were trying their best. They are both remarried to wonderful, wonderful people but I did not grow up in a house that had crazy, hilarious dinnertime discussions or even the house where I knew if my parents were together or apart. I would have rolled my eyes at “me” too if I didn’t know any better.

SK: “Do people come up to you on the street and ask you to adopt them?”

KH: People come up to us and say, “You’re so much like our family!” We’ve met so many fantastic people through this process, but no — no one has asked to officially join the family. But hey, there’s always room at our table.

SK: “What is it like to be married to an internet sex symbol?”

KH: I think Penn is super hot, but please don’t tell him he’s a “sex symbol.” I will not be able to handle the ego.

KH: There have been some winners. I think the email wanting to buy our original Christmas Jammies so a family could dress up like us for Halloween was pretty weird. (Why wouldn’t they just order them online?) We graciously declined.

SK: “What was your and Penn’s wedding first-dance song?”

KH: We did a little mash up; the first song was the acoustic version of Colin Hay’s “Overkill.” (When Penn and I first started talking on the phone he would put the phone down and play it on the guitar for me). Then we had everyone come join us for, “Son of a Preacher Man.” (Penn’s father was a minister and performed our wedding).

SK: “What are your go-to dance moves?”

KH: I am very average at the robot and any dance style made popular in the ’80s and ’90s. This average ability, however, does not keep me from a dance floor. Penn and I have some choreography we pull out for weddings and other open bar parties.

SK: “What do you think is Penn’s best dance move?”

KH: Without a doubt, the worm into a back spin. One of the first times we hung out we went dancing with a big group of people. He got on the stage and started breakdancing. I turned to my friend and said, “I’m going to have to marry that guy.”

SK: “Who are your and Penn’s celebrity ‘passes'”?

KH: Like who do I get a free pass to grope if I meet? For me: George Clooney, Taye Diggs, Taylor Kitsch (Tim Riggins from Friday Night Lights). I’m old enough to be his mom so that’s kind of creepy, isn’t it?

For Penn it’s all really gorgeous women who look nothing like me: Salma Hayek, Scarlett Johansson, and Halle Berry. Oh… and Helen Mirren. He’s obsessed with Helen Mirren. For the record: I am too. In fact, I’m adding her to my list.

SK: “At what age do you think your kids are going to start hating you for doing this to them?”

KH: I give it two more weeks. Tops.

SK: “What did you think of the SNL parody? Did they nail it? What would you have added?”

KH: They. Nailed. It. It was perfection.

SK: “How can I also make my family famous internet stars?”

KH: First, buy ridiculous pajamas. Second, dance around like an idiot. Finally, record it and publish it to YouTube.

SK: “What was the toughest part of making “It’s Sunday Night” with SheKnows?”

KH: I was diagnosed with the flu a few days before we were supposed to start shooting. We had the location set, extras booked and about 50 pounds of wings ordered. Everything was set. Everything. But I could not move. I had never actually had the flu before — I seriously thought I would be down for two days then back to work. Nope. I had no idea how evil the flu really is. I was in bed for seven days straight. We had to reschedule the location, find extras who would be available, the whole thing. It was a nightmare.

SK: “Who’s that lady who always shows up in your videos?”

KH: That is my dear friend Jennifer. She plays the role of a “snooty neighbor” but in real life, she’s one of the kindest, most generous and funniest people I know. She’s a stroke survivor and still suffers from bouts of aphasia (when the words simply won’t come out). Our daughters were in the same preschool class and I demanded that she become my friend. She had no choice.

SK: “Would you ever consider doing a parody of Beyonce and Jay Z’s ‘Drunk in Love'”?

KH: So wait… we can drink first, right? As long as Penn is the one in the skimpy swimwear rolling around in the waves — I am down for a parody.

SK: “Have you ever thought about ditching those people and pursuing a solo career?”

SK: “So where do you want to take this thing?”

KH: We have no clue. I know this answer would be better if we had some sort of actual plan for our lives. Our main priority is and always has been our children. Once they are over the family videos we are done. Until then, we are all having a blast.

What people may not know is we spend most of our time behind the camera growing our business, Greenroom Communications. We have an awesome team of video production and digital strategy superheroes who produce amazing work for clients.

Brands and companies come to us looking for something a little… different. We are really good at different.

SK: “Why did you decide to work with SheKnows?”

KH: It was so flattering to get the phone call from SheKnows. I’ve been a loyal reader/subscriber and it seemed like a perfect fit for our family. We’ve been very careful about the brands and companies we partner with — SheKnows was a slam dunk.

The team at SheKnows (the men and the women) are crazy smart and creative — we feel lucky to be included in their conversation.

SK: “What’s the best thing about being a mom? The hardest?”

KH: My favorite moments as a mom are during dinner. I don’t know when it started — but we play 20 Questions. I’m always on a team with Penn Charles and he always gives the answer away. It sounds silly, but I look forward to the hilarious chaos.

Those moments last about five minutes — then it’s all the stuff that makes parenting hard: picking up the avalanche of kid junk, staying on top of the gagillion of pieces of information that come home from school and just trying to not screw up in general. I think the hardest part, for me, is not always having the answers. I feel like there should be a script you’re given at the hospital to help moms answer these following questions from their children:

Why did nobody want to play with me at school today?

Do you think I’m the best dancer in my dance class?

Will you get cancer and die like Aunt Jeannie?

There have been about a thousand more situations where I just go blank. So please, if that script exists, please forward it to me.

More on The Holderness Family