The moment I laid eyes on you, I knew I would never be the same. Seeing you in all of your nude, ruffly pantsuit glory as you hugged Gwyneth Paltrow’s svelte figure on The Tonight Show… well, let’s just say the camel toe has never looked so good.

How does that saying go? “Celebrities, they’re just like us.” Gwyneth Paltrow’s pantsuit, you have proven beyond a shadow of a doubt that the elite, upper-crust and often unfairly hated Gwyneth is just a woman of the people. 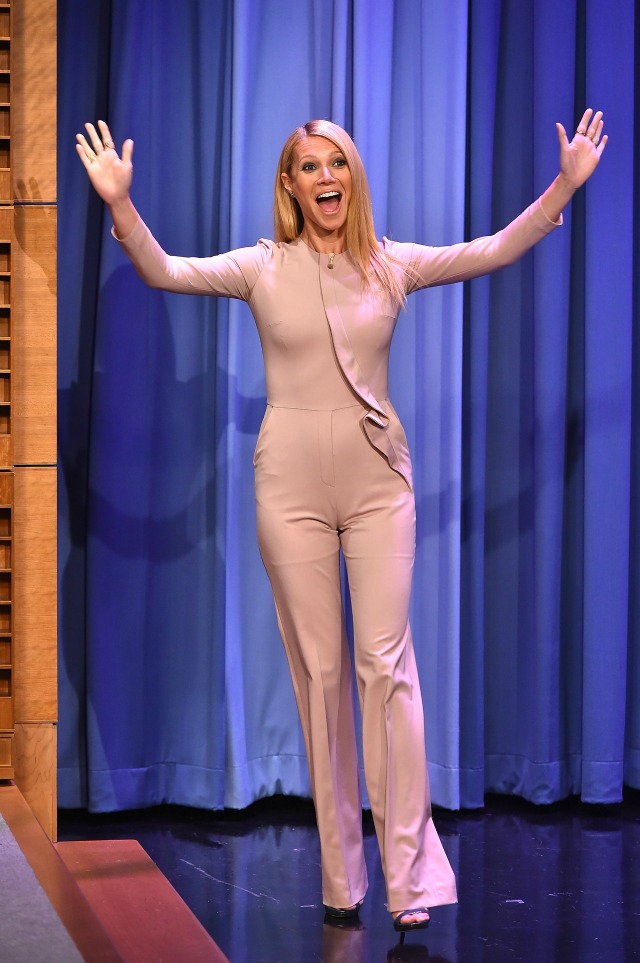 Gwynnie also makes fashion flubs. Gwynnie sometimes goes out of the house looking less than perfect. Gwynnie can even get talked into wearing a nude Jetsons onesie by a stylist who may secretly hate her just a little bit.

Pantsuit, you may be getting a bad rap after Gwyneth wore you to perform a Broadway rap with Jimmy Fallon on The Tonight Show — and yes, that pun was intended. But I think you are being grossly mistreated.

Without you, pantsuit, I would never have been reminded of so-called “coldhearted” Gwyneth’s humanity. And more specifically, I’m talking about a stirring of the unrequited lady love I had for young Gwynnie in the ’90s, when she had a really rad pixie haircut and starred in such amazing films as A Perfect Murder. (This was the Gwynnie who dated Brad and Ben long, long before Angelina and both Jennifers. Give credit where credit is due.)

Nude, frilly pantsuit, the internet is hating on you as a poor representation of Gwyneth’s style, but I think you are a hero. You have brought the consciously uncoupled Gwyneth even closer to her people — the people who have no problem rocking a camel toe and jamming out with their clams out.

Gwyneth wore you on The Tonight Show to promote her new movie Mortdecai with Johnny Depp, in theaters on Jan. 23. But anyone with two eyes can see you stole the show. Your flesh-tone color, your strange ruffle running from trachea to hip, your gentle hugging of Gwynnie’s nearly nonexistent “fupa,” your subtle lift in between the lips of the labia. You, pantsuit, were unforgettable.

Maybe Gwyneth had a temporary bout of insanity when she agreed to wear you, or maybe she’s smarter than all of us realize. Everyone’s talking about you. Everyone can’t stop thinking about you. Just give it a few weeks, and everyone will be wearing nude, ruffly, camel toe jumpsuits without a hint of irony.