Do you read the labels on pet food and treats to make sure they are safe for your pet? If you don’t, Petco has your back when it comes to potentially harmful China-made pet chow.

Petco is the first to pull China-made pet treats

Pet owners have long complained that cat and dog treats imported from China have made their pets sick. Though officials haven’t been able to determine cause and effect, the U.S. Food and Drug Administration (FDA) has issued periodic warnings about it since 2007. In May 2014, the FDA reported that in the previous seven years, it had received more than 4,800 reports of pet illnesses that could have been related to the consumption of chicken, duck or sweet potato jerky treats, nearly all imported from China.

Based on the report and concern for dogs and cats, both Petco and PetSmart committed in May 2014 to removing China-made treats from their stores. However, as of this week, Petco is the first national pet retailer to stop carrying China-made chow on its website and in stores.

The exact reason for illnesses in pets due to China-made pet treats is not yet known, but there are enough complaints and incidences that the FDA is looking into the matter. The FDA has collaborated with the Centers for Disease Control and is investigating China-made pet treats to determine the causes of illnesses and death in dogs and cats that have consumed them. The organization is performing analysis of pet treats, including microbiological, compositional and chemical toxicology testing, as well as evaluation for irradiation. In addition, pet owners are allowing the FDA to perform necropsies on their dear deceased pets for further help in the investigation. 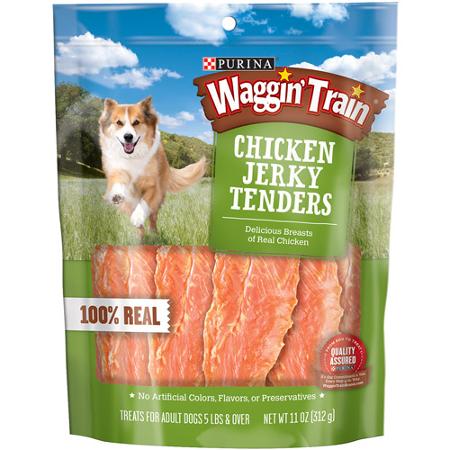 Though Petco has pulled China-made treats and PetSmart is planning to follow suit, many other dog food retailers will still carry treats imported from China. China-made jerky treats are at the top of the list of complaints, but any China-made pet chow may contain ingredients that are harmful to pets.

What products should pet owners avoid?

Before you buy pet treats or pet food, read the labels to see where the products were made. Avoid the products with the “Made in China” label. The pet advocate Facebook group Animal Parents Against Pet Treats and Food Made in China specifically names Purina Waggin’ Train and Canyon Creek Ranch as imported products that have harmed their pets. A substantial list on the group’s Facebook page includes other China-made products, such as Beefeaters, Dogswell, Hartz, VitaLife and SmartBones, just to name a few.

Feed your pets food and treats made in America

The best way to ensure the safety of your pet’s food is to avoid Chinese-made pet food and treats. Opt for domestically produced pet chow. Talk with your veterinarian about the best choices for your pet.

More on pet food and nutrition

Genius (& Easy!) Tricks to Help Parents Tackle Every Home-Organizing S.O.S This Fall, According to Pros