A Florida grandmother lost her home and nearly lost her life on Christmas morning when an SUV careened into the front of her house mere feet from her bedroom.

Dorothy Ussery, 83, and her son were asleep on Christmas morning when an SUV traveling at around 90 miles per hour crashed into the front of their home. Police say the driver was having a medical emergency and struck the house next door before destroying the front of Ussery’s home. Holiday decorations could be seen among the rubble, which included precious belongings that cannot be replaced.

On Christmas Day, the elderly widow was left trying to salvage whatever could be removed safely from her home, where she had been living for the past 46 years. She has no homeowner’s insurance or savings. 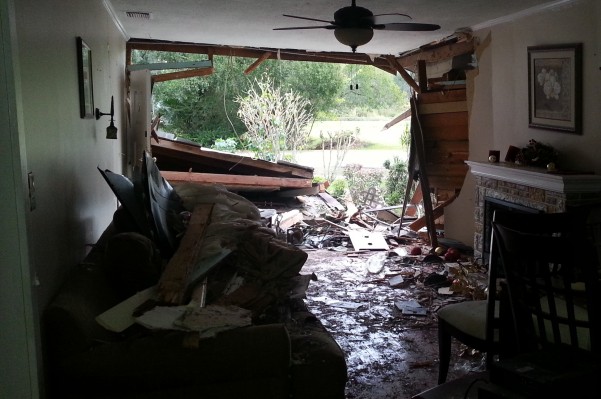 Today, the little house will be completely demolished after county inspectors deemed it unsafe.

Ussery’s daughter has set up a GoFundMe campaign for her mother. It is unknown whether or not Ussery will be able to rebuild on her property, or where she will find shelter after such a tragic accident. Touched by Ussery’s tremendous loss, members of the community have rallied to support her. Though the goal of $140,000 is far from being met, the generosity of those willing to help the elderly widow is truly heartwarming.

Hackers ruin Christmas with Playstation, Xbox attack
Prankster gives homeless man $100 and is shocked by what happens
What it’s like to leave your kids to serve your country