It’s a problem you’ve probably had to deal with if you’ve ever worn a bra: underwires. What good are they? Mostly they’re just uncomfortable — until your bra reaches a certain age, and suddenly the wire decides to escape and hide itself in your tender armpit.

Besides adding another piece of garbage to the local landfill, is there anything you can do with these rogue scraps of metal? I decided to find out.

[Disclaimer: Author is not trained to work with metal. Attempt at your own risk.]

If you have a large underwire — a D-cup or more — then you can try making it into a necklace. Make a small loop at the end of a piece of coloured craft wire, and place it at one end of your underwire so that it sticks out a little. Double-back with the wire, and start wrapping it firmly around both the craft wire loop and the underwire. Then keep wrapping until you get to the other end.

If you run out of craft wire, then you can just use another shade, starting from the unwrapped end of the underwire. This happened to me, which was kind of a relief, as I had no idea how I was going to manage the second wire loop.

Wrapping the underwire with coloured wire can give you hand cramps, so it’ll be a relief to finally be finished. And now you have a piece of jewellery that took a long time to make and is just… really, really ugly. 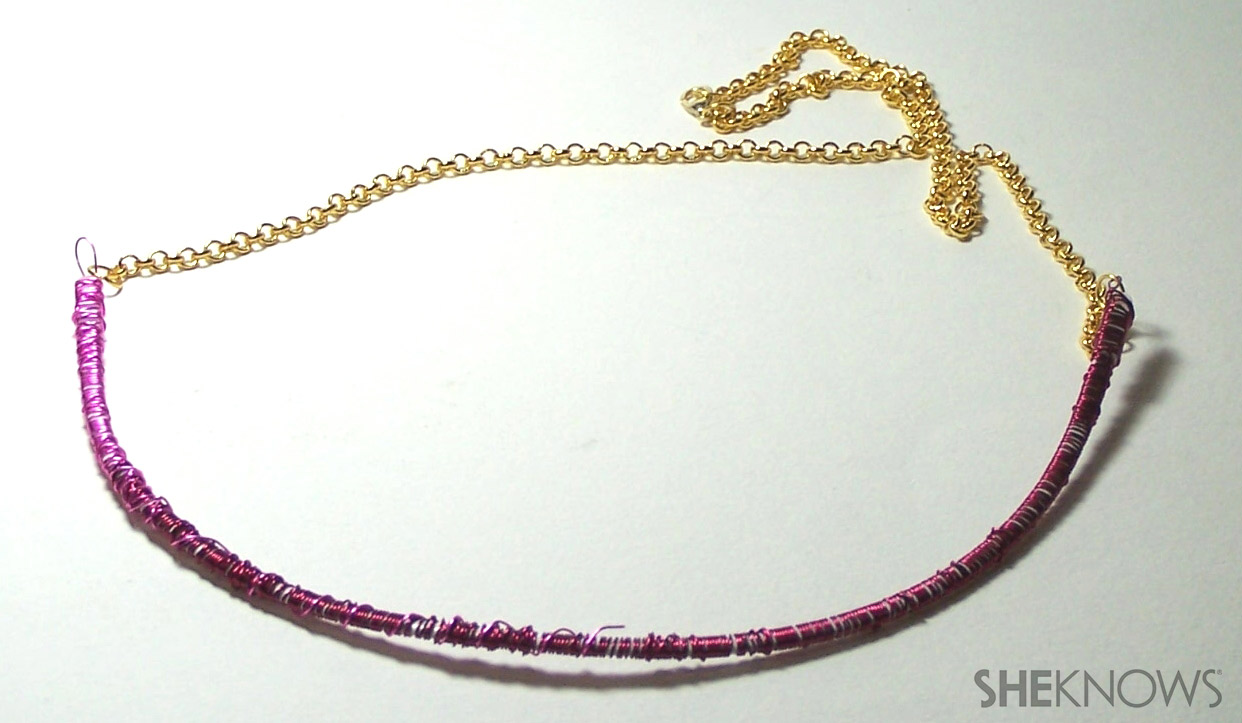 OK, but if you have a smaller wire (B- or C-cup, depending on how thick your wrist is), then you can make a bracelet. You will also need beads with holes big enough to fit over the wire.

Shape the underwire into a semicircle. This is kind of difficult but not impossible. My hands and arms are fairly weak, and I could do it without pliers. Pull the wire down and inward, and keep bending it toward itself.

Use pliers to pull a short bit of underwire at one end into an angle about 90 degrees in the opposite direction of the circle. This will keep the beads from sliding off the bracelet.

String the beads onto the underwire in the pattern you desire, and then use the pliers to angle the last bit of underwire at the end to mirror the one you already bent. 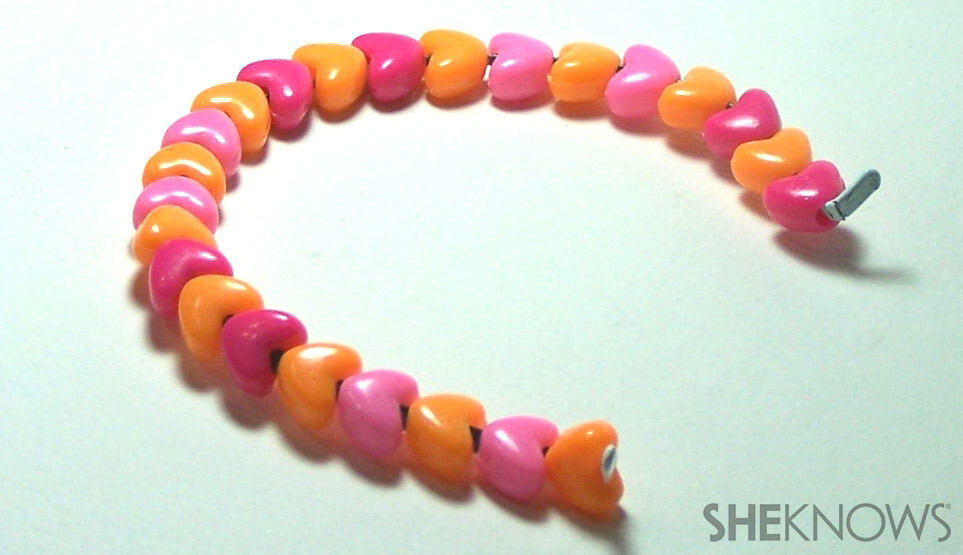 This one is trickier. You’re going to need a white sock. A disposable cup, some shiny paper, a hot glue gun and two underwires formed into circles.

One of the wires is going to be the head, so you may want to spray-paint it a face-type colour. Mine is gold because… I have gold spray paint?

And you may want a smaller wire for the halo. One of the things I found out doing this is that underwires are very hard to cut.

Fold your shiny paper in half, and draw a wing shape on the dull side, against the fold. Cut the wing out along the line. Hot-glue the middle of the shiny side of the wings to the sock-covered cup where you want the angel’s back to be.

Put a blob of hot glue in the centre top of the upside-down cup, and stick your head-underwire in there. You will have to glue down the part of the wire circle where the pieces cross, or the head will fall down.

Then stick on the underwire halo with more hot glue.

Hopefully your attempt will look better than mine… 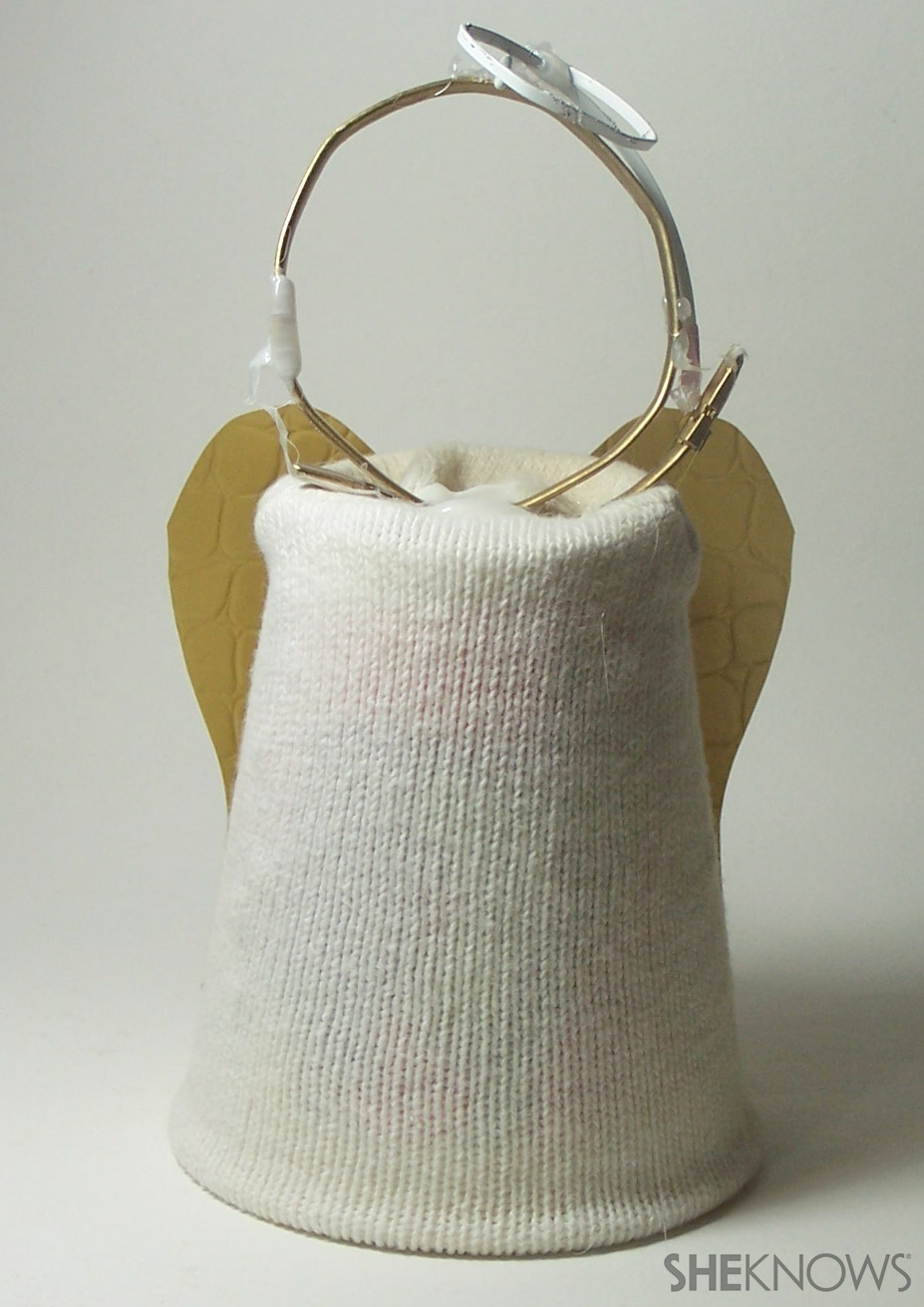 … which looks like someone really likes angels. Likes them right in the ears. Like some kind of freak.

If you can bend an underwire into a circle, then you can probably bend one into a vague heart shape.

Spray-paint your heart-shaped underwire with the colour of your choice. Once that’s dry, either hot-glue or wire the ends together to make the heart complete.

Cut a piece of decorative paper a little bigger than the wire shape, and smear tacky glue on it. (I tried smearing the glue on the wire, but I just wound up having to reglue the whole thing.) Press the paper down onto the wire, making sure you don’t leave any spots where the wire isn’t touching the paper.

Once the glue is dry, cut along the edges of the wire shape, and discard the excess paper. Smear more glue onto any loose spots, and press them back into the wire.

When the next round of glue is dry, you’re ready for the gloss coat.

There are three products you can use for this. Mod Podge has Dimensional Magic, Aleene’s has Jewelry Pendant Gel, and Judikins has Diamond Glaze. They’ll all do about the same thing, though I think Diamond Glaze is the only one that’s waterproof.

So, pour your gloss coat into the wire shape, and swirl it around until all the paper is covered.

Whichever glaze you pick, it’ll take 12 to 24 hours to dry. Once the glaze is fully dry, take the point of a craft knife, and make a hole for your lanyard hook. 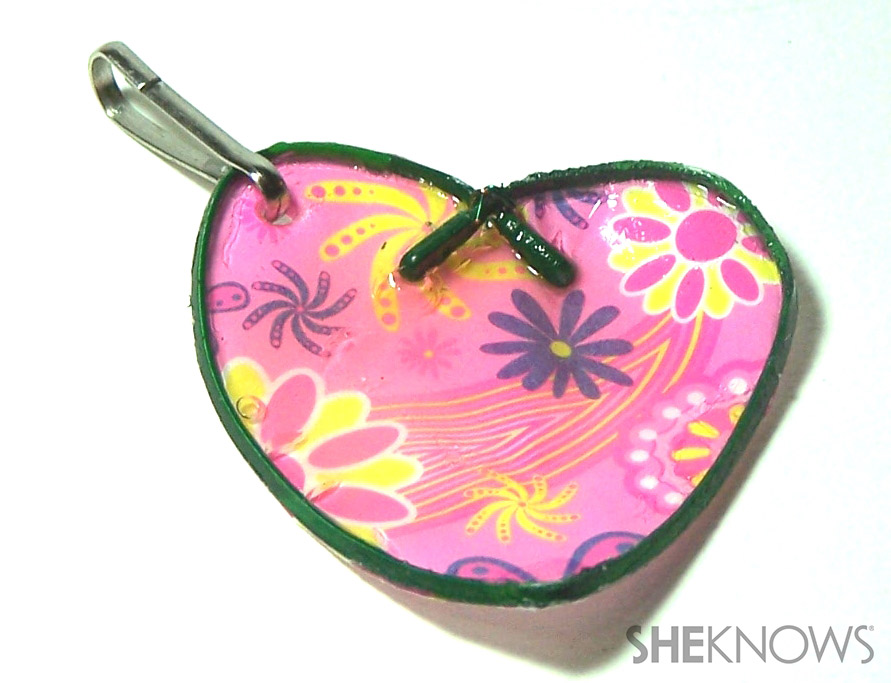 To make this sturdier, you may want to cover the back with glaze as well.

But your keys will probably rip it to shreds anyway.

This one was kinda simple. You sort of fold an underwire in half (bend the two ends of the wire toward each other), and then you find two pieces of wood for the handle (I used two paint-mixing sticks).

Use a strong glue like E6000 or Household Goop to glue the sticks together with the unfolded ends of the bent underwire between them. Clamp this contraption, or put it under weights until the glue is cured.

Then wrap the whole handle in some duct tape, just to be sure. 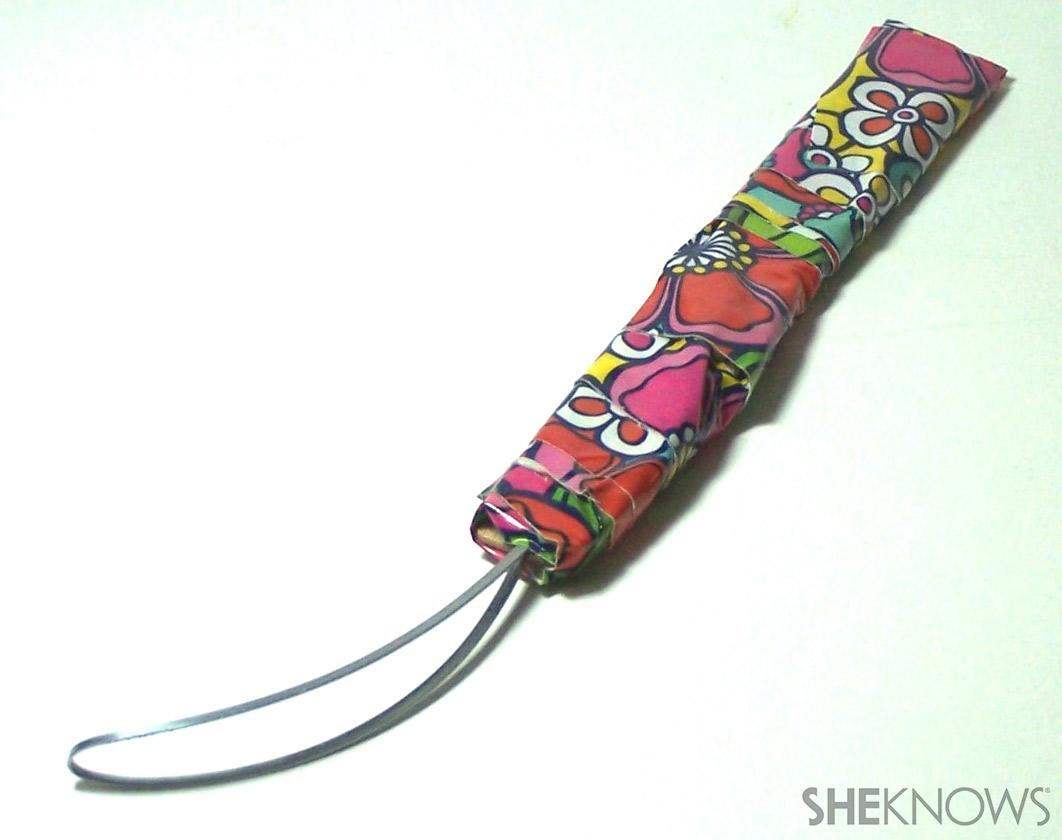 Another thing I found out while working on these projects is that underwires don’t straighten. Not even slightly.

So my hair stick is curved.

Take a smaller underwire (I think this was a B-cup), and smear an end with glue. Wrap the glued part with embroidery floss. Keep gluing and wrapping. You can switch colours if you want. Once the whole thing is wrapped in floss, glue a decoration on one end. This will be the more visible end, obviously.

I used a butterfly decoration from the dollar store. I tried to fasten it to the stick with the attached wire, but the wire immediately came out of it. So I glued the body of the butterfly to the end of the wire with Goop glue. 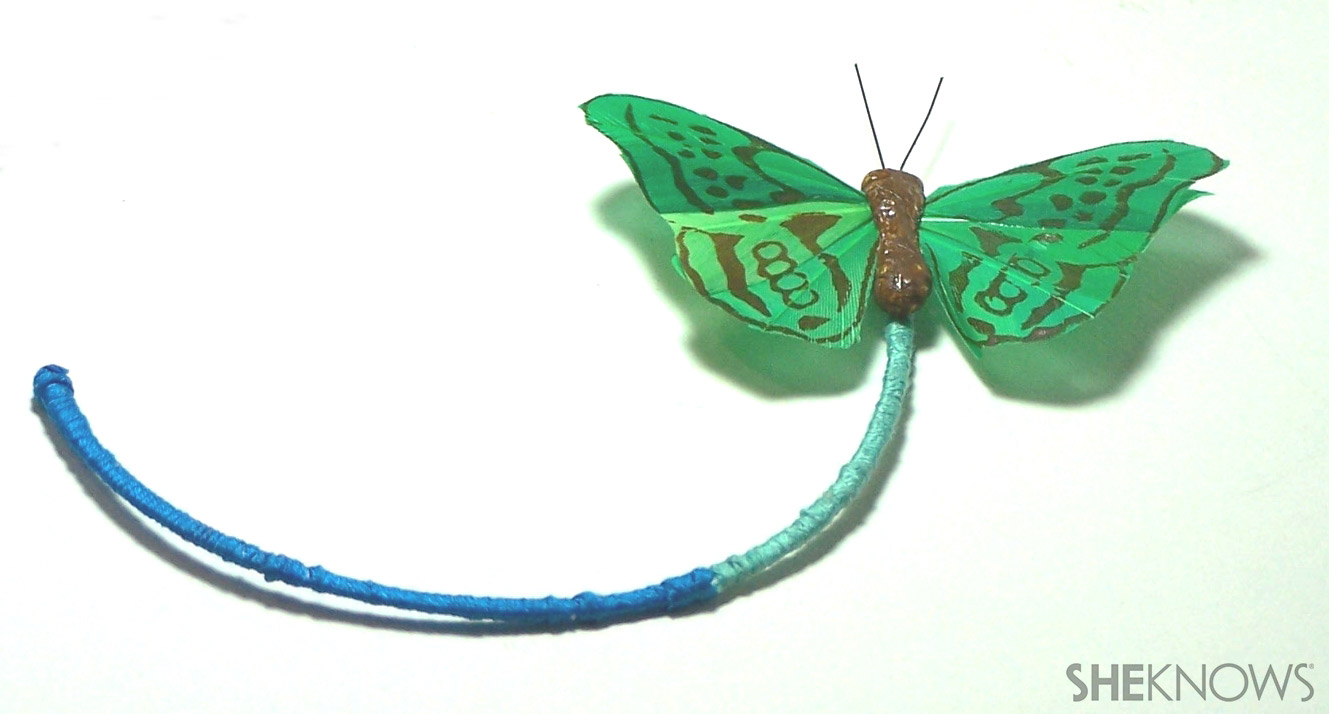 Hopefully you can find a butterfly with a less turd-like body.

So, what can you do with underwires? Lots of goofy s***.

What should you do with underwires?

I have no idea.