Tanis Jex-Blake, Jennifer Livingston, Carleigh O’Connell… These women may not be household names, but you should know who they are. They have put themselves under the spotlight to stand up to body-shaming. 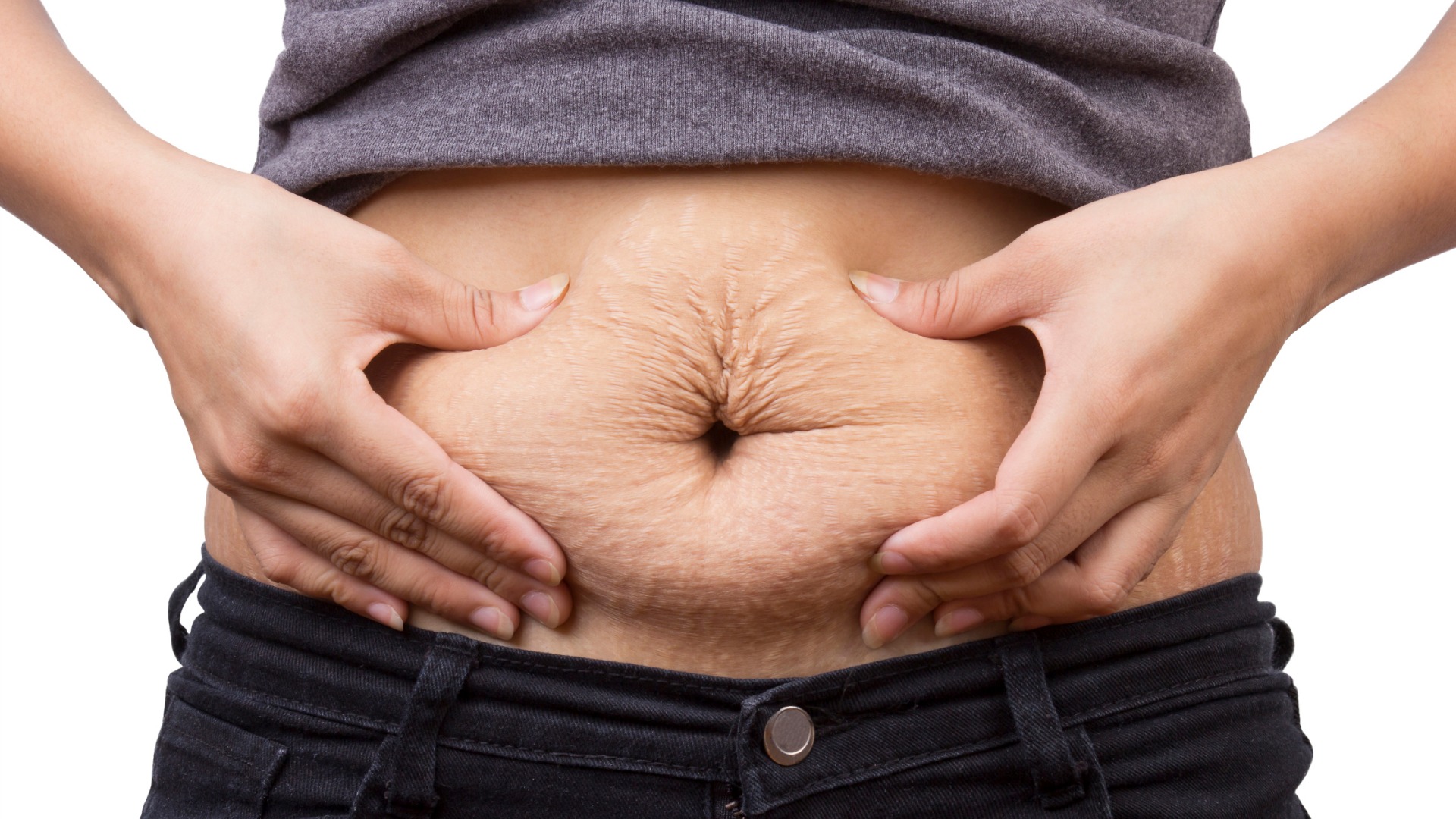 What’s your reaction to this picture? For us, it’s a powerful reminder of what a woman’s body goes through during pregnancy. Another reminder: Women of all shapes and sizes — even skinny minnies — can get stretch marks. In a lot of cases, it’s down to genetics. Extreme weight gain and loss of any kind can cause stretch marks, but most women find they are left with them around the belly area after childbirth.

Just like Tanis Jex-Blake, 33, a Canadian mother of five who was looking forward to a relaxing day with her family at Alberta Beach recently. For the first time since giving birth to her first child 13 years ago, Tanis decided to sunbathe in her bikini. She wasn’t prepared for what happened next:

“All of a sudden I heard, ‘Oh my god, look at that. That’s f***ing nasty. That’s disgusting. Look how gross that is,'” she told Canada’s Global News. “So I peeked my eyes open and [two men and a woman] were standing above me, looking down, pointing at me and pretending to kick me as I lay there.”

Tanis cried all the way home. Then she pulled herself together and wrote a powerful open letter to her taunters on Facebook:

I’m sorry if my first attempt at sun tanning in a bikini in public in 13 years “grossed you out”. I’m sorry that my stomach isn’t flat and tight. I’m sorry that my belly is covered in stretch marks. I’m NOT sorry that my body has housed, grown, protected, birthed and nurtured FIVE fabulous, healthy, intelligent and wonderful human beings. I’m sorry if my 33 year old, 125 lb body offended you so much that you felt that pointing, laughing, and pretending to kick me. But I’ll have you know that as I looked at your ‘perfect’ young bodies, I could only think to myself “what great and amazing feat has YOUR body done?” I’ll also have you know that I held my head high, unflinching as you mocked me, pretending that what you said and did had no effect on me; but I cried in the car on the drive home. Thanks for ruining my day. It’s people like you who make this world an ugly hateful place. I can’t help but feel sorry for the women who will one day bear your children and become “gross” in your eyes as their bodies change during the miraculous process of pregnancy. I can only hope that one day you’ll realize that my battle scars are something to be proud of, not ashamed of.

A few easy steps to reduce the appearance of stretch marks >>

When the post was picked up and shared by Canada’s Hot 107 Edmonton radio station, it received more than 1 million likes and over 200,000 shares.

“I think [my post] struck a chord with so many people because, other than supermodels, nobody’s perfect,” said Tanis. “Every mother, whether they have stretch marks or not, are embarrassed about our bodies because we don’t look like the supermodels. It struck a chord because every other mom out there, it could have been them.”

When a viewer attacked Wisconsin news anchor Jennifer Livingston for her weight in 2012, she responded publicly — and with courage and dignity. The email from Kenneth Krause criticized her weight and accused her of not setting a “suitable example” for young girls and of shirking her “responsibility as a local public personality to present and promote a healthy lifestyle.”

Jennifer’s husband and fellow news anchor Mike Thompson posted the text of the email to the WKBT News 8 This Morning Facebook page, prompting hundreds of people to leave messages of support.

Should Disney have a plus-size princess? >>

A few days later, Jennifer addressed her “bully” live on air, admitting that she was overweight but adding: “To the person who wrote me that letter, do you think I don’t know that? That your cruel words are pointing out something that I don’t see? You don’t know me… so you know nothing about me but what you see on the outside, and I am much more than a number on a scale.”

Jennifer ended her speech by saying, “To all of the children out there who feel lost, who are struggling with your weight, with the colour of your skin, your sexual preference, your disability, even the acne on your face, listen to me right now. Do not let your self-worth be defined by bullies. Learn from my experience — that the cruel words of one are nothing compared to the shouts of many.”

When he was finally tracked down by a news crew, Krause publicly apologized to Jennifer, saying he was “only trying to cast a spotlight on the negative effects of obesity.” He even volunteered to help her get some of the weight off, but she graciously declined his offer.

At only 14, Carleigh O’Connell is an incredible example of how to cope with bullying and turn a negative into a positive. When American teen Carleigh found out somebody had directed unkind graffiti toward her, she vowed not to let it get her down. Instead, she stood proudly on the wall spray-painted with the words “Carleigh’s ass,” and posted the picture to her Instagram account. Her mom later shared it on her own Facebook page, with the following statement:

She decided that she was going to be stronger than hurtful words on the concrete and that she was going to be proud of her figure. She also told me that she feels complete sympathy for the teenagers across the country who face this everyday [sic]. She understands and wants all of them to find strength inside to rise above the nastiness and be empowered by who you are, how you are made and what is in your heart.

Her mom’s post was shared over 16,000 times by people from all over the world, and Carleigh quickly became a talking point in the media, with Today Show and Teen Vogue covering her story. The experience encouraged Carleigh to approach ReachOut.com, which helps young people get through difficult times, tackling topics from bullying and anxiety to unemployment and sexual identity.

In Carleigh’s own words: “Be strong. Be happy with who you are. It’s OK to talk about things that hurt. I know. My experience hurt but I was determined to make a positive out of the negative.”

Since when is skinny-shaming OK?
Learning to love your body
Is your child having body image issues?

20 hrs ago
by Kenzie Mastroe

Hunter Boots Are Back in Stock at Costco