This year, Victoria Day, also known as May two-four in honour of Queen Victoria’s birthday, falls on Monday, May 20. The holiday is typically celebrated with a family- and friend-filled barbecue, followed by evening fireworks. We’ve rounded up the best firework displays across the country.

Related story Who is your favourite Superman? 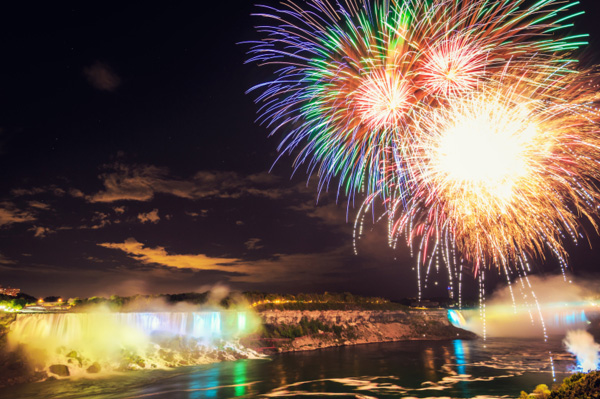 While firework displays might not be as popular on Victoria Day as they are later in the summer on Canada Day, there are some pretty impressive sights from coast to coast you just don’t want to miss.

In British Columbia, fireworks will be set off during the New Westminster Hyack Festival from May 17–26. This 10-day festival celebrates arts and culture, and the fireworks of previous years have been fantastic.

If you ask around about Victoria Day fireworks, many will share that the best of the best can be found in Ontario, from Toronto to Niagara Falls.

Canada’s Wonderland is known for fun in the summer, but it’s also home to one of the biggest Victoria Day firework displays, with an estimated 4,000 lit up in the air. Starting May 19 (weather permitting), Canada’s Wonderland will light up the sky with custom creations and will play music to tie it all together.

On May 18, at the Blue Mountain Village in Collingwood, Ontario, another fantastic firework display is in the works for Victoria Day, with daytime events leading up to the big show, which is to start at approximately 9:30 p.m.

The Township of Tay, a small village part of the Southern Georgian Bay area, will host its annual Portarama Family Festival during Victoria Day weekend. Running from May 16–19, this event will include a spaghetti dinner, a parade complete with marching bands and, of course, an evening display of fireworks.

If you love speed, the Mosport International Raceway will celebrate its annual Victoria Day SpeedFest Weekend from May 17–19. This action-packed event will include the sights and sounds of booming-fast cars and a firework display you won’t want to miss.

Celebrate Victoria Day at Queen Juliana Park in Ottawa. The two-week festival, which will run from May 8–24 and incorporate the popular Tulip Festival, will wrap up its celebration with a breathtaking firework display on Monday, May 20.

Niagara Falls is known for spectacular sights and fun things to do, but it’s also known for having the longest-running firework series annually. It kicks off on Victoria Day weekend and continues until September 1. Every weekend brings spectacular colours to the sky, starting at 10 p.m. Many hotels in the area offer perfect views of the night events, and nothing beats having a street view of this amazing firework display.