If you need a vacation but aren’t sure where to go, we’re here to help. We have the inside scoop on some of this year’s hottest travel destinations for every type of traveller. 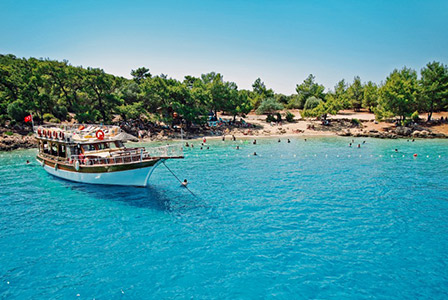 Whether you’re looking for some adventure, some culture or something closer to home, there are several spots worth considering. We asked Amy Graff, travel expert and blogger at On the Go with Amy, about some of the top destinations to add to your travel wish list this year.

This top spot is poised to be a hot destination for business and also for leisure travellers and families, notes Graff. “It’s affordable and offers a variety of attractions, from beaches to cities to some of the world’s best historic ruins,” she explains. You can also expect visitors to become more intrigued with the country as a whole instead of just sticking to a few well-known tourist areas. “Travellers used to just visit Istanbul and maybe hop on a flight to Ephesus, but now they’re renting cars and driving around and exploring.”

Get ready for Brazil to storm onto the world stage, thanks to the 2016 Olympics. “Rio is gearing up for the games, with work crews building more than 10,000 new rooms, transforming the gritty downtown into a sparkling and safe shopping district, and constructing new subway stations,” says Graff. “This big and bustling tropical city, with some of the world’s most beautiful water views, has long been viewed as too exotic and unsafe for the average traveller, but the Olympics is changing that,” she explains. With interest increasing steadily, tourism floodgates are opening up to everyday travellers and families, so now is the time to go, before prices go through the roof and the crowds arrive.

Portland may have been the hot hipster destination for everything from boutique shopping and art galleries to inventive food, but a new must-see city is taking over. “Pittsburgh is now the new Portland,” says Graff. “What’s more, it has a lot of history, a dramatic downtown skyline, interesting architecture, beautiful old homes and leafy streets,” she adds. Pittsburgh is also a great destination for families, with one of the country’s best children’s museums.

Costa Rica was one of the first spots in Central America to see an influx of tourists, and then it was Panama’s turn. Now leisure travellers looking for a Central American adventure are turning to El Salvador and Nicaragua. “El Salvador’s biggest city, San Salvador, is surprisingly sophisticated, with cafes, museums and universities. Nicaragua is known for its lakes and volcanoes,” notes Graff. “Both of these countries are often thought of as war zones, but the wars are long over. Smart travellers know that El Salvador and Nicaragua are two of Central America’s safest countries,” she explains. “Plus you can still travel through these countries on the cheap.”

You’ve likely heard of Puerto Vallarta, but it’s worth looking into this newer must-see spot in Mexico. For West Coast families especially, Graff says this Mexican fishing village with great beaches is turning into a popular tropical getaway. “I’m seeing more inquiries about this destination in online parenting groups, and more and more little hotels are opening up there.” Just 45 minutes north of the Puerto Vallarta airport, Sayulita offers beautiful beaches, lush jungle, ample opportunities for water sports and a look at a more traditional side of Mexican life.

Lord of the Rings certainly spurred an interest in New Zealand, and Graff says we’ll see travel there also pick up with The Hobbit. “Lord of the Rings put New Zealand on the map as a mainstream tourism destination, with some 266,000 people visiting the Hobbiton movie set, and I think we’ll see travel here reach new levels with The Hobbit,” she notes. “The entire movie was filmed on the north and south islands, and soon families will be travelling along New Zealand’s Hobbit Trail — visiting Lake Pukaki, Mount Cook, Fiordland National Park — and returning to Hobbiton.”

Where will you be heading this year?

Walking the Camino: The journey of a lifetime
Hotel health hazards
5 Compact travel items you need