Not all of us want to be out on the town all the time. So when it’s time to just relax with your girlfriends and stay in, why not watch some of these films for some good old-fashioned entertainment?

Related story Recipes for the best girls' night in ever 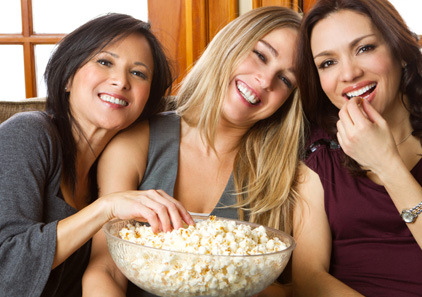 Hey, you know what’s not fun? Being outside in sub-zero temperatures with your girlfriends, that’s what. Unless you and your ladies spend Friday night playing hockey, of course.

But if your pockets are shallow and there’s frost on your windshield, maybe it’s time for a girls’ night in! We’re talking margaritas, hors d’oeuvres, fudge and some super-girlie films, yes? Yes.

In case the old ideas bank is running low, here are some films that we curl up to with the chicas.

This one was just too tough to pass up. The year of 2011 was hit with one of the funniest women-led comedies of all time, one to rival the raunchiness of even the creme de la creme of the comedic world. Kristen Wiig leads as Annie Walker, a maid of honour for her bestie, who, with an eclectic group of bridesmaids, embarks on a series of adventures and misfortunes. We’re talking jealousy, dirty jokes, expressive food poisoning, tantrums, romance, heartbreak and all that other good stuff. This film will have you rolling on the floor with laughter. If you haven’t seen it yet, do so immediately.

Two words: naked men. Just to increase the stakes here, imagine Channing Tatum, Matthew McConaughey and Alex Pettyfer… Naked. That’s pretty much the gist of Magic Mike. It’s a touching story of a male stripper named Mike (Tatum), who works in a club owned by Dallas (McConaughey) and just wants to lead a normal life. What we’re really saying here is… naked men. This film is a legacy of hotness that should be appreciated by all women at least once. Make your next girls’ night in a Magic night.

We’re just standing in front of our readers, asking them to love this film! Hugh Grant as a sappy, romantic yet foolish hero? Check. Julia Roberts as a charismatic, relatable but proud heroine? Check. This movie is just love in the physical form of a film. It’s the old story of a humble bookstore owner (Grant) who falls in love with a famous actress (Roberts) after she stumbles into his store to buy a book. Oh, the tears, the intrigue, the twists, the laughs, the more tears — and the ending! This is a classic. You and your girlfriends will be on a magic carpet ride of sappiness; it’ll be the best!

This is the cheesiest film of all time — pretty much a cheese plate projected onto your television screen. But unless you’re allergic to dairy, you will love this movie anyway. The film is told as a story from one patient to another in a nursing home, where we meet Noah and Allie. The characters are just so madly in love despite obstacles… There’s even a rain scene. It’s actually almost too corny to be legal. Be warned: You will bawl your eyes out! So don’t forget to put out tissues in between them margaritas.

Seriously, drop what you’re doing right now… Drop it! Go and get this movie, watch it and write us a thank-you letter. Ah, the rise of the great internet. Meg Ryan stars as Kathleen, who meets Joe (Tom Hanks) online, and their friendship-romance blossoms. Little do they know that their respectively owned bookshops are business rivals! Dun, dun, dun! Drama ensues. This movie will have you walking down memory lane, reminiscing about the awful ’90s fashion and remembering how cute Tom Hanks used to be. Perfect choice for a ladies’ night.

There you go. Now you’re equipped with the best movies to watch with your besties on a rainy night. Let us know what you thought and which other films should be on the list. Opinionate!