Want to do a little ghost hunting? Then check out these five Alberta locations for a spine-tingling adventure! 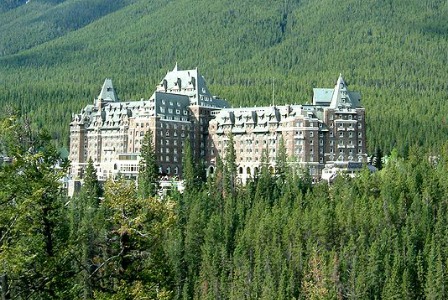 The beautiful stately hotel in the majestic Rocky Mountains is a favourite place for tourists and apparently a favourite haunt of a few ghosts as well! Per Canada.com, there have been alleged sightings of an ill-fated bride who perished when she fell down the stairs on her wedding day and of a former bellhop who apparently doesn’t let death stop him from working! Another tale is of room 873. According to best-banff-vacations.com, it is thought that this missing room was permanently boarded up after a family was killed there, and although the room has virtually disappeared from sight, there are still reports of ghosts roaming nearby!

This ever-changing building, which is now an established restaurant, has a long history and, according to Where.ca, has been the location of a number of undocumented deaths as well as a murder-suicide. It’s often thought of as one of Calgary’s most haunted buildings, as there have been many accounts of rumoured paranormal activity, such as mysterious footsteps, a ghostly apparition of a suicide victim, the scent of a pipe (although no one is smoking), a bloodstain that changes shape and rocking chairs that move on their own!

It would seem that many good ghost stories are based on a grisly murder, and from the reports, the alleged haunting of La Boheme isn’t an exception. It is thought that a husband killed his wife, dragged her down to the basement, then threw her into the furnace. Oh, and according to the legend, he chopped her into pieces first! While there have been reports of hearing strange noises and thuds on the stairs, the Edmonton Sun describes two accounts of a more physical nature. While working in the basement, a staff member felt a mysterious touch, and a guest staying at the hotel recounts his experience with his bed levitating off the ground!

This southern Alberta gem has been a fixture in the town of Fort Macleod for 100 years. While the venue is known for offering a variety of entertainment over the past century, another thing it’s known for is a ghost named Ed. There are a couple of different theories about who Ed could be, as some have speculated the spirit could be the former owner or a previous janitor. Some even believe it could be more than one ghost that does the haunting, but whoever he or they may be, there is apparently a lot of paranormal activity to be found. According to the Empress Theatre website, lights flicker on and off, mysterious footsteps have been heard, and there are even reports of seeing a man’s face in the washroom mirrors!

Previously known as the Cross House, the former residence of prominent Calgarian A.E. Cross, this upscale restaurant has a reputation for offering diners a first-class culinary experience and perhaps the bonus of paranormal activity! There have been a number of reports of strange occurrences, such as the sound of a child’s laughter, sightings of apparitions and, according to avenuecalgary.com, cookware that apparently can move on its own!