Chances are you’ve spent a night or two in a hotel and wondered how clean it truly was. With this guide you can find out exactly what you should be concerned about for your next stay.

Related story Picture It: Miami 2020 — You Set Sail on a Golden Girls Cruise
How clean is your hotel room? 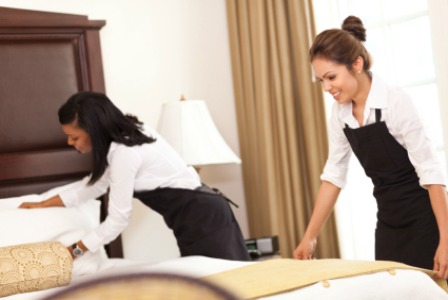 Travelling can be risky health-wise for many individuals. You may have spent time on a plane crammed in with sick individuals, you are likely either jet-lagged or running on less sleep than usual, and you’re in a totally new environment with different health risks. All of this can leave your immune system tired out and make you more prone to illness. So it’s only natural that you want your hotel room to be as sanitary as possible.

Researchers from the University of Houston revealed their findings to the 2012 General Meeting of the American Society for Microbiology after testing 19 surfaces in each of three hotel rooms across three states in the United States. They tested each sample for levels of total aerobic bacteria and coliform (fecal) bacteria, and were surprised by what they found.

Researchers expected to find contaminated samples on the toilet and bathroom sink, which they did. But they were more surprised to discover high levels of bacteria on the TV remotes and bedside lamp switches. Surfaces with the least amount of contamination were the headboard, curtain rods and bathroom door handle.

What was even more concerning to the researchers, however, was the fact that the highest levels of contamination were found in items that were on the housekeepers’ carts, such as sponges and mops. Meaning, some hotels could have a high risk of cross-contamination between rooms.

Where the problem lies

Katie Kirsch, the undergraduate student who presented the study, explained that “housekeeping practices vary across brands and properties, with little or no standardization industry wide. The current validation method for hotel room cleanliness is a visual assessment, which has been shown to be ineffective in measuring levels of sanitation.” Kirsch further explained that the study was preliminary and hopefully just the beginning of research that could lead to a change in hotel health standards.

Researchers clarified that they could not say whether the bacteria would lead to disease, but the contamination levels are a good indication of overall cleanliness of the rooms. So you won’t necessarily get sick by checking in to a hotel, but it certainly wouldn’t hurt to bring along a container of sanitary wipes to clean up the danger zones before you settle in.