On the second day of Montreal Fashion Week, we got the gamut: from the avant-garde to the 1960s. 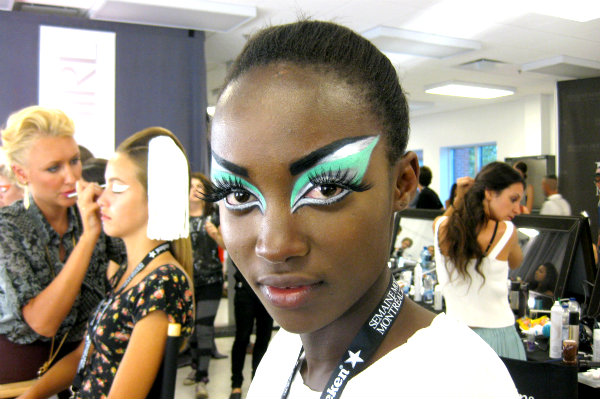 The second night of Montreal Fashion Week was frenetic, with shows from Denis Gagnon, Duy and UNTTLD. And as expected, the makeup and hair we saw that night definitely pushed the envelope. While these might not be something you’d wear on a regular day (if ever), you can always learn a trick or two when it comes to technique. 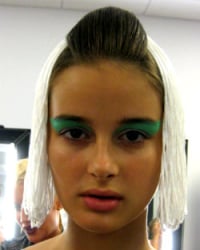 The hair incorporated with a beaded piece that hung over each side of the models’ heads. At the backs of their heads, however, was a sleek, chic ponytail. With one section on top of the head separated from the rest, the hair was pulled into a ponytail and then pinned with two bobby pins. After the beaded hairpiece was applied, Denis Binet, head hairstylist at Montreal Fashion Week, pulled the section on the top of the head overtop the beaded headpiece to cover its top part, and this hair was then added to the existing ponytail. Not an everyday style, but it looked wicked on the runway.

As for the makeup, the look was out there. Some drag queens modelled in the show as well. CoverGirl makeup pro Amelie Ducharme used children’s costume makeup to create a theatrical look, applying bold, bright shades of orange, aqua, white and blue to the eyes, making them pop against the mostly white clothing in the collection. And as if that weren’t already uber-dramatic, she added very long, over-the-top false lashes. 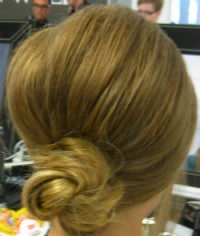 The hair was somewhat inspired by the French Riviera in the ’70s, but it also had a bit of ’60s edge to it, according to Binet.

“The collection is very chic but not old,” he said of the clothing. What kept the hairstyle more youthful? Letting the hair cover the ears.

The key tool he used to create this look was a Mason Pearson brush to help give a smoothness to the chignon. But he recommends not making the hair too perfect — let some pieces fall out naturally to frame the face. 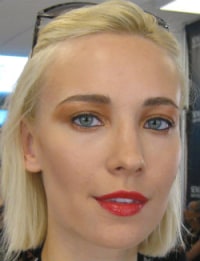 The makeup, on the other hand, took a decidedly more ’80s feel. “Think woman on a beach, going out in the summer in St. Tropez,” said Ducharme.

The one thing we’re always reminded of when talking to beauty pros backstage is to not be afraid to try certain makeup products in other ways. Here, for example, she used a lip product — CoverGirl Blast Flipstick Lipcolor in bronze — as a base all over the eyelid and in the crease, then blended it up to the brow. To emphasize the heavy ’80s-inspired look, she followed it up with CoverGirl Eye Enhancers in shade 700, working it into the brow. 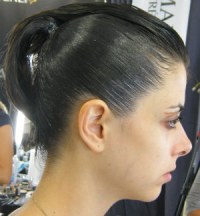 Given the doll-like clothing — with judo-like belts and kimono-inspired pieces — Binet and the designers considered a ponytail high on top of the head, but then reconsidered when this look seemed more samurai than what they wanted. Binet brainstormed with the designers and became inspired to create something more sculptural, something he said was more “Montreal nightlife.”

To create the look, he wet the hair with water, added gel and then formed a high ponytail with some height on the very top of the head. Next, he secured another elastic about three inches from the end of the ponytail and used two bobby pins to secure this against the back of the head. Then he snipped this second elastic so that the hair was secured flat to the head with the bobby pins rather than creating a point with the elastic, he explained. To finish the look, he dabbed on Pantene gel to the sides and on top of the head to give the shiny look of plastic. Sounds like too much trouble? Stick with a high ponytail (and maybe skip the plastic gel look unless you’ve got the avant-garde wardrobe to match!). 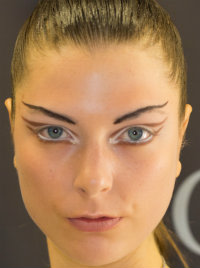 The collection took a cue from Japanese kabuki theatre, so Ducharme made it all about the brows and eyes. To the lashes she applied Simply Ageless concealer “to make the eyes disappear and give the illusion that the eyes began where the lines were drawn in,” she explained.

The brows stole the spotlight here; if you’re brave enough to try it, pencil them in and extend the line at a 45-degree angle “to give a strong expression,” said Ducharme.