Montreal Fashion Week featured some gorgeous looks for spring 2013. Love the funky hair and makeup from Melissa Nepton? Here’s how to get the look. 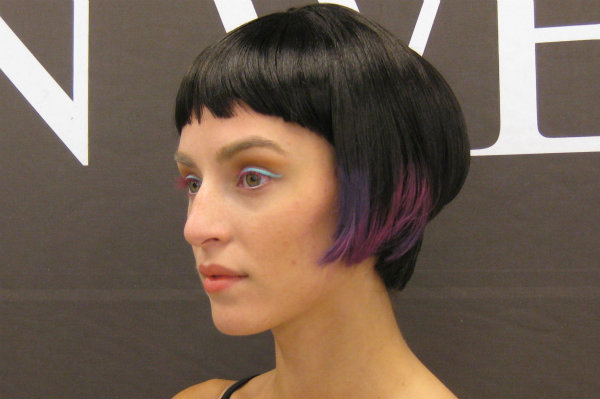 The 23rd edition of Montreal Fashion Week took over the cavernous gallery that is the Arsenal Contemporary Art Complex in the up-and-coming neighbourhood of Griffintown in Montreal. The change of venue created an air of excitement, and though sometimes more stress than excitement was in the air backstage, it didn’t mean gorgeous looks didn’t come down the runway. 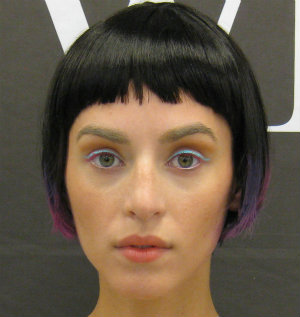 The clothes featured in Melissa Nepton’s show were diaphanous, with lots of blue and white stripes. To complement the collection, the lead makeup artist, CoverGirl makeup pro Amelie Ducharme, created a groovy look that gave a nod to the 1960s. The focus was on the eyes themselves, as even eyebrows were “hidden” by applying concealer to them. Ducharme swept a deep shade of CoverGirl pressed powder (colour 265) into the creases of the eyelids, then added a pop of colour (a pink shade) from a kids’ costume makeup set. She then finished off the eyes by applying some mascara to the lashes.

For the skin, the goal was to create a summery look, so Ducharme used a combination of light and dark CoverGirl Clean Foundation to help contour the face. To finish the look, NatureLuxe Balm in 230 (an orangey, coral shade) was applied to the lips.

All the models wore hairpieces. “The designer wanted all of the models to look the same,” explained Denis Binet, lead hairstylist at MFW. The square, short cut with bangs is a look not many women wear, as “it can be hard cut to decide to do,” said Binet of the short style. The models’ natural hair gathered underneath the wigs helped to create a pronounced lift in the back. For an additional pop of groovy colour, shades of Kevin Murphy’s Color.Bug were applied to the front ends.