Ever wonder what the Canadian athletes of London 2012 do when they’re not training? Here’s your chance to find out where they live and how they spend their free time. 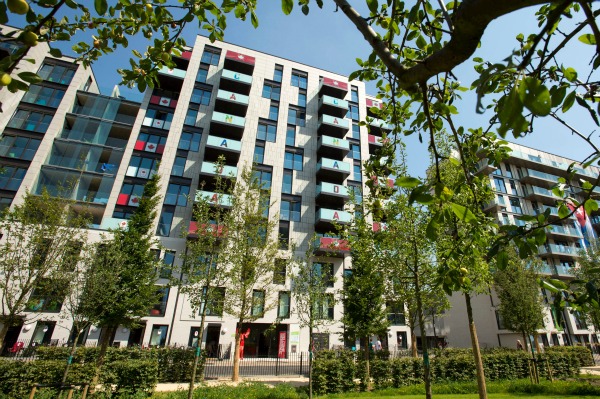 With the 2012 London Summer Games’ opening ceremony happening today, what better way to get into that cheering spirit than clawing your way into the day-to-day lives of your favourite athletes?

Team Canada moved into its London Olympic residence just this Wednesday to the ever-nationalistic accompaniment of “O Canada” and even a flag-raising.

Quick fun fact: We have one of the largest teams in the Games, with 277 athletes proudly parading around in red and white — loads of cheering opportunity.

So where are our proud Canuck athletes staying?

At the Athletes’ Village, of course! This Olympic Village is located within the Olympic Park in London and is a home away from home for the athletes as well as officials.

The Village is equipped with residential apartments capable of housing 17,000 athletes — 277 of which you’re obligated to cheer for. The residential blocks are built around courtyards and all sorts of fancy water features. 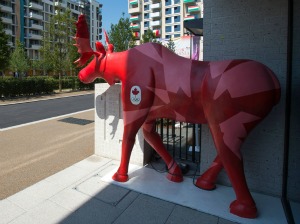 Team Canada’s building is not only decked out with our symbolic Maple Leaf, but is also guarded by a trusty giant red moose. The honkin’ moose statue in front of the Canuck residence has become somewhat of a Summer Games attraction and fills our athletes with immeasurable pride.

“It’s the talk of the town,” said Mark Tewksbury, Team Canada’s chef de mission. “It just gives people a smile. It’s really Canadian, really unique, and helps us stand out as a team.”

Believe it or not, this is the same moose that represented Team Canada in the Vancouver Winter Games two years ago. Back then he went by the name Swagger.

“The moose is a Canadian icon guarding Canada’s Olympic village house and the gold,” stated Jessica Phoenix, Canuck member of the equestrian team. 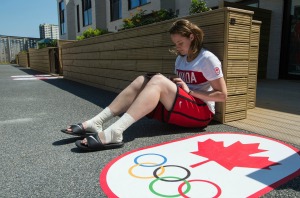 But just because our athletes are in it to win does not mean they’re not people too. During their downtime, our Canadian folks have access to numerous shops, restaurants, leisure facilities and parks — all within the Olympic Village.

So, like normal people, our athletes can grab a coffee with friends, throw a Frisbee around or just bask in the sun with a book. It’s summer, after all.

There ye have it. Now you have better insight into the lives of the athletes representing Canada and hopefully have grown even more attached to them. Don’t worry, they’ll knock your socks off in London. I mean, c’mon, we have a moose on our side!