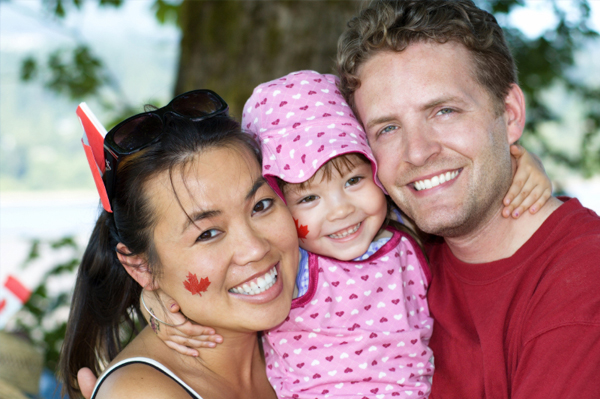 Celebrating is an all-day affair at Vancouver’s Canada Place, which includes live musical performances, a Canadian art display, and exhibits and personnel from the Canadian army, navy, and air force. Visitors can tour the Northwest Territories dome, play street hockey, take in the lumberjack show, feast on Canadian cuisine, watch the ceremony for new Canadians to be sworn in or even participate in the Canadian citizenship reaffirmation ceremony. Harbour Green Park is all set up for the kiddies with face painting, a water park and activities. The annual Canada Day Parade kicks off beginning at 7:00 p.m., followed by the exciting Sail of Lights in the harbour and finally the Canada Day Burrard Inlet Fireworks display. Wow!

The celebration at Optimist Park in Niagara Falls kicks off with a Canada Day parade beginning at 10:00 a.m. Throughout the day, live musical performances and community demonstrations reign, including children’s performers, Bananigans, Russian acrobats, cheerleaders, the Niagara Idol winner, a magic act, a concert band and even Zumba! Free birthday cake is offered at noon, and also to enjoy is a car show, military vehicles, inflatables, a carnival, a show by Reptile Kingdom, the Niagara Food Festival and Tom Bishop’s 4B Ranch Wild West Show. Later, watch the amazing illumination of and fireworks display over the falls. Whew!

Some say the nation’s capital is the place to be on Canada Day. The festivities run from morning until night, beginning with the flag raising and changing of the guard ceremonies. The televised Canada Day Noon Show features an inspection of the guard and a 21-gun salute, followed by speeches and performances on the main stage. Several Ottawa museums offer special activities on Canada Day, the Canada Day Art Festival is on and strolling buskers and drummers entertain on Parliament Hill in the afternoon. The Canada Day Evening Show, also televised, features Canadian performers taking to the stage, ending with a spectacular fireworks display over the Parliament Buildings!

The Halifax/Dartmouth area has Canada Day activities running all day long, beginning with a flag raising ceremony and pancake breakfast in Dartmouth, starting at 8:00 a.m. The Royal Nova Scotia International Tattoo Parade gets under way mid-morning, the Official Canada Day Ceremony follows at the Citadel, and then the Family Fun Fest by May Family Farms kicks off at noon. There is a free jazz concert at Sullivan’s Pond and another in the Public Gardens during the afternoon. The party really starts later, however, with the big Molson Canadian Canada Day Concert, which runs from 4:00 p.m. until midnight, and the Official Canada Day Fireworks at the waterfront that night. Awesome!