If you need a reason to take time for a weekend getaway, a long weekend such as Victoria Day is surely a good excuse! Rediscover Canada by visiting a provincial or national park this May long weekend —
or anytime, for that matter! 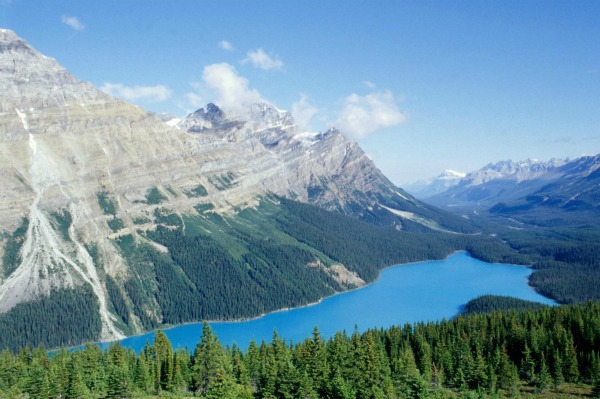 Ah… a long weekend! A spring or summer weekend is perfect on its own, but what if you add an extra day to chill and take a break? Simply sublime! With the May long weekend around the corner, how are you going to celebrate? Whether it’s this long weekend or any other, consider taking time to revel in your Canadian heritage by visiting a local park. Here is just a small sampling of the incredible parks to visit.

Set in the majestic Rocky Mountains of Alberta and just a short jaunt out of Calgary, this park encompasses 6,641 square kilometres of awe-inspiring scenery and nature. The region is known for glaciers, dense forests, an abundance of wildlife as well as the town of Banff itself, which is widely considered a must-see Canadian tourist destination.

Take a trip back to the prehistoric era with a visit to Dinosaur Provincial Park. Set in the badlands of southern Alberta, this park boasts beautiful scenery and undisturbed nature as well as being one of the richest areas of dinosaur remains in the the world! Camping and informational tours are available.

This park, located in the southeastern part of B.C., is a perfect weekend camping destination. It has four campgrounds with over 400 campsites, and the list of outdoor activities to pursue is seemingly endless. Take part in everything from backpacking to swimming, or just enjoy the scenery. Be sure to take a dip in the world-famous Radium Hot Springs!

Located two hours out of Toronto, the Georgian Bay Islands National Park is a smaller park by national standards and is unique, as it’s part of the largest group of freshwater islands in the world! Getting around is by boat only, but water taxis are available as well as the park’s flagship vessel, the Day Tripper, which operates from Victoria Day through October. Take advantage of cabin rentals or equipped campsites.

Cape Breton Highlands National Park was the first national park in the Atlantic region. Surrounded by water, this park is known for spectacular mountain and ocean views from its many viewpoints as well as hiking trails. The park is also home to part of the world-famous Cabot Trail, a stretch of roadway commonly considered one of Canada’s most scenic drives.

Prince Albert National Park is one of only two national parks in Saskatchewan, but is home to the popular Lake Waskesiu. Centrally located in Saskatchewan within a two-hour drive of Saskatoon, this go-to park has it all, from picnic sites to water activities and so much more, all set within peaceful, scenic surroundings.