On day two of The ShOws, Jean Pierre Braganza showed his collection, and we headed backstage to learn how to get the stunning hair and makeup look from the Cover Girl and Pantene pros. 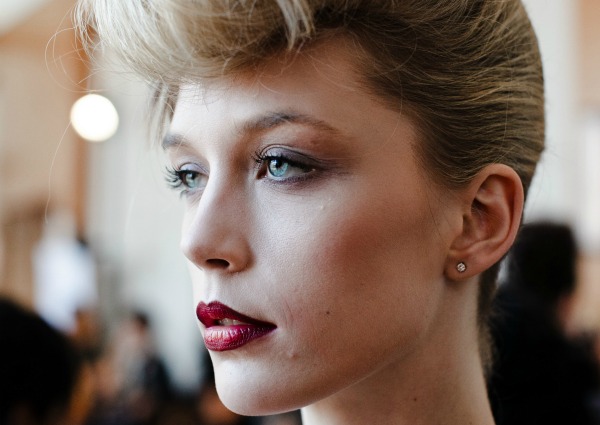 Going with a look very close to the makeup the designer had on the models when he showed internationally, the feature that stood out most to us was the unique ombre lip that Cover Girl makeup pro Greg Wencel created. 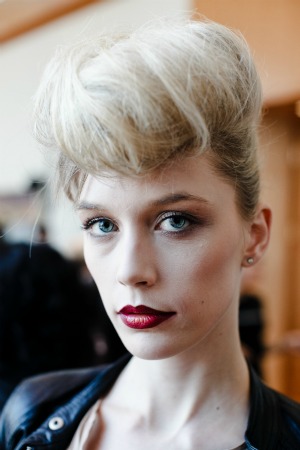 To get this look, you have to create depth on the outside, so Wencel started with a deep red lipliner (Lip Perfection Lipliner in Smolder) and then layered a berry lipstick, Color Sensational in Berry, overtop, creating a gradation of colour. Wencel then took a bit of the gold eyeshadow from the Dazzling Metallics eyeshadow palette and crushed it with a bit of water, then applied it to the centre of the bottom lip, allowing it to bleed on its own to creating a tie-dye effect. “It’s not wearable, very much a runway statement,” he says, but notes that you can get a similar look using the Cover Girl Blast Flipsticks.

On the eyes, he used a cool grey-brown wash of colour to creat a sunken eye socket look. He used only Intense Shadow Blast in Beige Bling, which he likes because “it has a bit of reflection to it, but it’s not too metallic and it’s not messy like a powder eyeshadow.”

Then to give the skin a humid look, he highlighted the model’s complexion by mixing Intense Shadow Blast in Beige Blaze with Simply Ageless Primer and applying all over the skin. 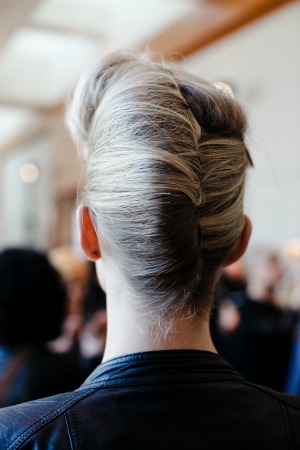 For the hair, Pantene stylist Justin German fashioned a messed-up pompadour, comparing it to Ivana Trump, “but gone right,” he says with a laugh. Working Pantene mousse into the hair to give it some body and hold to make it easier to work with, he twisted it into an old-school French roll, but one that moves all the height to the front, while using Pantene hairspray for fine hair as the look came together. “It’s very much an old-school set,” says German, but it moves the focus to the front. As a finishing touch, a slightly angled fringe hairpiece (with the strands on the outside corner slightly longer) was added to the front, in a shade contrasting the model’s own. German compares the fringe look to being reminiscent of a feather.

Montreal Fashion Week: The look at Melissa Nepton
The sock bun made simple
Hair and makeup with an Old-Hollywood twist