On day one of The ShOws, Ruffian held its first catwalk show in Canada, and the hair and makeup was inspired by the gangster chic collection. Here’s how to get the look.

Stylistas in Toronto were buzzing about Ruffian’s first show ever in Canada at The ShOws. We headed backstage to get the breakdown from the Cover Girl and Pantene pros as to how to get the beauty look. 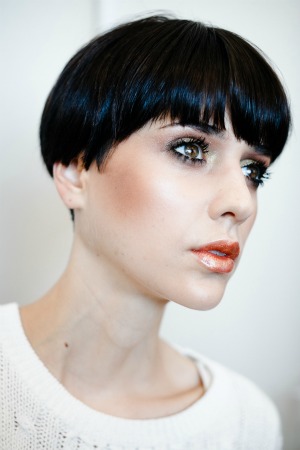 The makeup for Ruffian’s show took inspiration from the gangster chic collection (which had nods to both the 1920s and the 1970s). The designers wanted a “gold rush”-inspired look, and so with this in mind, Cover Girl makeup artist Greg Wencel created a face that was both “old-school mobsters and disco doll — glamourous, like Bianca Jagger,” he says.

The eyes are the big focus of this look. Using the colours of the Cover Girl Dazzling Metallics eyeshadow palette, butterscotches, caramels and yellow golds are blended on the lid in a very round shape, “to create a doll-like look,” says Wencel, adding a dark shade to the corner. He then used Liquiline Blast in Brown Blaze — a deep, dark brown — to line the eyes. He left the waterline clear, however, so as to create more contrast with the lashes. Then several coats of Lash Perfection mascara was applied. Wencel dotted product at the base of the lashes, “to make the lashes thick to thin and really spikey, spidery like in the ’70s,” he says.

On the cheeks, he “overly contoured” — there’s almost that dramatic stripe of blush on the cheeks like in the ’70s — using Cheekers Bronzer.

To complete the look, on the lips Wencel went with a metallic, applying Cover Girl Blast Flipstick in Minx and then topping it with some clear gloss. 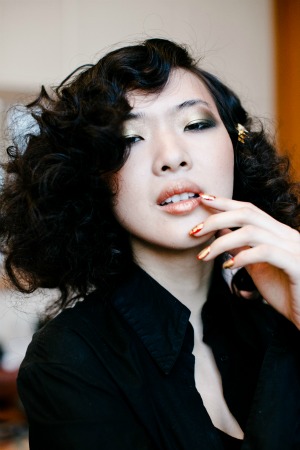 The hair and nails

This being its first show in Canada, Ruffian gave a nod to a “Canadian red” on the nails. The team from Tips Nail Bar applied China Glaze in Scarlet and then layered gold leaf over top.

For the hair, this labour-intensive look was acheived using a small-barrel curling iron and Pantene hairspray for fine hair. Pantene stylist Justin German first created a headful of small curls and pinned them to the scalp to allow them to set. Then he brushed out the curls and rolled up and pinned the hair at the nape to create a faux bob. With the hair brushed out and pinned under, the resulting look is a little bit Mae West and a little Bonnie and Clyde, but with a more modern, disheveled twist.

Try a playful look inspired by the Telio runway
Hair and makeup with an Old-Hollywood twist
Get that chic, Parisian look