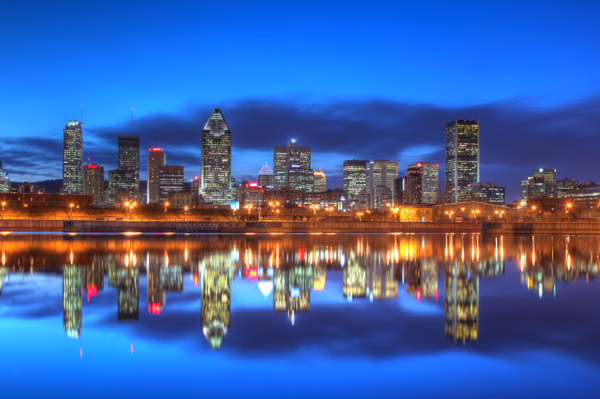 French is the official language in Montreal, the first language spoken at home by more than 65 percent of the nearly 2 million residents of the city’s metropolitan area. That makes it second only to Paris as the largest French-speaking city in the western world. There are 50 National Historic Sites of Canada in Montreal, more than any other city in the country. In Old Montreal, many historic buildings remain in their original form, including Notre-Dame de Montreal Basilica, Bonsecours Market, and the impressive nineteenth-century Canadian bank buildings on the Rue Saint Jacques. The architecture and cobbled streets in Old Montreal have been maintained or restored and are frequented by horse-drawn carriages that delight visitors to the area. The riverside area, called Old Port, is today a beautiful recreational area maintained by Parks Canada.

During the summer months, Montreal is well-known for cultural and social events, particularly festivals. The largest is the Just for Laughs Comedy Festival, but the city also plays host to the Montreal International Jazz Festival, Montreal World Film Festival, Les Franco Folies de Montreal, Nuits d’Afrique, Pop Montreal and the family-favourite, Montreal Fireworks Festival. There’s so much family fun to be found at these celebrations in the vibrant and animated downtown.

One of Montreal’s largest greenspaces is Parc du Mont-Royal overlooking the city. An excellent family destination, the park features a semicircular plaza with a chalet, a man-made lake, a short ski slope, a sculpture garden and an interpretive centre. The park frequently hosts athletic and cultural activities. Located near Olympic Park, the Jardin Botanique Montreal is an enchanting place to wander — a huge botanical garden containing over 20,000 different plant species in 31 specialized gardens.

Housed in the former stadium used in the 1976 Olympics, Biodôme de Montreal consists of four different ecological habitats — rainforest, polar, marine and forest — where you can see the plants and animals native to each ecosystem. The polar penguins and puffins and the tropical monkeys and parrots enthrall children of all ages. It’s educational, but so interesting that the kids don’t realize how much they are learning!

Exporail, the Canadian Railway Museum, is fun for history buffs, train spotters and kids. This unique museum is home to more than 150 locomotives, cars and railway vehicles.

Montreal families are supportive of their sports teams, and attendance at games is high. The most popular sport is hockey, and the city’s professional team is the Montreal Canadiens, who can boast an NHL-record 24 Stanley Cup Championships. CFL and Major League Soccer games also have good attendance at their home games.

Place des Arts is Montreal’s top performance hall and features many family-appropriate presentations of theatre and music. The Segel Centre for Performing Arts showcases professional artists from a worldwide talent pool, and has programs that are geared to nurturing the artistic development of Montreal’s youth. L’Ochestre Symphonique, Montreal’s symphony ochestra, offers family nights and special performances for children at various times throughout the year.