Some people do great with games that let them make use of their near-photographic memory, while others excel when it comes to being artistic. But if you’re someone who loves to talk and appreciates a good laugh, then these games are just for you. 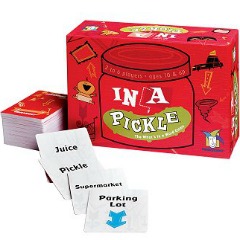 The hilarious game of trying to name which thing goes into which. Each person begins with five word cards, each naming an object. Then, four more object-word cards are placed on the table. The words could be anything — jam, blimp, encyclopedia, etc. Players take turns placing the cards in their hands onto the ones on the table, trying to be the first one to get rid of their whole hand. Where the game becomes extra fun, creative and free-thinking is how players justify their placements. For instance, a house might not be able to physically fit into a dictionary, but the word house is in fact “in” the dictionary, so in that sense it could work. By the end, it becomes more about making your case than the actual logistics of the situation. So regardless of the cards you are dealt, if you can talk your way through it, you are sure to be a winner! 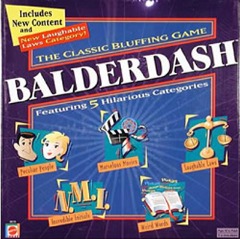 The game of crazy definitions. One person draws a word-and-definition card from the deck and reads the word aloud. The reader writes the correct definition of the word on a piece of paper, while the rest of the players, on their own papers, write their own definition: an accurate one if they know the meaning of the word, an invented one that sounds convincing if they don’t (which is the more common situation). The first player reads all the definitions aloud and everyone votes on which definition they think is correct. Players get points and get to move around the board if they guess the correct definition or if their own definition is voted correct. Balderdash lets you be wildly creative with your words and stimulates some great conversation. 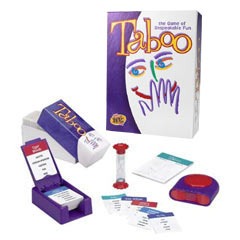 No doubt, one of the most hilarious and entertaining games out there, regardless of your skill level. In teams of two or more you take turns with a deck of cards, each with a word at the top of it. Below each word are the “taboos” — five things you are not allowed to say as you try to get your teammates to guess the word. If you do, the other team hits the buzzer and you forfeit the point. So, for example, the word to guess might be Brangelina, but you can’t say Jennifer Aniston, Billy Bob Thornton, movie, couple or Hollywood. So you have to be strategic, clever and quick. It becomes even more fun when you have to rely on your relationships with your teammates more than the actual word itself. For example: “We saw The Break Up last week and I said how sad it was that in her real life the star has been left by her husband so he could form this uniquely named pairing.” It’s fast-paced, fun and absolutely hilarious!