When chipped, worn or old ceramic tiles need replacing on the kitchen backsplash or the bathroom’s shower or tub enclosure; there are a number of economical ways to replace, repair or redecorate without spending a fortune. 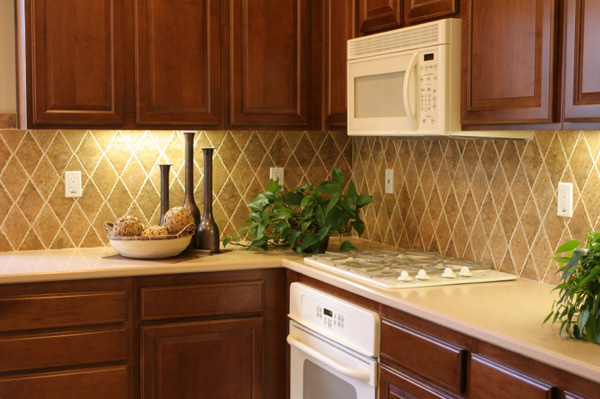 According to Ellie Cholette of At Home Interiors, creatively covering over existing tiles makes for much less work than taking off the old and putting up expensive new ceramics.

“You can hide your kitchen backsplash by simply applying a primer and gluing on mirror tiles, corkboard or deco board — a paintable patterned plastic that looks good in country kitchens. For the bathroom try gluing vinyl peel and stick floor tiles using extra glue. It is totally washable and serviceable and will last at least five years,” states Cholette.

If you are planning to replace your tiles with a whole new set of ceramic, but your budget won’t allow for it now, Cholette suggests gluing a dozen or so decorative tiles over top tiles that really need replacing. These tiles will protrude out of the wall adding texture.

Cholette says to extend the life of your ceramic tiles for approximately two more years –paint them. “I take thin painters’ tape and put it where the grout is. If you apply a super primer on top of the tiles, then you can apply any type of paint or technique such as dry brushing or mixing glaze with paint. Other ways to decorate your tiles are sticking on decals or using a magic marker made for china, to script or draw,” explains Cholette.

Cholette, has appeared on Canadian decorating television shows. On one particular show, she ripped tiles off a backsplash — replacing it with drywall compound. She then sanded, primed and applied silver metallic paint for a result that delighted the homeowners.

Tips: Decorating with baskets
10 Cheap ways to perk up your home

How to update your bathroom fixtures