Driving during storms or on wet/snowy roads can seem scary — but there are many common-sense ways to make car travel on slick or flooded roads safer. Here are some tips to help you make it out of a flooded or sinking car. 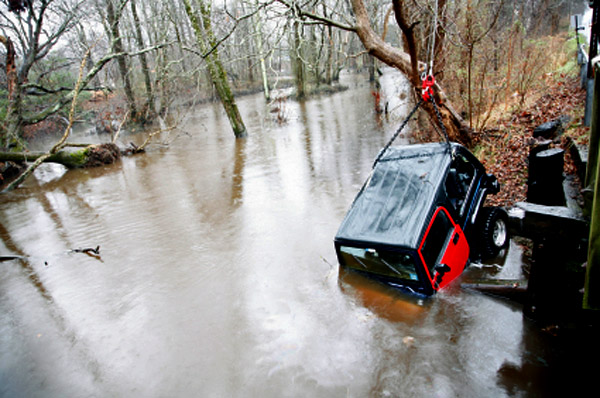 In winter, it’s not just the few well-known accident-prone roads you need to watch for — such as this route along Spray Lakes Reservoir in Calgary — but the everyday streets you travel, too.

Every year, thousands of people put themselves in a risky position by driving on to flooded roadways. Even as little as 16 cm of water can reach the bottom of most passenger cars, possibly causing stalling (by taking in water via the exhaust or air intake). Less than a meter of rushing water — easily produced by a storm surge — can have enough strength to carry away most vehicles, including 4x4s and sport utility vehicles.

If you have limited options, try to drive in the middle of the road, and be patient: pass through any flooded sections one vehicle at a time.

British Columbia’s Provincial Emergency Program says that if a car stalls in floodwater, you should get out quickly and move to higher ground.

Then, if your car is going under water with you still inside, it’s most important to keep your wits about you. You need to save your strength and mental stamina for escape, and panic uses a great deal of energy. Take deep, calm breaths and think methodically. For example, unlock the doors and try to roll down the window, and don’t forget to take off your seatbelt before you attempt to swim through the window.

3. KEEP YOUR HEAD ABOVE WATER

If you’ve landed in water a couple meters deep (or of unknown depth), to keep your head above the water line, you might need to go into the back seat — the front of the car will likely sink first due to the weight of the engine. (Of course, if you have a vehicle with the engine in the back — such as a Porsche — that advice won’t apply.)

Unless the car has been severely damaged, you usually have more time to escape than you think — at least a few minutes. That’s because a car battery does not short out the moment you hit the water, as often seen on TV. A car battery typically takes several minutes to stop working, which means you may still be able to roll down the window or open the sunroof using the electronic buttons.

5. WAIT FOR SOME WATER

If you’re going to have to break out of a submerged vehicle, wait for the car or truck to fill with some water. There needs to be fairly equal pressurization in order to open a door or window, otherwise the force against the doors will make them impossible to open. Consider waiting until the water comes about up to your mid-chest and take a deep breath — you’ll be swimming out.

6. USE THE RIGHT TOOLS

If your car is sinking or flooded, don’t waste your time trying to break the window with anything except a centerpunch, hammer or screwdriver. Kicking — even with steel-toed boots — and using multi-tools often won’t help much because of the special safety glass installed in windows.

If you don’t keep a tool in the car especially for this purpose, just try using something sharp — nothing blunt will do the job, and you will simply expend too much energy. (Keep a tool similar to the Life Hammer — shown above — in your vehicle, which is specifically designed to break car windows easily, as well as to cut through seatbelts.) Other emergency supplies to carry with you can be found here.

Even when the car is full of water, don’t bother trying to smash the windshield — it’s laminated and, by design, is incredibly tough to break (even though little pebbles can crack it at highway speeds). Try breaking the side windows instead, and aim to hit them in one of the upper corners.

7. DON’T PHONE FOR HELP UNTIL YOU’RE OUT

If your car is sinking, you don’t have time to wait for a rescue. Assume that you’re on your own for the time being… and if help arrives, great.

Remember that opening or breaking a window or sunroof may well be key to your survival, and the number one objective is to get you and your passengers to safety. Forget your handbag, your computer, your shopping — just get out and go.

This should go without saying, but you can’t get yourself out of a sinking car if you’ve been knocked unconscious because you weren’t wearing your safety belt in the first place!