The love for wine in Croatia started in the 5th century B.C. when Greek settlers planted vineyards along the Dalmatian coast. Today, Croatian wine companies turn out more than 50 million bottles per year and the country has over 300 wine regions with a large collection of independent producers. One of them, Zlatan Otok, is a wine lover’s paradise on the island of Hvar. 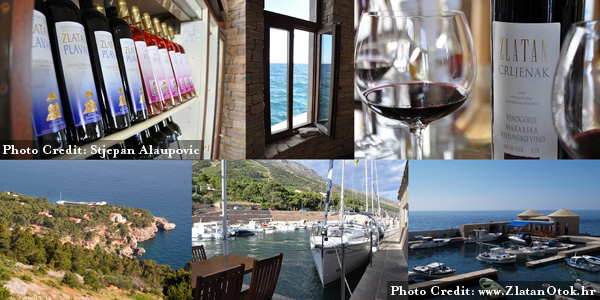 All in the family

The first thing I notice about Zlatan Plenkovi? are his eyes. They’re bloodshot from working ’round the clock, no doubt, but they’re also a brilliant blue-green color. When he talks about his passion for wine, they brighten.

“To me, wine is the only thing you can find that is completely pure,” he proclaims this and then holds a glass up to the light. His goal, he says, is to make wine “the way God intended” – simply and organically with no pesticides. And, he says, of course it has to “taste good.”

What started as a small bed and breakfast on the north side of Hvar, in a small town called Jelsa, has developed into a wine estate – neh, dreamland – called Zlatan Otok. This oenophile’s Neverland Ranch (minus the creepy gloved pop star) is complete with lodging and the Plenkovi?’s Bilo Idro restaurant where you can sample their entire line-up of award-winning wines for nearly the same price of a glass at any other restaurant on the island.

In 1980, Zlatan began selling his homemade wine to friends and guests at his pension. The hometown boy quickly became a hometown hero. In 1989, he started selling his wine in bulk, striking deals with distributors across Croatia and in select U.S. cities. He has won more than 50 awards but still keeps the business a family affair. All three of his kids – Antonia, Nikola and Marin – have a role in the company.

A taste of heaven

Getting to the Zlatan Otok winery is an adventure in itself. Your choices are either to take a (bumpy) taxi boat from the main city square or slowly wind through narrow dirt roads along the island’s edge.

Zlatan may make some of the best wine in Croatia, but he’s also one of the smartest businessmen I’ve met. The only place to dock your boat on that side of the island is right in front of his restaurant. Once my feet were planted firmly on the ground, and the smell of an open-fire grill quelled all feelings of sea sickness, the sheer mass of Zlatan’s operation began to sink in.

This side of Hvar is one massive rolling hill dotted with acres of emerald green vineyards. At the very top of the mountain, just under the cross of the town’s Catholic church, is the winery’s main headquarters. From here, Zlatan’s land stretches down the hill and to the very edge where Hvar meets the Adriatic. It is here, on a handmade wooden dock, where Bilo Idro sits with some of the best wine and views in Croatia.

At the end of our visit we’re standing out front, watching as crystal waves crash against the restaurant’s stone walls. Zlatan is talking about plans for expansion – a seaside infinity-edge pool, a larger hotel and marina – and I start to wonder whether all of these improvements are necessary. To me, this is heaven.

Zlatan reads my mind because as a group of Swiss tourists unload from their yacht (they’ve come from neighboring island, Kor?ula, for the wine and food at Zlatan Otok), he jokes with them:

“You know what’s great about Korcula?” he smiles. “You can see Hvar from it.”

This spectacularly beautiful and historic country boasts nearly 6,000km of coastline and over 1,000 islands draped along the sparkling Adriatic Sea, not to mention medieval cities and beautiful national parks full of wildlife rarely seen in other parts of western Europe.