Newsfeeds are blowing up across social media with stories of people who unwittingly upgraded their Apple device with iOS 8 and… oops. No more service.

Maybe that’s not such a bad thing. No doubt the initial anxiety of complete digital disconnect is discomforting, but perhaps a dead phone is an opportunity to bring a little sanity to a world obsessed with being perpetually connected.

Now a new Kickstarter for NoPhone, which is essentially a hunk of plastic that simulates the look and feel of a smartphone… without any of the actual phone nonsense.

“With a thin, light and completely wireless design, the NoPhone acts as a surrogate to any smart mobile device, enabling you to always have a rectangle of smooth, cold plastic to clutch without forgoing any potential engagement with your direct environment,” the Kickstarter page for the non-device, device says. “Never again experience the unsettling feeling of flesh on flesh when closing your hand.”

The gag really hits home in a week filled with news of technical fails. In fact, the Kickstarter for the NoPhone has already attracted 402 backers who have pledged more than $7,000 — and that’s with 15 days left to go in the campaign.

“Because of the NoPhone, I haven’t drunk texted my ex-boyfriend in one whole week.”

Now, the next reasonable question is: Is this a joke? No. It doesn’t seem to be. It even says so in the F.A.Q. section.

The NoPhone even includes a “Selfie Upgrade.” 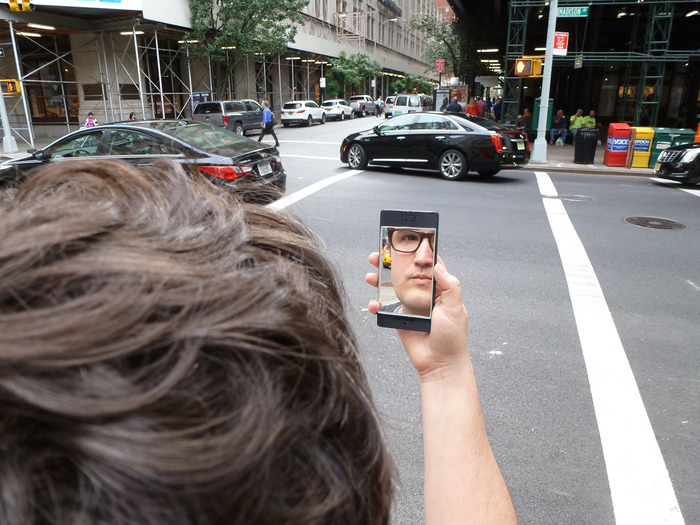 “Enjoy sending yourself selfies in real-time. Share selfies with your friends if they’re standing behind you. Add a verbal hashtag by syncing your brain and vocal cords,” the Kickstarter adds.

One of the best parts about the NoPhone selfie upgrade? Your selfies are safe from hackers.

Maybe the NoPhone isn’t really a reasonable alternative to your smartphone, but the campaign makes a really important point. The whole obsession we’ve developed with these little pocket computers is really fundamentally changing the way we interact, and maybe we need to stop and think about whether that’s such a great thing.

That’s something the brain behind the NoPhone, Van Gould and his team, realized during a friendly night out.

“We are a group of friends from the United States and the Netherlands,” Gould writes about his invention. “The idea of the NoPhone spawned from a night at a bar where we regularly hang out and socialize. And by ‘socialize,’ we mean stare at our phones and occasionally look up from our screens to order another round, which is the norm nowadays.”

You might not need to invest in the NoPhone, but let’s take the hint and put that sucker down for a minute. Funnyman Louis C.K. explains our obsession with our phones and why he won’t get one for his kids really movingly, and hilariously, in this video from his appearance about a year ago on Conan.

Dear disgruntled iPhone users: Here’s how to get your phone working
Could the iPhone 6 be cursed?
There’s a huge virtual drug market on the same app you use to post selfies