Is this our first look at Google’s new music service?

There’s been plenty of talk over the summer about Google releasing a new subscription music service to compete with the likes of Beats Music, Spotify, Pandora, Rhapsody and others. The keen eyes over at Android Police caught a screen grab (right) of what appears to be out first glimpse of YouTube Music Key, the subscription music service slated to take over Google Play. The service will reportedly be like Spotify, but with videos. 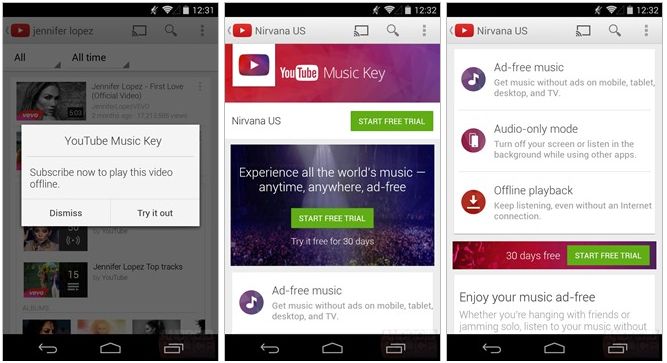 Although there’s no official word on when the service will launch, it looks like it’s just about ready to rock. According to reports, Google has run into delays in getting the service launched because of difficulties cutting deals with content owners, especially small, independent labels. YouTube Music Key subscriptions will offer not only your standard tracks, but full albums, live performances and even remixes along with offline playback.

But one big question remains: Will users who have been conditioned to turn to YouTube for a universe of free, on-demand content be willing to pay $9.99 for an audio-only, commercial-free music service? Only time will tell. But YouTube already boasts a mammoth audience. In June 2014 alone, YouTube attracted more than 153 million unique users, according to comScore.

When you compare Google Play against other subscription music services, it hasn’t performed particularly well. So, what do you think? Are you ready to pay $10 a month for YouTube Music Key when it launches? Will you give it a try during the 30-day free-trial period? Let us know.

Wikipedia’s founder confesses contributors are mostly men
Can this app stop teens from sexting?
Facebook is trying to save you from falling for joke articles