Want to tell your kids a truly terrifying ghost story? Tell them the one about how they could get really fat! At least, that’s what the latest Scooby Doo movie, Frankencreepy, says.

As Scooby Doo, Shaggy and the gang go on their latest mystery-solving psychedelic adventure, they are confronted by the bad guy who curses them with losing the thing they love the most, which in Daphne’s case means going from her usual size two to a horrifying size eight. (Thereby causing every woman who is a size eight — a healthy size by most measures — to reach through the screen and slap the paint off the animators’ fingers.)

Warner Brothers says they intended for the scene to be a positive statement on body image as Daphne, the quintessential Pretty Girl, discovers by the end that “the loss of [her] regular appearance is proven to be a superficial thing, and not what actually matters the most to her.” They add that Fred not only still loves his gal pal but “didn’t even notice” when she gained weight — a statement that I’m not sure is very reassuring. Thanks for being so spacey, Fred. It’s one thing to still love your significant other even when they go through significant physical changes but it’s entirely another to say you didn’t even notice in the first place! 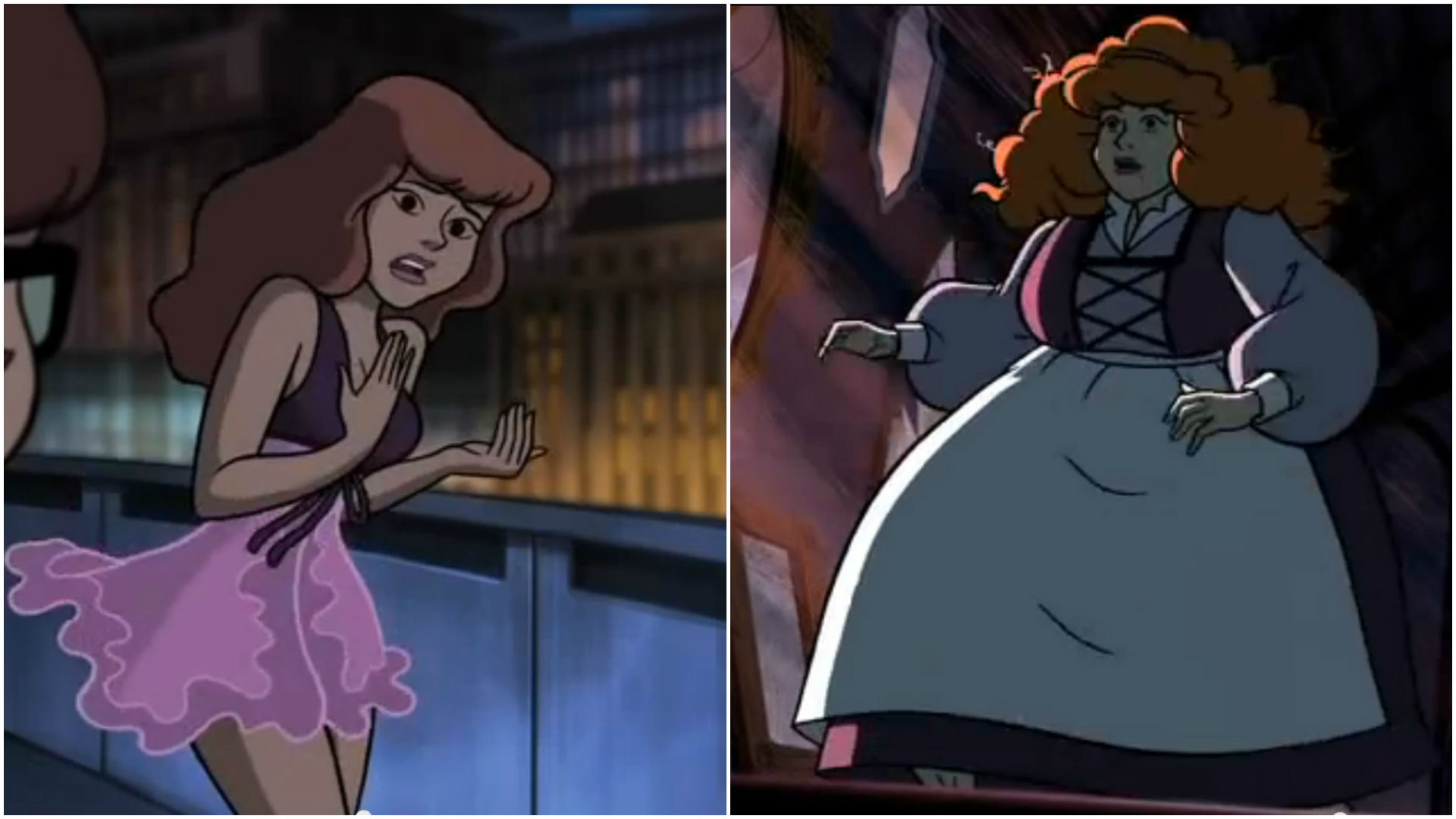 But it’s dubious from the get-go as to whether or not Warner Brothers really knows what they’re talking about as Daphne’s “size eight” frame looks like a Macy’s Day parade float and the only other thing they changed about the eternally vapid girl’s appearance was to frizz-ify her hair. They couldn’t have at least cursed her with a zit or two? A hairy mole? That orange fake tan that’s so popular among starlets these days? There are so many ways to mess with someone’s appearance and yet the first one (and pretty much only one) they picked was her weight. Not to mention that Daphne then deflates as quickly as a balloon — if only real weight loss were as simple!

Outrage over the plot device has been swift and furious as parents have shared their displeasure via social media. “It’s sad to think that my daughter can’t even watch a cartoon about a dog solving mysteries without negative body stereotypes being thrown in her face,” writes Tom Burns on The Good Men Project. Other people have chimed in that if being overweight, or even a size eight, is a “curse” then we’re all doomed.

Yet others are saying it’s been blown out of proportion like this Amazon reviewer who wrote, “I actually have to defend the writers here because Daphne realized she was being superficial throughout that story arc, it added to the story in a meaningful way (it allows her to evade iron face) and most importantly: Fred didn’t notice/care and said that she “always looked good to him.” I would say it was more about acceptance and not being superficial than anything.”

Whether or not that’s what the writers had intended, they had to know they were stepping on a cultural landmine. With constant reports of overweight people being shamed in public places, kicked off of airplanes and mocked mercilessly online — fat shaming is practically the new national sport — gaining weight basically is treated as a horror story in many aspects of our culture. And we’re definitely getting the message. One survey found that women would rather “die or go blind than be seen as fat” while another found that 93 percent of women have tried to lose weight at some point in their lives. But the worst part is the average age girls start thinking they need to diet: Eight.

Women would rather die than be fat. Second graders think they need to diet. This is why we need to stop making weight gain the boogeyman.

9 Signs you’re trying too hard to be perfect
Is vagina shaming cramping your confidence?
16-Year-old human Barbie claims she’s had no plastic surgery