Fashion Week is inherently hectic and full of fashion-savvy people tossing out lingo that might just make your head spin. But have no fear, fledgling fashion darlings… we’ve got you covered. Here’s what you need to know.

In its original incarnation, Fashion Week wasn’t Fashion Week at all. Rather, it was called “Press Week,” the first of which was held in 1943. The idea of creating an organized fashion week in New York was spawned from fashion designers’ inability to travel to Paris to see French fashion shows during World War II. Thus, fashion publicist Eleanor Lambert organized “Press Week” to showcase American designers who had previously been overshadowed by French fashion houses. The week turned out to be a huge success, even leading sartorial-savvy publications like Vogue to start featuring more American designers.

In 1994, the event found its way to New York City’s Bryant Park, where it remains today. The event, which takes place inside a series of large white tents, occurs twice a year — once every February and once every September. It generally lasts around a week and features a diverse cross-section of designers. The most recognized branded event is Mercedes-Benz Fashion Week, but MADE Fashion Week and other independent fashion pop-up shows around town are gaining momentum.

A-line: This simply refers to the cut of a dress or skirt. The term reflects the fact that the dress or skirt is, in fact, similar in shape to the letter A: narrow at the waist and flaring toward the hemline.

Appliqué: Remember the stunning green gown Helen Mirren wore to the Golden Globes earlier this year? The beautiful detailing was appliqué: ornamental needlework by which bits of fabric or beads are sewn onto a large piece of fabric.

Avant-garde: This term is used to describe innovative designs that push the traditional boundaries of style. Just picture pretty much anything worn by Lady Gaga ever, and you’ve got the right idea.

Bias cut: Super popular in the ’90s, this style refers to designs in which the fabric is cut on the diagonal.

Boyfriend: No, this doesn’t refer to that hunky lumberjack you’ll be dragging along with you (or, if you’re smart, leaving at home). Rather, it’s the term for clothing that could have come from your man friend’s closet; i.e., “borrowed from the boyfriend.”

Booker: Don’t worry, this person won’t break your knees — that’s a bookie. Actually, bookers are agents who help models land jobs, navigate the city and such. They also handle the schedule of the models who appear on the catwalk.

Call sheet: Every fashion show has one of these babies, which breaks down the schedule for the day, where the shows are held, contact information for those involved and more.

Casting director: If you’re imaging a casting director from the movies, you’re not far off. Prior to fashion shows, casting directors work with design houses and modeling agencies to match up girls with the specific style of models needed for the runway.

Chandeliers: While it’s entirely possible you will see an ostentatious light fixture or two during Fashion Week, this term actually refers to the long, glamorous earrings dangling from women’s lobes.

Chevron: You can’t swing a stick without hitting this V-shaped stripe (or zig-zag) pattern these days, so chances are you’re well aware of the meaning of this term. And possibly wearing it right now.

Comp card: If you were hoping this means a sweet little ticket that you can “comp” meals to, well, you’re out of luck. It’s actually a cardboard square that models carry around to alert casting directors to their height, measurements, agency info and other pertinent details that could get them booked. 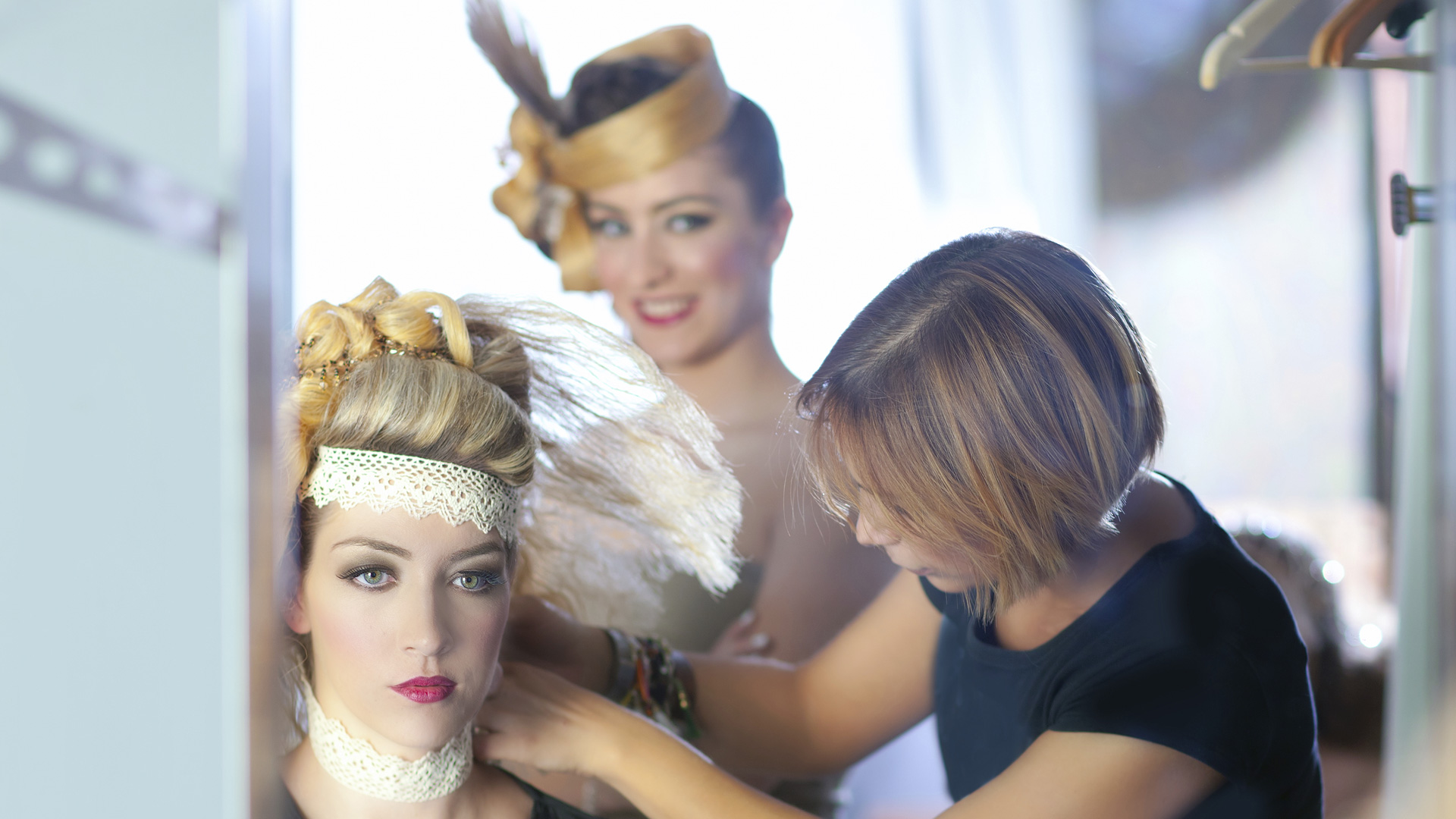 Dresser: Watch a few seasons of The Hills, and you’ll get a sense of what this is from watching Lauren Conrad work backstage at fashion shows. Basically, dressers are facilitators — they keep a show moving by helping models with quick wardrobe changes and styling.

Du jour: If something is mega trendy at the moment, you might say it is the trend “du jour.”

Empire waist: This flattering waistline begins just below the bust and is often characteristic of flowy, ethereal or bohemian-style gowns.

First looks: You wouldn’t have a wedding without having a dress rehearsal first, right? The premise of this term is much the same. Prior to each fashion show, designers get their girls to dress exactly as they would for the fashion show — right down to lining up in order of appearance — so they can finalize and approve the look and order of everything.

Fluted hem: While this silhouette hasn’t gotten nearly as much attention as peplum (more on that in a bit) over the past few years, it’s on the rise now thanks to style-setters putting it back on the map. Slim through the waist and hips, the fluted hem skirt then features a flared and ruffled winding hem below.

Frow: Fashion people are busy. They can’t be bothered to worry about extra syllables. Why say “front row” when you can combine the two and just call it the “frow”?

Glitterati: Hello, Sex and the City! This term, which refers to a group of attractive and stylish people, was used on the iconic HBO series to describe Carrie and the gang.

Haute couture: Translation? Out of our price range. Ha, ha! Only joking. Sort of. Actually, haute couture is a French term meaning “high sewing,” and it refers to the creation of upscale and exclusive custom-fitting clothes… that, yes, are extremely expensive but oh-so-beautiful.

Je ne sais quoi: Another French term, this translates to “I know not what.” Accordingly, it’s used to describe women who have a certain appeal that words just don’t do justice to.

Knife pleat: Pleats may not be the most exciting thing in the world, but this pleat — which consists of sharp, narrow pleats in one direction and often overlapping — is popular, so it won’t kill you to familiarize yourself with it.

Lust-have: Like a must-have but more fashion-centric, a lust-have refers to a fashion item you just have to have. Like, yesterday.

Minaudière: Say it with us: me-nod-yehr. You probably didn’t realize that’s what they’re called, but trust us when we say you’ve seen plenty of these. They are the hard, box-shaped clutches style mavens are often seen toting on the runway or red carpet these days.

Ombré: The gradual change of a shade from light to dark, ombré has some serious staying power.

On-trend: Oh, you thought it was on-trend to say trendy still? How… quaint. Only kidding — we didn’t realize this was the current term for trendy until about 10 minutes ago.

Organza: This pretty, see-through fabric is the stuff Glenda the Good Witch’s dreams are made of.

Passé: Looking for a fancy, fashion-forward way to say something is so over? Look no further. This passive-aggressive term is a fashion editor fave.

Peek-a-boo: Do yourself a favor and don’t start hiding your face in your hands in preparation to play the childhood game. In fashion, peek-a-boo refers to sheer fabric or cut-out details in clothing.

Peplum: Remember up there where we explained fluted hem? This is basically the opposite of that. The cute little ruffle detail is at the waist or hips.

Periscoping: The sad reality is that sometimes you just don’t get that choice seat you want at a fashion show. Sometimes, you’re stuck in the back behind McTallsky, craning your neck to see the runway styles. That’s where periscoping — catching the show through other people’s smart device screens — comes in handy.

Prêt-à-porter: Regular people refer to clothing made for the masses as ready-to-wear. Design folk refer to it by this term. Meh, tomato, to-mah-to, right?

PRgument: If you plan on catching a few shows at Fashion Week in person, you just might find yourself in a PRgument — a tiff with a PR girl about whether or not you actually RSVP’d to a show.

Resee: This is the redo’s chic, style-savvy cousin from the city. And by that, we mean that if an editor really loves a collection they see on the runway, they’ll book a “resee” appointment at the showroom to check it out up close.

Riser: Situated at the end of the runway, the riser is an elevated platform where you’ll see photographers crouching to get prime shots of the runway walkers.

Run of show: This master list details every single look featured in a given runway show, all cataloged in order. It’s kind of a big deal.

Sartorial: This sweet little term is fantastic if you’re looking for a synonym for something fashion- or style-related.

Scallops: Don’t start licking your lips just yet. In the fashion world, scallops are dainty rounded edges located on a garment’s perimeter. They are not, as it were, tasty little mollusks.

Show notes: If you are lucky enough to attend Fashion Week, you’ll find this in your seat at each fashion show. Created to convey key ideas about the collection to the audience, show notes can be incredibly helpful.

Silhouette: Here’s a softball: A silhouette is just the contour of a garment.

Swag swiped: Most fashion shows include some version of a swag bag — a bag filled with samples and other goodies. Fun, right? Not so much fun, though, is when you get swag swiped: another show-goer snatches your goodies when you aren’t looking.

The 3-to-1 shuffle: Not for the faint of heart (aka good girls who are afraid of breaking the rules and/or getting caught), the 3-to-1 shuffle refers to the common showgoer trick of swapping your third-row seat for a front-row one right before a show gets going.

More on beauty and fashion

The RBG Face Masks to Rock This Election Season

Durable Mini Bundt Pans for All Your Baking Needs