Men who scream, taunt and jeer at women in public aren’t just so sexed up they can’t contain it. That’s not what this harassment really is. Men who approach women, or in some cases men, in public to comment on their attractiveness, good or bad, are committing an act of control over another person. The intention behind the act of yelling catcalls at women isn’t to express, “Hey, you seem like a really nice person, maybe we could get to know each other better.” Instead, the message is simply, “I can say or do whatever I want to you because I am more powerful.” It’s an act of aggression, not sexy talk. Not desire. The line between street harassment and violence is frighteningly thin.

A case in point happened recently when a man defended a group of women who were being harassed. The 39-year-old saw a black Nissan pull up next to the women and start harassing them, calling out from the car, as men do every day on every street in America.

What happened next proves all too well that the catcalls aren’t about sexy time or complimenting a woman’s beauty. It’s an act of aggression. The men shouting from the car were already so close to violence that the mundane “Watch what you’re saying” comment prompted one of the harassers to get out and attack the Good Samaritan, putting him in the hospital.

This is a day-to-day way of life for a shocking number of women.

Kearl adds that 23 percent of those women were sexually touched by a stranger and 9 percent were forced to do something sexual.

Women understand this and have learned to adapt by adopting different ways to cope with the harassment. Some ignore it and walk a little faster. Some wear headphones or pretend to talk on the phone. Some change their routes to avoid the men who regularly tell them to “Smile, gorgeous.” As if it was a woman’s job while schlepping to work to provide the perfect upturned lips to brighten the day of the guy jack hammering the street. But that’s about as tame as it gets. Some of the victims of harassment are just little girls.

The clever folks over at Robot Hugs came up with this brilliant cartoon to help us all get a better handle on what street harassment really is and what we can do about it. It addresses the understandable doubts so many men have that men yelling a cheeky compliment from a car is such a big deal, or that it even happens all that often. Remember, a woman with a man is already someone else’s property. No reason to try and claim what already belongs to someone else.

“This kind of harassment is based on the problematic idea that public spaces are actually men’s spaces — that women passing through them are subject to the desires, needs, and opinions of the surrounding men,” the cartoon explains. 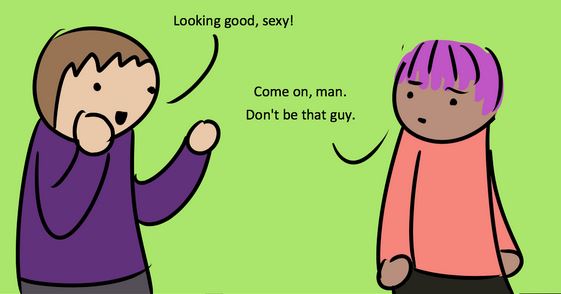 The simple drawings and clear language help explain street harassment in a way that’s neither angry nor overly accusatory. Hopefully, this cartoon can start a dialogue between men and women and help us all deal with street harassment as the aggressive act it is.

“I love that cartoon!” Kearl adds. The next time you experience street harassment, she has a few tips on how to deal.

“I’d suggest to harassed persons to talk about what they experienced,” she says. “It will likely help them feel better, and it will raise awareness about what’s happened. If they want to do something in the moment, it seems doing something that surprises the harasser is the least likely to escalate the situation. For example, saying ‘Don’t harass women’, I usually use this, or ask the harasser to repeat him or herself. Even loudly announcing what the harasser said or did, or asking the harasser if that’s how they want their loved ones spoken to on the streets.”