Sexting, when you think about it, is really an inevitable consequence of teens and connectivity.

There they sit with hormone levels at DEFCON 1 and a smartphone in hand. You do the math. Actually, it’s already been done for you by Canadian officials.

One in six kids who has received a so-called “friend’s” naked picture online has been asked to reciprocate in-kind. That’s a lot of peer pressure to share your privates with every online stalker and horn dog on the planet. The Send This Instead app tries to give teens an easy and smart way to say no, which hopefully takes some of the pressure out of the equation. 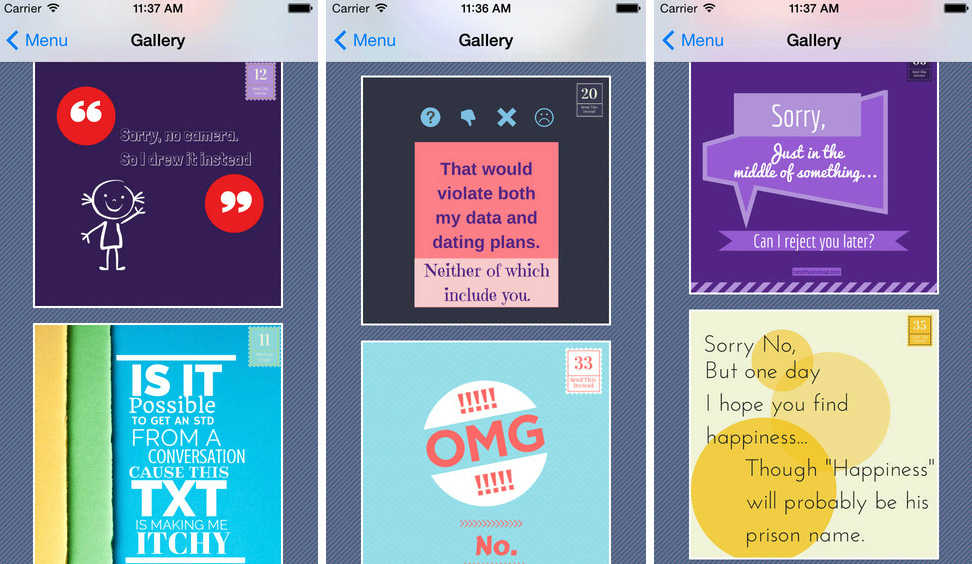 The Sexual Exploitation Unit in Ontario, Canada, is behind the Send This Instead app. To reach teens and keep them from sending nude photos, it needed a better strategy than education and a “Just Say No” campaign for sexting.

“Until now, anti-sexting campaigns have focused on warning kids about the dangers of sending explicit pictures of themselves, but it isn’t working, we need a new strategy,” says the unit’s manager, Inspector Scott Naylor.

So the cops formed an unlikely partnership with comedians, designers and musicians to develop sarcastic and witty responses to requests for provocative pics. The result was the Send This Instead app, now available for free in the Apple App Store and Google Play Store. Some of the responses include “Sorry, just in the middle of something… Can I reject you later?” and “Save the bandwidth… Download a life.”

Not too bad for a teen comeback, right? So, will you download the anti-sexting app? Do you think teens will use it? Let’s hope so. The internet already has all of the naked pictures it will ever need.

Does the world really need a selfie phone?
San Antonio Spurs hire league’s first-ever female assistant coach
Would you pay $12 per month for a Facebook-dedicated phone?